Worth the hype: Tell them I will be in Tsavo

Tsavo West National Park is the only park in Kenya with volcanic activity, where you can get into a river and watch the fish, hippos and crocodiles from inside the river, and of course, the home of the famous man-eating lions.

My chance to finally say, “Tell them I will be in Tsavo,” like Robert Redford said in the romantic 1985 Out of Africa film (which won a whopping seven Oscars) had finally come. My long wait was more than rewarded, and my only complaint about Tsavo West ended up being the fact that you cannot exhaust it. It is massive.

In Tsavo West, you have to be ready to actually travel, because the vastness of the park means the animals are not as densely populated as in other parks, which makes for a great adventure.

I got a hint of what lay in store right from the gate, with all the various wildlife that crossed the road on the hour-long trip to Ngulia Safari Lodge, where we would be staying. The lodge is old – built in 1969, so it looks very vintage from the outset.

The best thing about having been built such a long time ago is that they were clearly able to choose the spot with the best views.

From that vantage point, the park, the plains in the valley below nearly brought tears to my eyes. It looked like a beautifully crafted painting that even the best artiste on earth would not be able to replicate.

That view alone would have had me talking about it for ages, but the other thing is that animals come right up to the watering hole next to the lodge.

So you can just open the curtain in your room or go to your balcony, pull up a chair and watch the dazzling spectacle of various troops of animals coming to drink in turns – baboons, hyenas, elephants - it is a long list.

Elephants, especially, need to drink a lot of water so when a herd shows up, they stay for hours – I watched the members of one herd interacting for a long time and by the time I was done, I felt that I understood their personalities and relationships.

I could have narrated their story to David Attenborough and he would have been impressed.

Just sitting there, I got to see three of the big five – buffalo, elephant – both amazing, but the crown jewel for me were the leopards. In plural. I had never actually seen a leopard, despite looking for them on previous trips to other parks.

My experience has been that the leopard is a shy animal, and unlike lions, which have not a care in the world and do not even budge when they see a vehicle, the leopard has been like the chameleon of the savannah to me – a master of camouflage. They also only come out at night.

I saw at least one every night, including when two of them working together to hunt a poor waterbuck in the middle of the night – but you can imagine how floored I was when we encountered one just lying by the roadside in broad daylight.

When we reversed the van to confirm what we had seen and stopped in disbelief where it was, the young leopard let us look at it for a couple of minutes before having enough of us (I could swear it rolled its eyes!) and disappearing into the long grass.

Our first game drive was courtesy of a jovial and very knowledgeable driver from Ngulia, who seemed to know the history behind every nook and cranny in the park.

A seemingly mundane sight turns into an intriguing scene when he explains what happened there or how it came to be named the way it is.

At one point he regales us with envy-inducing stories of how baby elephants love to play with people who work with them. He used to work at Sheldrick Wildlife Trust, the organisation that rescues and rehabilitates orphaned elephants.

Then we bumped into a Sheldrick Wildlife Trust bus with students from the surrounding area. “They are usually taken for game drives to be taught to appreciate wildlife so that seeds of poaching are never successfully planted in their minds when they grow up,” he told us.

We drove past various kinds of flora, including the sausage tree, which grows in abundance in Tsavo West. It bears the fruit where the famous traditional brew known as muratina comes from.

As we weaved on the road in between shrubbery, Chyulu Hills in the distance, the breathtaking snowcap of Mt Kilimanjaro loomed over the horizon, and then suddenly, seemingly out of nowhere, a black outcrop of rock appeared, growing larger and larger as we drove across it.

It is the Shetani Lava Flow. The path that the molten rock flowed through when the eruption occurred is still very clear, and I could not help but imagine how scary it must have been for residents watching it happen a couple of hundred years ago.

No wonder they called it Shetani because it must have looked like the devil himself had unleashed hell upon them. 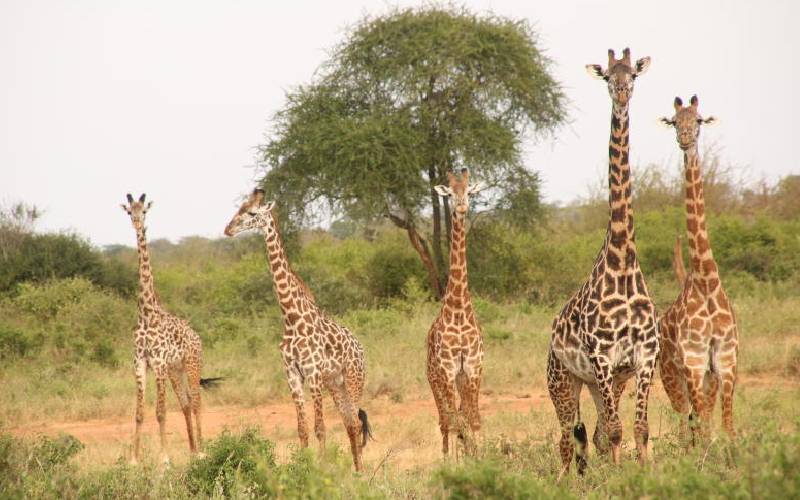 Our next stop was the breathtakingly clear Mzima Springs, whose water is filtered from its source through the volcanic lava rock under the Chyulu Hills in the distance.

The underwater viewing chamber allows you to get into the river itself and marvel at life inside the river as if you were part of it. It is a different world, under there, and I was loath to leave it.

On subsequent game drives, we got to see all sorts of wildlife, and we could have seen them a thousand times more and never been tired. Tsavo is also about culture.

Tsavo West is also known for having been the home of the Ngulia, a sub-tribe of the Kamba people, who were hunters and gatherers. When the area was hived off into a national park, they were displaced from the area and settled around it.

We met Musyoka Ilovoto, born in 1932, who was one of those people. By the time they left the park, they had become farmers, he told us.

You can still find bits of pottery from the days the tribe lived there. And the Ngulia were just like other Kambas, “the same way one cow looks like the other cow,” he hilariously quipped.

He now lives in Mtito Andei, which, when we visited him at one of his fellow dancers’ homesteads, he told us means ‘Forest of Vultures.

“They used to take out people’s eyes!” he said. His job through the years has helped him preserve a lot of the original Kamba culture, as he has been part of a dance troupe that has sung and danced for all presidents of Kenya.

He performed one of their songs for us, and, drumming his heart away; it was clear that it is something he was immensely proud of, and he said that he was not about to stop.

His spirit perfectly captured what was in our souls the day we had to leave, reluctant but happy we got to experience a little of what Tsavo West has to offer – serenity, adventure, joy and a unique feeling that that is where one’s heart belongs.

Finally, Harold and his puppets approached the Soup Rim Court, our highest court, with an aim to have their final appeal for the Prayer Payment Initiative (PPI) heard.

By Muhunyo Maina | 7 minutes ago

By Jayne Rose Gacheri | 12 hours ago

Health and safety: Things to keep in mind when travelling

By Esther Muchene | 12 hours ago

Signs you need to talk
;
Feedback