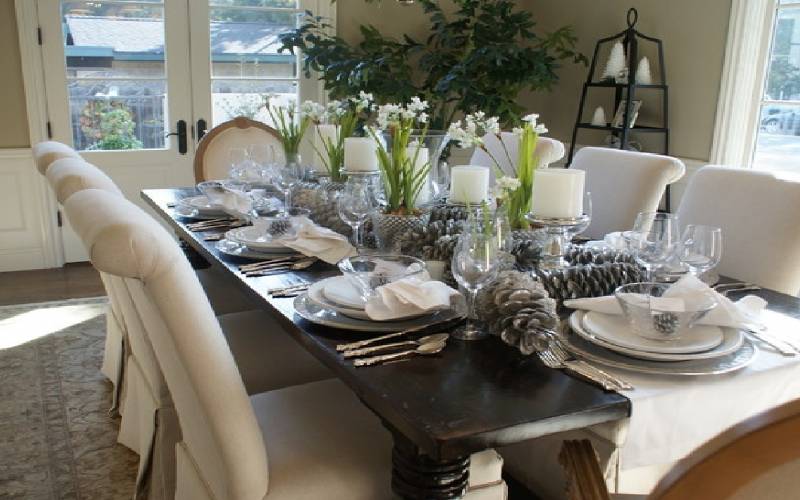 Dear married woman, I have been wondering how you all serve your men food out there. I mean cooked food, not this other one that is well wrapped and hidden.

Sometime last year, I visited a friend for the weekend and her serving method got me asking myself lots of questions. She spent almost half an hour setting the table for dinner just for herself and her husband. Just by looking at the setup, I felt like I had failed my man in my previous marriage.

You see, all I used to do was serve him his food in his plate then swing my hips from the kitchen with his food in one hand and the table mat in the other. Once I get to the dining table, I would stand there and ask him to clear the table before I put the food on it. In most cases, it would be his laptop that needed to be moved. You should have seen how loud I always was as I did this, screaming at him to make it fast as the food was burning my poor fingers.

After putting his food on the table, I would walk back to the kitchen, bring him a glass of water, sink myself in the couch as I grabbed the television remote and ask him to go and eat. I never really bothered to bring him warm water to wash his hands as the dining room had a sink where he could comfortably do that.

Power of the wedding ring

The revolution in marital property

So I was in this friend’s house and she was serving her husband as she always did while I was busy picking lessons from her without her knowledge. By the time she was done with setting the table, you would have thought that King Mswati was coming for dinner. There was his meal, kept hot in serving pots -- unlike mine that came straight from the kitchen on a plate. The table mats had been laid so well that I had concluded that my friend had obsessive-compulsive disorder.

I mean, how else would all the mats be facing the same direction in a specific angle? She had her husband’s drinking water in two jugs, warm and cold, with a glass that was placed face down. The plate and the cutlery were well placed and next to them was a small bowl with tiny pieces of different fruits. I realized I could have been doing it wrong because I never once sliced my husband’s fruits and served them with his meals.

If anything, I would just walk to the kitchen, grab whatever fruit I wanted to eat, wash it and walk to the living room munching it. If he happened to look up at me, I would ask him, “Would you like a fruit?” and if he said yes, I would walk back to the kitchen, wash another fruit and bring it to him in my hand. No plate. Then I would be quick to tell him not to throw the seeds around and we would laugh about it. I am now beginning to think he was faking the laughter. He was probably was wondering where on earth I came from.

So back to my friend. After setting the table, she would warm some water, get a clean towel and stand next to the dining table as she invited the husband to sit down. A table set for two, she and her husband. The way she stood there smiling at her husband as he rose from the couch to the dining table told me a lot about my shortcomings.

Trust me, I spent the better part of the following minutes glued on the pair. They even prayed together before they began eating. Not like I always did. I would just place his glass of water on the table next to his filled plate and shout, “Come and eat, I already prayed in the kitchen!”

I felt so out of place when I saw all this that night. I cringed at the thought of how I left my then fiancé to eat all alone at the dining table while I utilised the opportunity to watch a soap opera on TV. Whenever he rose from the table after his meal and walked towards the kitchen with his plate in hand, I would yell, “Make sure you don’t put the leftovers in the sink with the plate. Throw them in the bin first.” He would laugh out loud and yell back, “sawa.”

So now I ask, am I normal? Is it this the one thing that ended it all? Do you think I failed myself? Was he pretending to be happy with me? I mean, my fellow ladies, just how do you do it?

19 reasons why you are still single

The words you speak

By Sunday correspondent | 1 day ago