There is a message Kenyans are sending to President Uhuru Kenyatta and Deputy President William Ruto. Regardless of tribe, trawling through social media platforms, you will see all manner of jokes and caricatures depicting Uhuru in various shades of abandon and recklessness. Of particular interest is the view they have of the borrowing score with the Chinese and wastage in public spending.

Ruto is depicted not only as a willing accomplice, court jester and soothsayer, but also as painting the picture of a glorious and prosperous Kenya that many don’t seem aware exists. Certainly not the maize farmers in Eldoret, who last week confronted senators about political cartels killing their spirits, skimming their investments and sucking their blood and sweat.

In general terms, Kenyans seem to have concluded that the President and his deputy may not be any different from the Kenyan fathers whose children’s cries are driven by the old and infamous idiom, ‘ponda mali, kufa kwaja’ (feast on your wealth because death in on the way!) Death here analogously is the fact that Uhuru is on his last term and for Ruto, anything that is not about 2022 ni bure kabisa (rubbish). These errant fathers get into a borrowing spree to fund a lifestyle they can ill-afford. They go into grandiose projects that the children will probably pay for after, as the Kikuyu say, their graveyard is a banana plantation. They don’t fear debts because the pain of repaying them will come long after they are gone. Let us not even speak about how extravagantly the money received by this breed of fathers is spent; but we must be careful not to offend the other fathers we are talking about here. You have heard them ask us, ‘kwani hii shamba na pesa ni ya mama yako? (So what, you think this land and money (stolen) belongs to your mother?’)

The alienated children and mother have their own channels of communicating their anger at the tyrannical, carousing and wasteful borrowers they variously call ‘father’ and ‘hubby’. They talk to relatives, pastors and even resort to informal channels like planting appropriate protest messages in the ears of village rumour wags. They also write ‘onyo’ (warning messages) on wooden signposts and post them at night on the fathers’ farms: ‘This land is not for sale’.

The social media arena is the main theatre where Kenyans drive their messages into the President’s and DP’s ears. They mourn the piling up of debt, now at Sh5 trillion! Some have done eCards inviting Kenyans to a harambee in Kasarani, led by the Chinese leader and deputised by US President Trump and our sympathetic son, Barack Obama. The fundraiser is to pay Chinese debts. Others seem to think Ruto has made so much money in his side hustles he can be approached by the Government for a soft loan.

Still others have the person called Kenya (a woman) on a stretcher and a drip. At the front carrying her is Uhuru and the guy holding the stretcher at the rear is Chinese. But you need to see the cartoon to understand what the Chinese is doing to the ‘woman’ as Uhuru trudges on, oblivious of the defilement. Some other cartoons show Kenya being colonised by the Chinese because of loan default.

Mr President and Mr DP, despite those niceties and sweet pictures you are painting, Kenyans are expressing worry that you have lost touch with our reality, that you are mortgaging their future, and that you only care about the power baton in your hands. In fact, they think Ruto is more interested in taking it from you than caring where the country is headed. That is why in one of the representations they depict the two of you running one race but at a junction, Ruto takes the left turn to ‘2022’ while you take the right one - destination ‘legacy’.

Kenyans are saying their bank account of confidence you are withdrawing from is overdrawn. They are crying that you are telling them to wait for cake when they can’t see bread. They think you are making them pay (VAT) for your mistakes. And they think simple Makueni Governor Kivutha Kibwana may be the better option. That they are discussing Prof Kibwana on the same level as you is indeed an insult to what you are doing.

They may be wrong, but then perceptions count in politics. That is what ‘killed’ Raila. That is the serpentine monster coiling slowly around you. You either kill it or it will squeeze the breath out of you by way of the political weapon called Referendum. Many of us are sure you have started hearing the drumbeats of Tracy Chapman’s song, Talkin’ Bout a Revolution.

Uhuru stuck in 4-way junction and choices have consequences 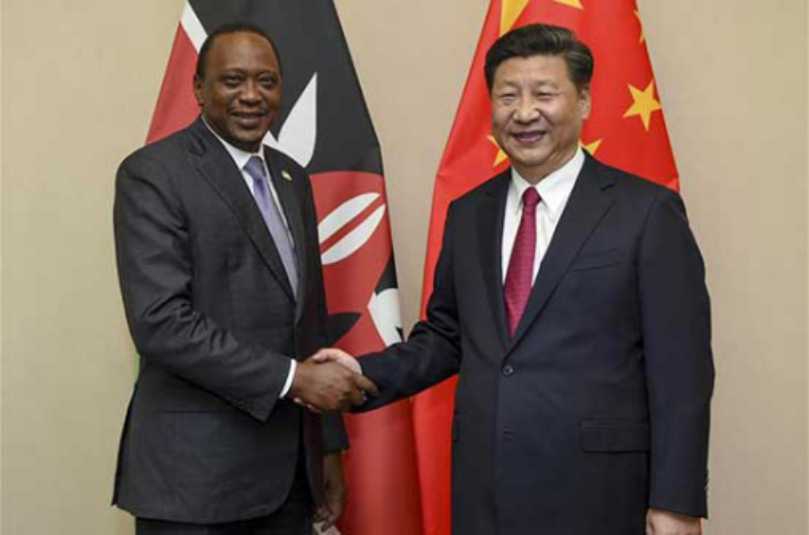 By Kipkoech Tanui | 3 years ago

Pain lies in repaying loans from the Chinese dragon
;
Feedback