On the other hand, Ngunjiri, former Agriculture CS Mwangi Kiunjuri among others represented Kihika’s side.

A confident Ruto said that until they fully negotiated for the hand of  Sen Kihika, they wouldn’t enjoy the food prepared.

“I am aware that there is enough food. However, I don’t think it will reach our stomachs well until negotiations are over,” said Ruto.

He humorously added that he wouldn’t reveal their strategy lest it was leaked out to other men interested in the senator.

“I cannot speak about it here. We have to discuss it away from the gathering or else those people who are prepared to snatch Kihika from Mburu will take advantage and steal her from us,” he said.

Ngunjiri was however confident that they would make Ruto’s side sweat before releasing Kihika.

“I understand that people feel that the DP’s side is powerful. However, we equally have men who will represent our side firmly,” said Ngunjiri.

He said that he had paraded leaders, women and even lawyers to ensure Kihika’s dowry is well negotiated.

Ruto retaliated that his side was strongly represented. “We have come prepared and we have taken all the necessary steps to ensure we get Kihika,” said Ruto. 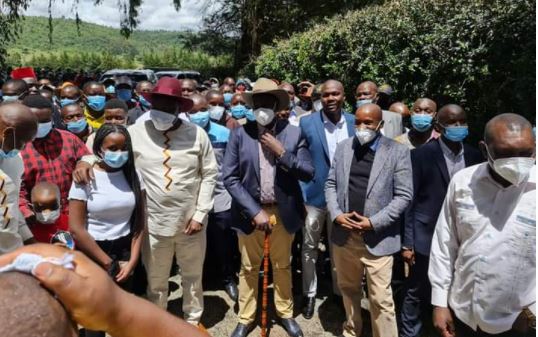 Food and entertainment were served in plenty for visitors.

By Mireri Junior | 14 minutes ago