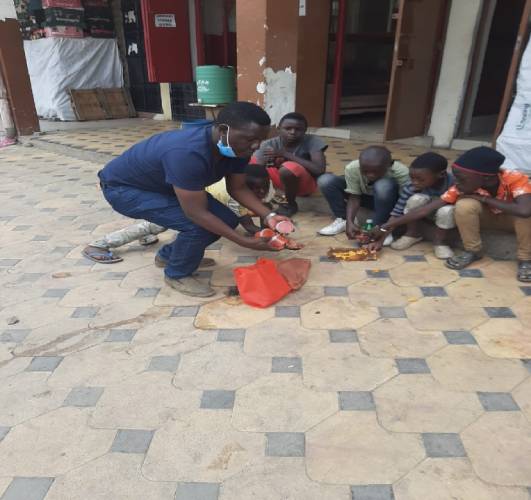 It has been a weekend of giving back to the community. At least, as a way of marking the first Huduma day celebration, that meant a period of community service and prayer.

The spirit of prayer and giving back that started yesterday, at the Statehouse Nairobi, has been trickling down to people of different classes in the society, for the second day running.

On hearing President Uhuru Kenyatta's call to action message to Kenyans during the celebration at the State House Nairobi, Samuel Mong’are, a resident of Imara Daima in Nairobi, was stirred.

He quickly made some arrangements to visit one of whom, he considers the most vulnerable during the coronavirus pandemic. The street families.
As I was walking into the office this morning, I met him, at the globe cinema area in the Capital. Earlier in the Day, he had met another group of needy families at the South C area.

There are differences between them. Young and old. Educated, others were not so educated. Despite, their differences, they have been united by their stories. Stories of misery and hopelessness that have pushed them on the brink of life.

Most of them here, survive from scavenging in the dustbins that flow from the busy hotels in Nairobi city.

But even getting these readily available leftovers, would require a bit of luck. As a result, the majority of them still sleep hungry, in the cold streets.

However, today already looks promising for some. One of the patriotic Kenyans, had, in the spirit of Huduma day, visited them.

Mong'are who took advantage of the Huduma day, which replaced the Moi day celebration, says there is a lot that needs to be done for the ‘stray children’ as he likes to refer to them.

“These are our children, and they too, deserve our care during these hard times,” notes Mong’are.

Despite his busy schedule as an operational manager in one of the major companies in the city, he says that he had to spare this day, by sharing lunch with over 50 of them.

According to the Kenya National Bureau of Statistics KNBS, Kenya has over 46,000 persons living on the streets. Out of this, the majority are from urban centers like Nairobi.

Although the government launched the Street Families Rehabilitation Trust Fund (SFBTF), on March 11, 2003, to address the concerns of homeless, destitute, and vulnerable people in urban areas, nothing much has been forthcoming.

Mong’are is now advocating for legislation to ensure the street children get special training in special schools that focus on their immediate needs.

"We need to have special schools for these children, where they will learn a curriculum that will instill skills to them,” he adds.

With the positive stories coming from the Huduma Day and the subsequent prayer weekend for the country, Mong'are urges Kenyans to keep up the spirit of sharing with the less fortunate, especially during this coronavirus crisis.

"You don't need to have so much. The most important thing is the spirit to give. No matter what you have, “concludes Mong'are.

The government declared Saturday, 10th October as a public holiday, and the weekend for prayer and community service.