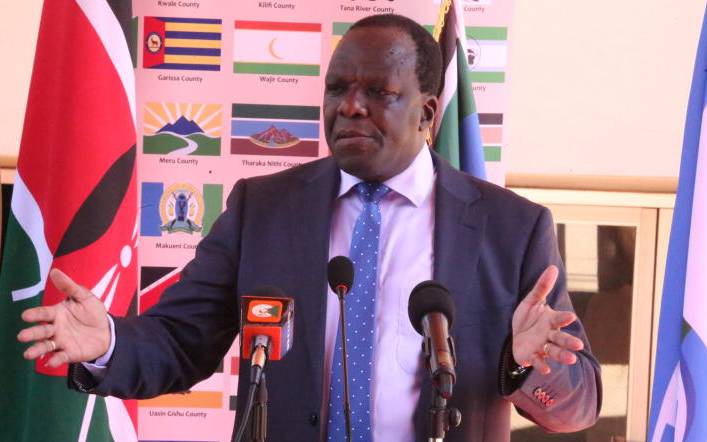 The Council of Governors has appealed for the release of Sh2.3 billion Covid-19 fund that has been allocated to Mombasa, Mandera, Kisumu, Kilifi, Kwale and Kitui counties meant to fight the virus.

Speaking during the virtual Madaraka Day celebrations on Monday, CoG Chairperson Governor Wycliffe Oparanya (above) lauded State’s effort in the fight against the pandemic but also made an appeal for the release of funds.

“The Council of Governors is in consultation with the CS, Health and the CS, National Treasury to fast-track the release of these funds to Counties and we are hopeful that Counties will receive these funds before the end of this financial year,” he stated.

Beside this is Sh5 billion that the Kakamega governor said was set aside by the central government to help the counties fight the virus. He also revealed that counties had stepped up by channelling a total of Sh6.1 billion to the Covid-19 Emergency Fund.

“As we have weekly updated the Country, all the 47 County Governments are fully prepared to respond to the pandemic,” he said.

Oparanya also praised President Uhuru Kenyatta’s role in the implementation of the devolution saying it has added another crucial dimension to handling issues of governance in the country.

“Kenyans have now understood and appreciated Devolution as a system of governance that focuses on self-governance, inclusion and participation of the people in decision making, social and economic development and public accountability.”

CoG leader also spoke of a joint initiative involving central government and the counties in helping the flood victims that have been displaced from their areas of settlements.

“Both the National Government and County Governments partnered to provide emergency response to the victims, however, most of the affected Counties need support within the National Economic Stimulus Program to enable wananchi rebuild their lives and repair the affected infrastructure,” he said.

Meanwhile, Deputy President William Ruto exuded confidence that Kenya would emerge triumphant in the fight against the pandemic.

Speaking during the Madaraka Day celebrations at State House in Nairobi, the DP said that the main focus of the government was to normalise the situation and ensure that schools, places of worship and businesses are opened.

“Every Kenyan in this nation is now part of the big army to deal with the coronavirus,” the DP said.