State plays down fears on lack of ample food 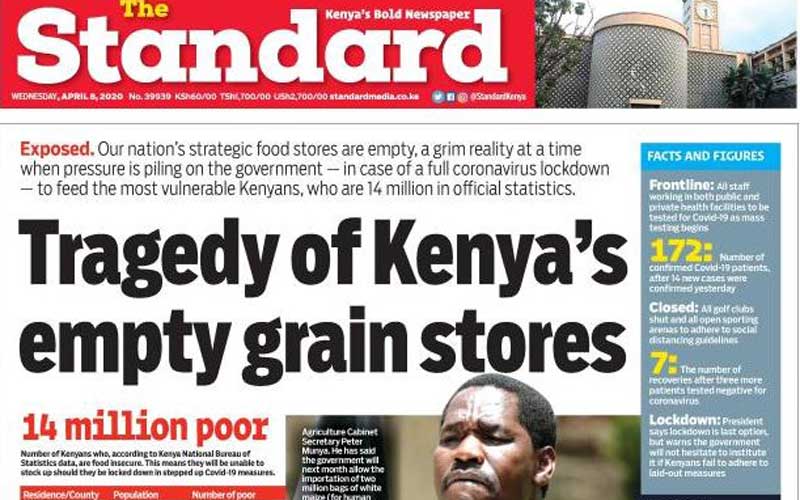 The country has enough food to feed everyone even as it struggles to contain the spread of coronavirus, State officials have said.

In an update yesterday channeled through the Ministry of Agriculture and the Council of Governors, the government said it expects a surplus of 3.4 million bags of maize by June 31 2020.

The update explained that the grain is enough to cushion Kenyans in case of a food shortage emergency.

“Citizens are encouraged not to panic,” the update asserted.

The new information follows revelations by the Strategic Food Reserve (SFR) that the country has no single bag of maize in its stores, even with a possibility of a countrywide lockdown to fight the virus.

Statistics from the Kenya National Bureaus of Statistic (KNBS) show that over 14 million people would need food urgently in case of such a lockdown.

These are people who are considered to be very poor and cannot afford a basic meal.

The government has also asked the private sector to continue buying maize from farmers, and stressed that it will support importers willing to ship maize in.

The maize imports decree is in line with an announcement by Agriculture Cabinet Secretary Peter Munya that the government will allow in two million bags of maize for human consumption and a similar number for animal feed.

“Kenya is ready to feed its population. The government calls on the private sector to buy maize from farmers directly to ensure a continuous flow into the market maintaining fair prices for both farmers and consumers," the update said.

The update further indicated that the government is banking on production in the country’s food baskets during the long rains to cushion citizens from hunger.

“With the long rains in progress, the State is calling upon farmers to intensify production in preparation for coming days that promise a protracted global crisis due to the pandemic,” the update stressed.