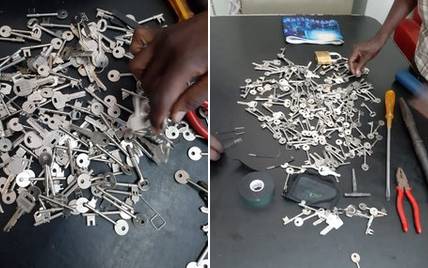 Detectives in Nairobi are holding a 36-year-old woman suspected to be a member of a notorious gang robbing people in the city.

According to the Directorate of Criminal Investigations (DCI), Elizabeth Akinyi was arrested on Saturday night at Nyayo Stadium on Uhuru Highway as she attempted to escape on foot from detectives.

Detectives said three suspects including Akinyi had abandoned the car and tried to escape on foot when the officers nabbed Akinyi.

Two male suspects managed to escape from the officers and are being pursued.

“Akinyi,36, a notorious robbery with violence suspect was today arrested by detectives on Uhuru Highway near Nyayo Stadium as she tried to escape on foot when a suspicious vehicle she and two other males were driving in was intercepted,” DCI tweeted on Sunday.

According to the officers, Akinyi is part of a criminal gang that operates in Kilimani and Gigiri areas and was arrested alongside five other suspects last year.

Akinyi and five other suspects were last year arraigned in Kajiado over robbery-related charges but moved to High Court and were released on a bond of Sh200,000 each.

“The suspect has a series of pending court cases including one where she and other five suspects were arrested for a similar offence on May 18, 2019, arraigned in Kajiado and were denied bond on grounds of being habitual offenders, but moved to the High Court and were released on Sh200,000 each.”

In the May 2019 incident, Akinyi and five others were arrested on account of robbery with violence in Kitengela Estate.

According to the DCI, the six were found with two motor vehicles-Toyota Prado and Nissan Navara, master keys, fake number plates, masking tapes and a safe.

At the time, police said two of the suspects, Elizabeth and Lavender had warrants of arrest for absconding court and jumping bail respectively.

Akinyi will help in the investigations.