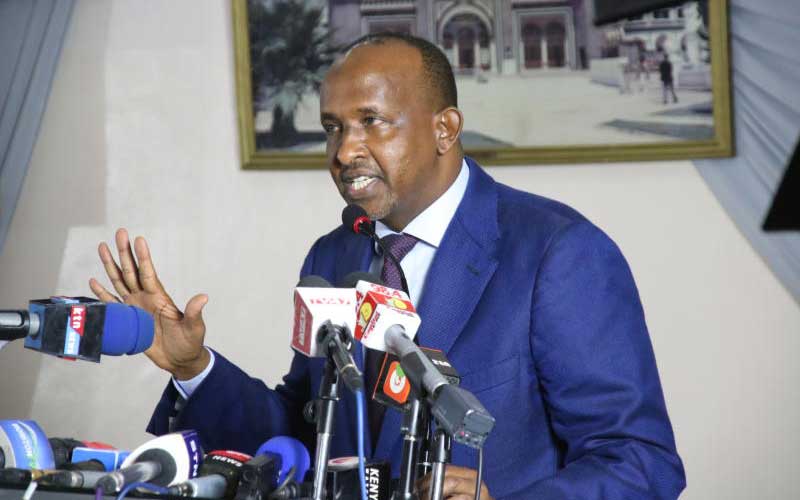 National Assembly Majority Leader Aden Duale (pictured) now says the House is ready to be recalled to facilitate any legislative proposal that could save the economy from total collapse.

He said while other countries have moved to put in place packages to cushion their economies following the serious threat posed by coronavirus, which has led to lockdown of key world economies and disruption of businesses, Kenya was yet to come up with packages, especially to protect the Small and Medium Entreprise (SMEs), which are the key drivers to the economy.

He said the National Assembly was ready to be called from recess to enact any legislative proposals from the Executive to serve as shock absorbers to the already shaken economy.

“Our economy is literally driven by SMEs that absorb the most of workforce and any disruption, as has happened, has major impact on the economy. We still anticipate massive disruption of business as employees have been forced to work from home, while others have literally shut down,” said Duale.

He said it was time the Executive considered improving on the raft of measures that are already in place, including a stimulus package, to protect the economy from crumbling.

Duale is proposing reassigning of the budget and establishment of a long-term government bond of about 50 to 70 years, targeting blue-chip companies as a way of contributing to the said kitty, which will in turn cushion other SMEs and help them to keep afloat.

He also proposed legislative measures that would compel banks to waive interests on all commercial loans, particularly those under the higher purchase scheme, SMEs and the vulnerables.

The legislator argued that additional liquidity measures to banks through monetary instruments may not impact much on the economy as few people would be willing to borrow under the uncertainties caused by the pandemic.

Previous article
Uhuru slashes taxes in plan to ease pain of coronavirus
Next article
Pregnancy made me hate my husband's voice, cooking