Screaming and fighting, governor makes it hard for arresting officers 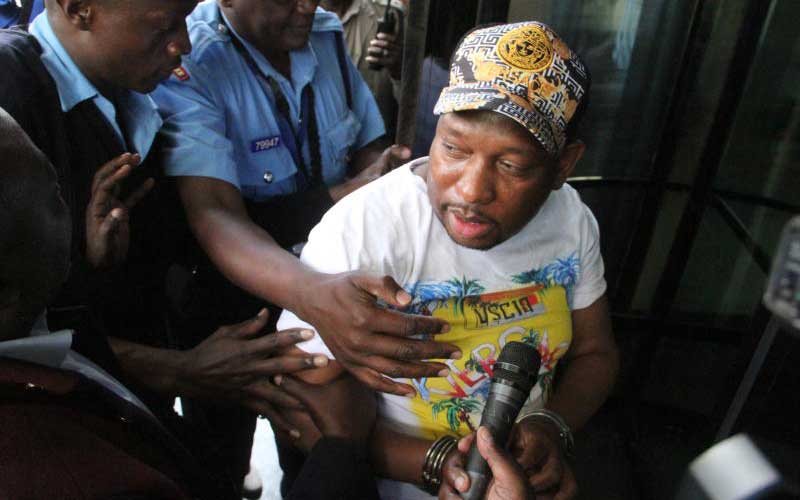 Shortly before noon yesterday, Nairobi Governor Mike Sonko’s flight from authority came to an abrupt end on the plains of Taita Taveta when he was fished out of his car, some 20km outside Voi, and airlifted to the city. Although Sonko’s aides deny he was evading arrest, police suspect he was fleeing towards his home in Kanamai in Kilifi County. They also suspect he had fled Nairobi from an Upperhill location and may have at some point hopped into the inter-county standard gauge railway (SGR) train to Mombasa. His two-car convoy screeched to a halt when they were flagged down at Ndara roadblock near Maungu on the Nairobi-Mombasa highway and within minutes, a panting Sonko was dragged out kicking and swearing.

SEE ALSO: Kanu gets team to boost presence in Coast

Cornered in the wild, vintage Sonko did not go down without a fight. He cursed, spat at and beat anyone he could lay his hands on. Apart from punching and shouting down the policemen at the roadblock, at Voi Police Station and Ikanga airstrip, about four plain clothes pro-Sonko bodyguards beat up anyone in sight, including journalists, as they battled policemen. A swarm of armed GSU and regular police bundled the governor into a police car and drove him to Voi Police Station where he was briefly held. “I will not board the helicopter until I’m told what I have done,” Sonko yelled at the police before he was overpowered and cuffed. OCPDs Monicah Kimani (Mwatate) and Onesmus Kombe (Taita) coordinated the dramatic arrest. Yesterday, Ms Kimani confirmed that the police had raided Sonko’s houses in Nairobi and missed him.

SEE ALSO: Sonko turns to Raila, CJ and Senate in dispute with NMS

“Police had gone to his residence in Nairobi but did not find him. The police were told that the governor had left,” she said. The pro-Sonko group, who had been in a second car, fought police right from the roadblock to the the tarmac of the airstrip, close to the helicopter in which Sonko was flown out. Despite battling police, beating journalists, damaging their equipment and trying to free him from the arresting officers, they were not arrested. Instead, they were allowed to drive away from the airstrip. It is unclear how or when Sonko arrived in Voi, after he allegedly fled from his house in Nairobi’s Upper Hill area. Although an order to arrest him was issued by the Director of Public Prosecutions (DPP) Noordin Haji yesterday morning, it appears that plans to arrest him began on Thursday. An unconfirmed account indicates that Sonko arrived in Voi by the early morning SGR train, where he disembarked and joined the two-vehicle convoy that had apparently driven from Nairobi overnight.

We established that police and intelligence officers from Nairobi and Coast staked out the governor’s residences in Kanamai and Vipingo in Kilifi, as well as Mtopanga in Mombasa, and hotels he frequents. It was also alleged that border posts in Taveta and Lunga Lunga in Taita Taveta and Kwale counties, respectively, were placed on alert when the governor vanished from his home in Nairobi and could also not be traced in Machakos and other towns where he has houses. There was also a stakeout at his rural home in Shimba Hills in Kwale where he grew up but police indicate that there was no sight of the combative governor. Meanwhile, reports from Voi indicate that he was seen several times in Voi early this week. The presence of close to 100 riot and GSU officers at Voi Police Station, where Sonko was held before being airlifted to Nairobi by helicopter from Ikanga airstrip, indicates that contingency plans had been put in place to seize him without a fight. The policemen were mobilised early yesterday morning from Taita, Mwatate and Voi sub-counties. Evidence of struggles were abundant at the airstrip. Sonko, who was in a white t-shirt and a black track suit and grey slacks, was sweating profusely, his jumpers stripped to his waist. His right shoe was missing as he was forced onto the helicopter. Saturday Standard has established that it was not a walk in the park for the EACC and DPP officers to finally seize the governor. First, the EACC boss was forced to terminate the contract of an officer attached to the commission’s police station, suspected to be leaking crucial information to the governor.