Cabinet Secretaries on radar to deliver the Big Four 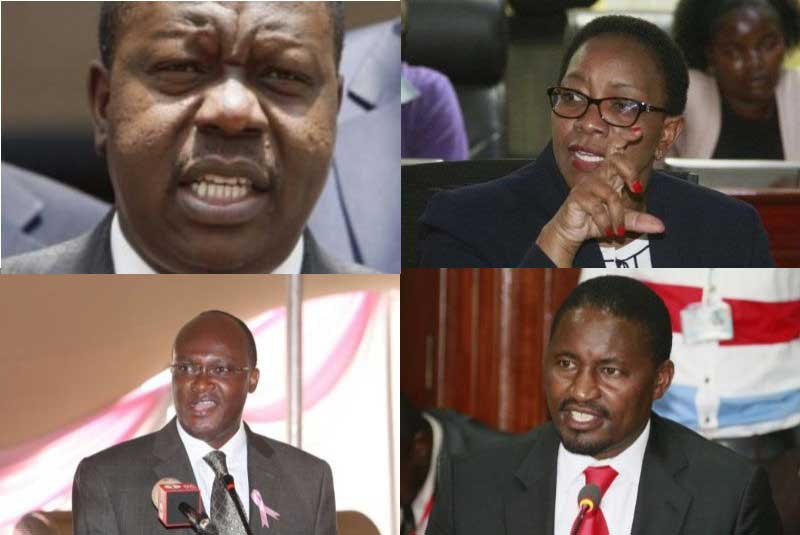 President Uhuru Kenyatta is betting that 2019 will be the year he actualises his development agenda that id based on four pillars - food security, affordable housing, manufacturing and universal healthcare (UHC). He will rely on his foot soldiers, who are members of his Cabinet, to make the agenda a reality amid fears from critics who think it is just another passing cloud. We spoke to the CS, who shared their plans on the agenda.

Access to food is at the centre of the development agenda. We are focused on enhancing food security in the new year by enabling more production through irrigation and provision of water. Specifically, ensuring farmers are not hit by drought, as has been the case in the recent past, should help guarantee food production.

In the first quarter, my ministry will have built a reservoir with the capacity of handling 100,000 cubic metres of water in a selected arid area that should be sufficient to serve between 70-100 acres of land. Over the year, the ministry will expand its irrigation activities to revamping existing dams that may not be up to optimum use.

And to increase diversity of production, we have lined up five million seedlings for distribution for free to farmers in various regions. The seedlings will include fruits, improved avocado varieties, tea and coffee – all which should help improve livelihoods.

As one the President’s Big Four agenda items, we have finalised plans to ensure that provision of affordable housing will be a reality in this country. In this regard, a contractor is already on site for the first project at Park Road, Nairobi.

Further, we are very delighted with the high level of interest shown by developers. As of now, we have lined up Expressions of Interest from reputable developers, with a stock of over one million housing units. These projects will be spread across the country but with special attention to the Nairobi Metropolis. With the support of the World Bank, we are supporting the counties to develop the requisite supporting infrastructure with a fund of over Sh11 billion.

We are looking at a very exciting year ahead critical to our collective dreams of progressively providing accessible, quality and affordable healthcare to all. Our stakeholders are also keenly following the initial rollout already commissioned by the President. By the end of 2019, we will have picked invaluable lessons on how the Universal Health Coverage- Afya Care will be implemented at full scale.

Obviously, we have an idea of where we want to be, but the pilot phase should enable us to precisely and accurately understand how much additional investment is required, and at what level. It is noteworthy that we have the supporting infrastructure including the countrywide deployment of critical medical equipment at tertiary and secondary levels, well trained human resources for health, as well as an unmatched political commitment.

These all provide us with the confidence that we could go to scale before year end. Other major reforms are already underway that are key enablers to achieving our targets, most importantly ensuring the public health insurer is aligned with the UHC pillar. It is my sincere hope that counties will continue to support this noble goal, as they have been during the pilot phase, and that indeed, they will invest more resources towards primary health care

We have had a fairly restive holiday season with less than half reported cases of security related incidents, compared to similar period last year.

This is clear evidence that the country is by and large secure. It is no small feat rather testament our unwavering commitment to our cardinal duty – safety of lives and livelihoods in Kenya.

In the first quarter of the year, we expect to have achieved the following:

A digital Human Resource Information System that will bear accurate, real-time data on each officer, including his recruitment, training, career progress, deployment, family records and other related information. We believe that it will infuse accountability, efficiency, honesty and professionalism among our officers.

Improving officers’ welfare in various areas including their housing to ensure they have decent shelter for their families.  The housing allowance was effected on 1st of December. Notice was issued as appropriate for those that shall vacate institutional accommodation and secure privately rented accommodation. We are going to see a service that is integrated with the community thus, more reachable and responsive to the needs of Kenyans.

Restructuring of the National Police Service command structure to eliminate overlap and duplication in reporting functions and to assign specific and distinct functions to the Deputy Inspector Generals and Director of Criminal Investigations.

Boda boda reforms with an implementation start date of April 1 that is intended to teach them to operate in an orderly manner.

In this regard the operators have to acquire training, get certification, wear helmets and embrace any other safety measures before they start operating.

We have in place a task force whose mandate will include examining the existing policy, institutional, legislative and administrative systems, governing the public service motorcycle sector; compiling comprehensive data regarding the safety, reliability, cost and other matters of interest to consumers.

Job creation has arguably been the weakest link in Government, including in 2018. In five years, manufacturing alone should generate 1 million jobs. But yesterday, Ms Maina said much work has been on laying the ground on developing the right policies to attract investment. “We spent years building the blocks for industrialisation and now the country is ready to reap from the preparations. Target areas for the ministry is the commissioning of a revamped Rivatex factory by March to increase local garments manufacturing. Still, there are new incentive for farmers to get back to growing cotton to slash importation of fabric and yarn.

In the course of the year, there would be several leather parks established throughout the country including through partnerships with private land owners to boost the development of the leather industry. Industrialisation ministry has also completed several policy papers to support investments to new industries such as local manufacturing of automotive parts. That should change the present scenario where local vehicle assemblers import nearly every component. Maina also projects that the launch of the affordable housing program would support local building materials industries by offering a ready market. 2018 has been a year of ingredient preparation especially for the agro-processing sector where our focus would be among other commodities is value addition.”