Patriots long for when tribe won’t matter in national leadership

By Kamotho Waiganjo | 1yr ago 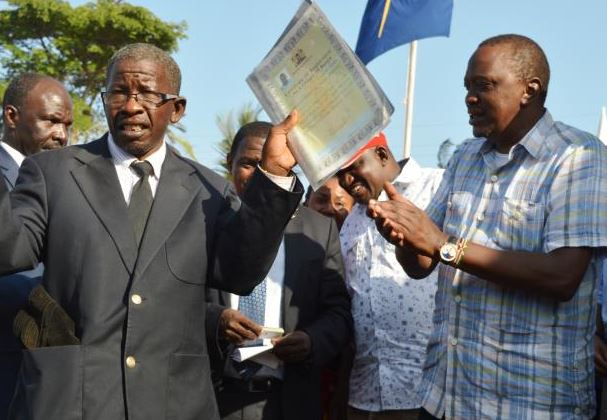 In better times, the President (pictured -right) remarks at Mululu on the “it’s time for others” should have created an opportunity for an open and honest debate about leadership and ethnicity, which we currently only hold in homogenously safe audiences.

For the sake of clarity, no Kenyan worth their name should celebrate the unfortunate reality that ethnicity is such a major consideration in Kenya’s politics. All patriots long for the day when all that will matter for leadership is not the tribe one emanates from but “the content of one’s character”.

It is however the height of naivety, nay dishonesty, to aver that ethnicity is not a significant determinant of our electoral politics. While in polite conversation we can pretend to be “merit-only” nationalists, the reality is ethnicity has been the basis of political mobilisation even before we started competitive presidential polls in 1992.

During the independence struggle, the colonial government applied an ethnic based divide and rule tactic liberally, ensuring that reward and punishment were doled along ethnic lines. Post-independence, the first administration’s nationalist credentials were contaminated by a big tribe-small-tribes divide with the former coalescing around KANU while the small tribes were in KADU.

The winning KANU alliance quickly collapsed after the Kenyatta-Odinga fall out and KANU also absorbed KADU, enabling Kenyatta’s government to cobble a diverse but Kikuyu-loaded coalition to survive the loss of Odinga. Upon Kenyatta’s death, President Moi put together a diverse administration with representation from all ethnic groups but this coalition morphed into a dominantly Kalenjin hegemony with a supporting cast of appointees from other ethnic groups after the 1982 coup.

The second liberation started out as a nationalist movement with the “Young Turks” providing a cross ethnic ideological glue that held the ageing doyens together.

The arrival of Ken Matiba in 1991 and his entry into the presidential race led to the inevitable breakup of the Ford juggernaut into Ford Kenya and Ford Asili. The ensuing elections of 1992 reintroduced ethnic mobilisation with a fervor repeated in 1997.

It was only in 2002 after Raila Odinga’s famous “Kibaki Tosha” that we had a truly united opposition that brought all ethnic chieftains together and produced the Kibaki presidency.

That Kibaki’s opponent was a fellow Kikuyu probably blunted the ethnic flavour of that election.

The NARC unity did not last and by 2007 the political balkanisation of the country was real and the major feature of the elections. Everyone who followed those campaigns knows of the infamous 41 against 1 campaign and it is no wonder that this balkanisation eventually produced the vicious post-election violence of 2008.

The elections post the enactment of the 2010 Constitution have not fundamentally removed ethnic coalescing and mobilisation as the principal determinants of the presidential race. It is no wonder that parties which produce strong presidential candidates are ethnically based. Wiper’s stronghold is Ukambani. URP was strongest in Kalenjin-land. ODM had strong Nyanza base. Even our constitution demands ethnic diversity in all appointments to public office! While Kenyans will in polite conversation commit to “merit-only” leadership, there is an oft unstated concern about the “domination” of the presidency by two of the largest ethnic groups in Kenya, the Kikuyu and Kalenjin since independence. While the “its time for others” has liberally been shouted by politicians during elections, this is the first time that a prominent leader from one of the “privileged” ethnic groups has given national profile to the issue. What complicates the discussion now is the assumption that the President’s statement is intended to stymie William Ruto. I suspect that if President Kenyatta had just rejected another Kikuyu presidency, there would have been broad support!

Whatever the case, this is nevertheless a conversation that Kenya needs to have honestly. Hopefully the conversation would end with a national consensus that merit, including character and competence, as the primary consideration for leadership while affirming that diversity will keep us united.

Preaching the water of nationalism while secretly gobbling the wine of ethnicity is the height of hypocrisy and not useful in building a cohesive Kenya.

Kenyans can smile again after Fifa lifts suspension
Football
By Sammy Kitula
9 mins ago
Premium Duck vs chicken: Which is lucrative?
Livestock
By Dr Watson Messo
41 mins ago
Premium Genesis of tyrannical, corrupt chiefs dates back to 1901
National
By Amos Kareithi
42 mins ago
African first ladies: Let's do more to end infertility stigma
Health & Science
By Rosa Agutu
1 hr ago
.

By Amos Kareithi 42 mins ago
Premium Genesis of tyrannical, corrupt chiefs dates back to 1901

By Dr Watson Messo 41 mins ago
Premium Duck vs chicken: Which is lucrative?