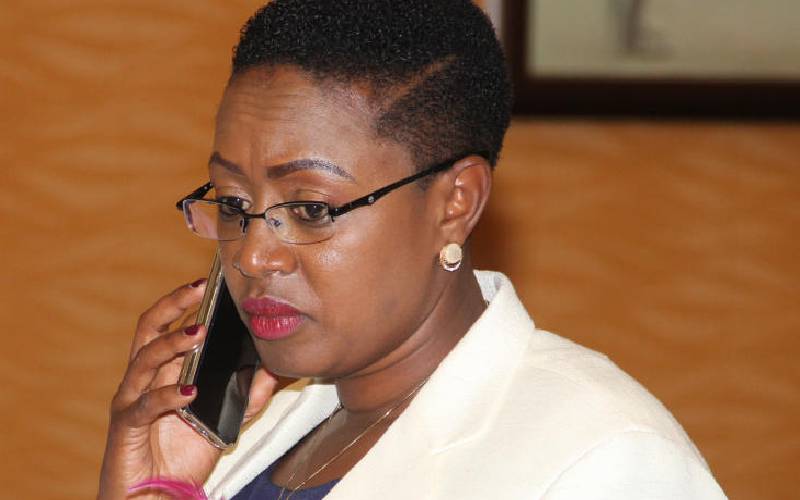 The Government has lost Sh2 billion in penalties after being outsmarted by international contractors supplying medical equipment to counties.

The firms were contracted to equip hospitals in all the 47 counties under the Managed Equipment Service (MES) programme, with delays punishable by hefty penalties.

But during the negotiations, the contractors are said to have beaten the government by capping penalties at Sh3.2 million ($30,000) in case of service shortfalls caused by them.

The government, on the other hand, failed to negotiate limits on any penalties it would accrue in the course of the seven-year contract that kicked off in 2015.

The National Assembly’s Committee on Health, which is chaired by Sabina Chege (pictured), yesterday heard from an audit firm, PKF Kenya, that as at December 2018, taxpayers could only recover Sh28.6 million from the contractors.

“The penalties to be paid by the government are too huge. The contractors protected themselves by capping their penalties,” said Seme MP James Nyikal.

He added, "The contractor has an advantage of Sh324 million ($3 million) in whatever the government does regarding the deal."

For instance, details on the MES challenges tabled before the committee yesterday showed that while contractors delayed installing theatre equipment in 54 hospitals, the loss of value was capped at Sh3.2 million instead of paying the government Sh107 million.

PKF Managing Director David Kabeberi said as at December 2018, the government was to pay the contractors Sh444 million, a figure he said was calculated at 15 per cent of the contract price per day.

Other contract penalty rates, he added, were calculated based on Treasury Bills.

The amount was as a result of delays by the government to pay annual leasing fees and implementation of the contract with five international companies.

An audit report tabled before the committee showed that failure to get advice from experts in different fields, and a survey on the needs of each county’s health facilities, contributed to the delays in implementation of the project, hence the penalties.

Some of the challenges included leasing of equipment to facilities with no electricity, absence of personnel to manage the equipment, or even lack of clean water to operate the machines.

It also emerged that only the government's legal advisers attended the negotiations. Officials from the Finance department were called after the deal had been signed to look at the computations on value for money.

“As it was the first time the MES model was being implemented in Kenya, and considering the magnitude of the project, it was important to have skilled transaction advisers representing the government and the Ministry of Health to ensure success of the project,” reads part of the report.

The audit firm pointed out that the national government should have involved stakeholders in all the 47 counties and taken their views into consideration in the development and implementation of the project.

The committee also queried how the radiology equipment was going to be disposed when the machines become obsolete, given the radioactive risks involved.

When the MES contract ends and the government decides to purchase the machines at $1 each, it will carry the burden of disposing the equipment. Most of the projects are expected to wind up in 2022.

But if a contract for equipment is renewed, or the government terminates a contract prematurely, the contractor is to get rid of its machines without harming the environment.

It also emerged that unlike direct purchasing from the manufacturer that entails training of personnel to operate the equipment, the 47 counties have to train health workers at their own expense, a situation that has left some of the machines gathering dust in medical facilities.

For instance, the audit report shows that in out of the 98 hospitals, radiology machines were not fully operational in four of them due to lack of trained radiographers. Also, three of the 49 hospitals equipped with renal machines had no trained nephrology nurses as at December 31, 2018.

Out of the 96 hospitals that received fully fitted theatres, Chebimet Hospital in Elgeyo Marakwet, Gesima (Nyamira), Baragoi (Samburu), Emuhaya (Vihiga) and Kacheliba (West Pokot) had not operationalised the facilities due to lack of theatre nurses.

The Health committee heard that some of the radiology equipment was supplied to hospitals without regular power supply. In another 20 hospitals, X-Ray machines cannot be used unless the electricity supply is upgraded.

A dialysis machine was installed in Kapenguria Hospital despite the facility having no electricity.

With most of the medical equipment having a life span of two to seven years, the government is said to have saved money by leasing instead of buying the machines.

The MES project has supplied and installed 254 dialysis machines (five per county). As at December 2017, the contractor (Belico S R) had invoiced the Treasury Sh1.3 billion, an amount that is to be subjected to withholding tax. The company had also been slapped with a penalty of Sh27,000 for performance failure.

The PKF report shows the government was to save Sh275 million in the first three years of leasing renal equipment compared to buying at a cost of Sh5.5 billion.

In its recommendations on MES, PKF said differences in demand for specific medical equipment and services across the country should be considered in future delivery models. Due diligence should also be conducted to ascertain the existing demand for services.