Woman, 90, first patient to get Covid-19 vaccine in UK 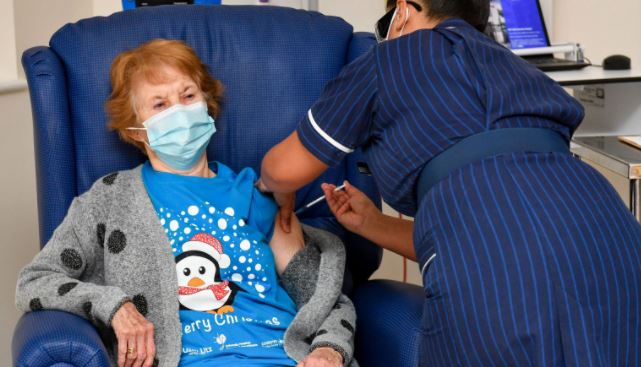 A 90-year-old granny from Northern Ireland is the first person to be given the new Covid-19 vaccine outside clinical trials as the United Kingdom makes a huge step in the fight against the virus.

The United Kingdom last week approved the Pfizer/BioNTech Covid-19 vaccine for widespread use, becoming the first country to make the landmark decision. UK then ordered 40 million doses -- enough to vaccinate 20 million people with two shots each.

Margaret Keenan (pictured) was given the jab on Tuesday morning at her local hospital in Coventry, West Mids, local media reported.

She will receive another jab in 21 days to ensure she has the best chance of being protected against Covid-19.

Margaret, who turns 91 next week, said she feels so privileged to be the first person vaccinated against Covid-19.

“It’s the best early birthday present I could wish for because it means I can finally look forward to spending time with my family and friends in the New Year after being on my own for most of the year,” she said.

BBC reported the second person to receive the jab is called William Shakespeare. He hails from Warwickshire.

The UK had promised to make the vaccine available to its citizens this week.

It is not yet clear when more doses will arrive from the manufacturers, Pfizer Inc and BioNTech SE, who developed the vaccine.

Last week, the companies said they are ready to deliver the first doses to the UK.

Pfizer's Chairman and CEO Albert Bourla said they are anticipating further authorisations and approvals, and "are focused on moving with the same level of urgency to safely supply a high-quality vaccine around the world."

The two companies have been gearing up to distribute the experimental vaccine after they announced successful interim data earlier last month.

There have been at least 1,737,900 confirmed cases of coronavirus in the United Kingdom, according to Public Health England. As of Tuesday, 61,434 people had died.

By Ayoki Onyango 20h ago
Why Maasais eat lots of red meat, but hardly suffer gout

By Kennedy Gachuhin And Valentine Zablon 20h ago
With this ovarian tumor, a woman can lose uterus
.

By Mactilda Mbenywe 20h ago
Mitumba: Blessing to economy, curse to environment

By Karan Gandhi 1d ago
Beware, the pancreas is a 'nasty, unforgiving organ'