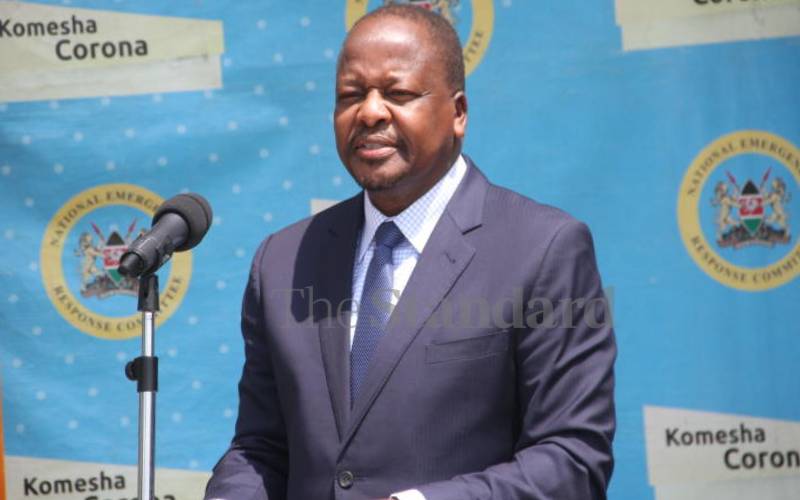 Kenya’s Covid-19 positivity rate now stands at 10.7 per cent after 660 people tested positive for the disease from a sample of 6,176.

Health Cabinet Secretary Mutahi Kagwe (pictured) said the youngest is a four-month-old infant while the oldest is 102 years.

Today 812 patients have recovered from the disease, with 519 from various health facilities countrywide and 293 from the Home-Based and Isolation Care programme.

“Total recoveries now stand at 122,018 of whom 88,479 are from the Home Based Care and Isolation programme, while 33,539 are from various health facilities.”

Six patients have succumbed to the disease, pushing the cumulative fatalities to 3,434.

A total of 1,059 patients are currently admitted to various health facilities countrywide, while 4,812 patients are under the Home Based Isolation and Care programme.

Some 89 patients are in the Intensive Care Unit (ICU), 25 of whom are on ventilatory support and 51 on supplemental oxygen. CS Kagwe said 13 patients are under observation.

Another 114 patients are separately on supplemental oxygen with 109 of them in general wards and five in High Dependency Units (HDU).

The uptake of the second dose among those who received their first dose is at 17.3 per cent, with the majority being women at 56.4 per cent while men are at 43.6 per cent.

The proportion of adults fully vaccinated is still less than one per cent, CS Kagwe said.

Data from Kisumu county government indicates that about 80-90 per cent of Covid-19 patients are infected with the deadly Delta variant.