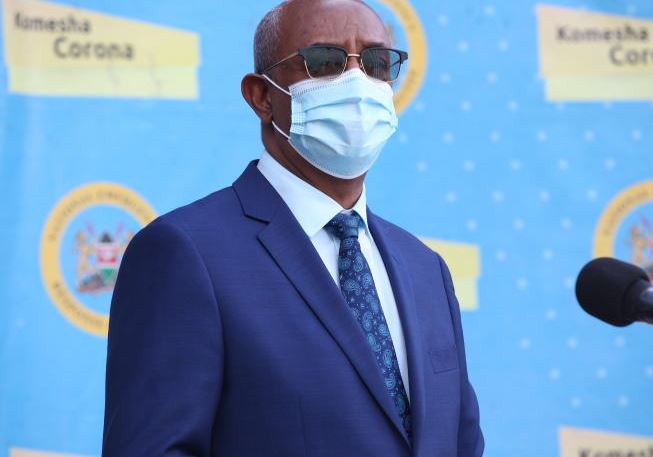 Coronavirus cases in the country have passed the 40,000th mark after 271 people tested positive for the disease.

On Thursday, Health CAS Dr Rashid Aman (pictured) announced that the Ministry had tested at least 5,034 samples in the last 24 hours.

Noting the growing infections, CAS Aman warned Kenyans against relaxing the Covid-19 health guidelines as has been witnessed lately.

"Do not lower your guard when it comes to fighting this disease, particularly avoid social and political gatherings. Leaders need to set the right examples," he said.

Also present during the tour of Trans Nzoia Teaching and Referral Hospital in Kitale, Governor Patrick Khaemba echoed the CAS's sentiments saying that since schools will reopen soon, there is need to reinforce the Covid-19 measures.

Kenya has also recorded 31,710 recoveries since the first case was confirmed on March 13.

This is after fifty-one people were discharged- twenty-nine from various hospitals and 22 who were under the home-based care programme.

The country has also lost another three patients to the disease, bringing fatalities to 751.

Dr Aman also noted with concern that counties that have been registering low Covid-19 cases are now on an upward trend.

For instance, Trans Nzoia which played host to Health Ministry officials today has recorded 67 cases in the last week alone, all which are community transmissions.

"Something needs to be done to curtail the spread of this virus. Effective Tuesday this week, we placed Nairobi Remand Prison under lockdown and these measures could extend to other prisons should the infections continue rising," he pointed out.

The youngest is a one-year-old infant while the oldest is an 83-year-old male.

The Ministry said it is in the final stages of developing a road map for eye care health services which will be people-centered.

This even as the world celebrates World Sight Day, aimed at taking stock of the achievements made so far.

According to Dr Aman, Kenya has at least 7.5 million people with eye needs. However, the Ministry has only been able to cater to 1/5 of that population, which it says it has laid out procedures to ensure that more needs are addressed.