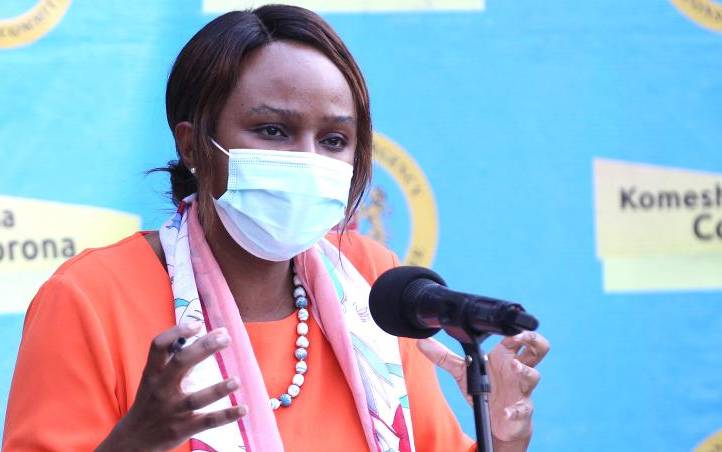 Ten Kenyans have died of Covid-19 disease in the past 24 hours.

In a daily Covid-19 status update, Health Chief Administrative Secretary Dr Mercy Mwangangi (pictured above) said that the country now has 634 deaths. The new deaths signify a rise in the number of fatalities coming at a time that the infection rate is going down.

The new cases doubled, rising from 48 noted on Monday (yesterday) to 96 in a sample size of 2,370. The country now has a total caseload of 36,301. The CAS has said that only four of the new cases are foreign nationals.

Out of the new cases, 70 are males while 26 are females, and the youngest patient is a five-year-old child while the oldest is 80-year-old.

But on the positive side, 121 recoveries have recovered from the disease, with 96 of them coming from home-based care while the remaining 24 being discharged from various hospitals. This brings the total number of recoveries to 23,188.

During the address, Dr Mwangangi warned the media against misrepresenting information saying it could mislead the public and roil the fight against the disease.

She was referring to some reports that had alleged that Kenya could be headed for the second wave of infection like Israel, which has so far gone into a second lockdown. The CAS said that the country was just registering low numbers, and that, it should not be misjudged as a situation where the curve is flattening.

She emphasised the need to observe the containment measures so that infections do not thrive.

At the same time, she announced a partnership between the Ministry of Health and Centre for Disease Control and Prevention (CDC), aimed at protecting frontline health workers.

The partnership is based on a prevention program to ensure quality health services for patients as well as cushioning health workers from infections. At their disposal is Sh180 million (USD1.8 million) to fund various health projects. The program rolls under Kenya Infection Prevention Control through which health workers will receive immunization for Hepatitis B, currently prevalent in the country.

“Healthcare workers inherently by nature of their work, are at higher risk of infection,” said Dr Mwangangi.