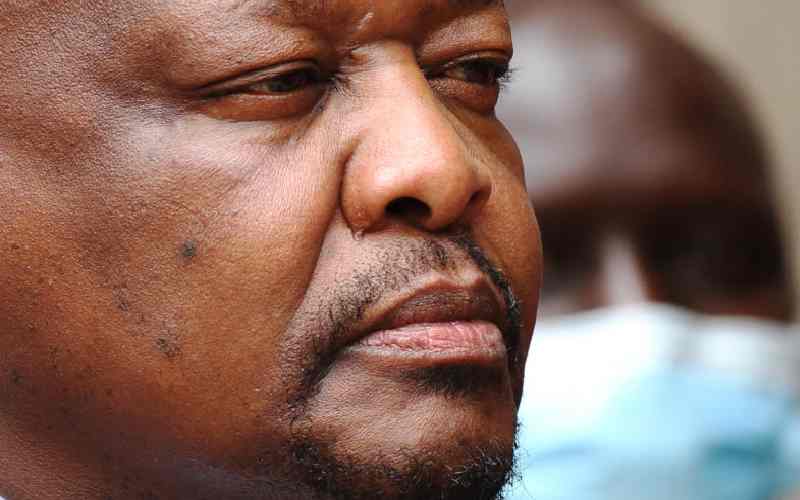 It has been five months since the first Covid-19 case was confirmed in the country. In the last 24 hours, some 6,814 samples were tested and 727 turned positive. Five of these were in Kisii.

Men continued to lead the number of infections at 539 against 188 women who tested positive.

The national infections tally now stands at 25,138 with all 47 counties having had a confirmed Covid-19 case.

CS Kagwe on Friday said with the transmissions at the community level, it is paramount that counties have the capacity to handle their cases and avoid referrals.

The Health Ministry officials were in Kisii county, where they were received by Senator Sam Ongeri, Governor James Ongwae and Council of Governors chairman Wycliffe Oparanya.

Oparanya said counties have received Sh29.7 billion for June that will aid the fight against coronavirus spread.

He criticised leaders taking advantage of the pandemic and embezzling Covid funds.

Ongwae also cautioned counties against putting too much attention on Covid-19 and neglecting other diseases such as cancer.

Kagwe noted that there has been a dip in the number of patients visiting hospitals for other ailments.

He reiterated that Covid-19 services are offered in designated areas, and those in need of medical attention need not be afraid of seeking professional care.

Kisii County has more than 300 beds and preparing 100 more to boost its preparedness for coronavirus.

Ongwae admitted that the county has not paid health workers' salaries, promising it would be done latest Tuesday.

Ongeri urged the residents to take seriously government's advice on the disease, adding that there were still people who think the disease is a hoax.

Also present was Interior CS Fred Matiang'i, who urged counties to liaise with the national government to boost efforts against the spread of the disease.

Poor health-seeking behaviour and the long turnaround time of Covid-19 test results are some of the reasons why Kenya is recording a high number of people dying from the disease.

According to the Ministry of Health's situational report dated August 5th, 93 per cent of the cases in Kenya are asymptomatic.

The leading clinical signs are cough, with 52 per cent followed by fever (39), difficulty in breathing (29), and headache (12).

The country’s testing protocol prioritises persons exhibiting symptoms, which means their cases should be caught early and managed before deteriorating. However, this is not the case.

“The long turnaround time for relaying laboratory results to clients in most counties is causing a delay in public health action,” the Ministry admits to this in the situational report.

The Ministry of Health has highlighted an inconsistent supply of test kits and reagents to meet the general demand as this is a global pandemic.

A shortage of test kits and reagents has forced the government to revise its discharge protocols of Covid-19 patients.

The latest protocols by the Ministry of Health (MoH) now dictate that as long as a patient does not exhibit fever three days after all the other symptoms have cleared, they can be discharged without necessarily taking another test.

These changes follow projections detailed in a Ministry of Health document that shows up to 42 million Kenyans can get infected by January 2021, which represents 88 per cent of the population.

However, using the current estimates of transmission in Kenya, the document titled Targeted Testing Strategy for Corona Virus Disease (2019) in Kenya, projects that 68 per cent — 32.6 million Kenyans — will be infected by November 2021.

“If 68 per cent of the Kenyan population ends up infected, and assuming that 10 to 15 per cent of those will be symptomatic and will, therefore, need medical attention and testing, then in a population of 48 million people, at least 3,264,000 to 4,896,000 people will need at least two tests each,” reads the document.

Let us hold our horses on schools’ reopening