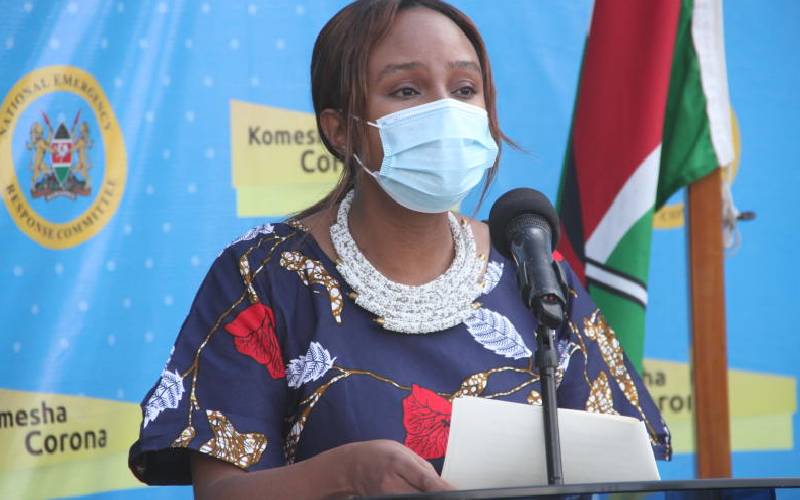 Mombasa has today surpassed Nairobi in new coronavirus infection cases.
Health CAS Mercy Mwangangi (pictured) today said 67 new cases were reported in the county, followed by almost half of them in Nairobi's 31.
The national tally now stands at 2,474 after 134 people tested positive for the virus. The cases include 131 Kenyans and three foreigners.
The new cases are also spread in Busia (15), Machakos (five), Taita Taveta (four), Kilifi (two), Nakuru (two) and one each in Garissa, Murang'a, Kisumu, Uasin Gishu and Kaiado.
In Busia, all the new cases were from truck drivers from the border point as well as the five in Taita Taveta.
Taita Taveta was among the counties that for a while had not recorded any cases. However, the majority of their cases are from truck drivers, who have been a weak link in the fight against coronavirus since it was reported in Kenya on March 13.
Part of the challenge includes the harmony between Kenya and the border countries such as Uganda and Tanzania. Kenyan truck drivers have criticised the manner in which they are handled on the Tanzanian or Ugandan side, sometimes even citing harassment.
The order from the Health ministry dictates that the drivers must obtain a clearance certificate before they are allowed in or out.
Speaking at Afya House during the national update on Covid-19, Dr Mwangangi praised Kenyans for following the rules on restrictions and containment measures to curb disease spread, which she admitted have disrupted residents' routines.
As we hasten the defeat, the CAS said it is important to adopt to behaviour change that limits disease transmission.
Dr Mwangangi insisted that there is a need to pay close attention to the housing estates as the disease is now at the community level.
"Collective effort of residents, regardless of their condition, is needed to contain the coronavirus pandemic."
The CAS urged counties to play their role in flattening the infection curve. At the same time, she praised Mombasa county, which she says has put measures in place to aid mass testing that includes the vulnerable such as people living with mental disability.
Questions have been raised on why the numbers in Mombasa keep going up when the county administration seems to put measures in place to curb the virus.
Old Town is one of the two estates kept under lockdwon to reduce Covid-19 spread. Mass testing and fumigation at the ferry have also been effected, yet still, the numbers keep rising.
As infection rates continue to go up, the ministry insisted that counties have to enhance their preparedness in dealing with the coronavirus.
Some Sh5 billion has already been disbursed to the counties to aid the fight against Covid-19 in steps that include the upgrade of health facilities.