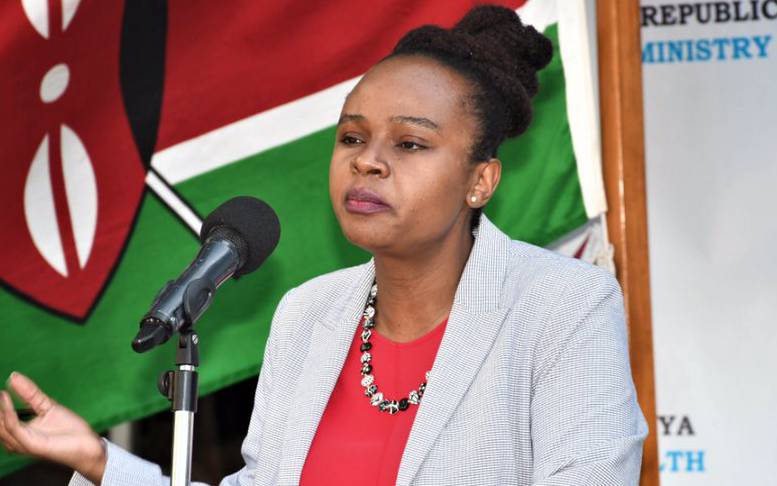 The government has not received official reports of 17 Members of Parliament and senators testing positive for Covid-19.

During this evening’s routine press briefing on the status of Covid-19 in the country, Ministry of Health Cabinet Administrative Secretary Dr Mercy Mwangangi (above) said: "… we did see the headlines reporting that there are positive cases of coronavirus in Parliament…but as it stands today and at this time, we have no official reporting of these cases to the Ministry of Health”.

This comes after two local dailies reported that 17 legislators had tested positive for Covid-19 after giving samples to Pathologists Lancet Kenya (PLK) to run the scan.

The reports alleged that the legislators may have contracted the various after mingling with other members of the public in social gatherings such as weddings and funerals.

But while responding to the media reports, PLK dismissed them as “entirely false”.

It added, “In particular, information circulating both in terms of purported numbers and names of people who have allegedly tested positive for Covid-19 is entirely false.”

Nonetheless, Lancet Kenya said that their testing is on a voluntary basis. The laboratory said it was commissioned by Parliament to test the legislators and is bound by law to only channel the test results to the doctors of the respective legislators.

It said that it had no mandate to announce the results of those tested because that would amount to taking up the duty of the Ministry of Health.

“Any person who turns positive for COVID-19 is informed individually by the doctors. Besides, the Ministry of Health is the only authority mandated to release COVID-19 positive results to the public,” it said.

The media reports generated storm as legislators whose names were mentioned denied they were Covid-19 positive.

They include Dagoretti North MP Simba Arati who refuted the claims saying that he did not test positive for the virus and has been following the health safety tips religiously since the outbreak.

Siaya Senator James Orengo did the same and shared his lab test results from Lancet.

Luyai MP Caleb Amisi came out guns blazing branding the reports as ‘alarmist and with no basis.’  Amisi maintained that he was negative calling the source that generated the story was a ‘gutter press.’

“I participated in the voluntary testing for MPs as directed by the Parliamentary leadership and the results came out negative for Covid-19,” he said.

Murang’a Senator Irungu Kangata said that he had not taken the test adding that the reports should be ignored.

He said: “Ignore the propaganda in the gutter press. I haven't taken a Covid-19 test. I will do so soon. Busy at home editing my PhD thesis.”

By MERCY ADHIAMBO | 8h ago