Health & Science
The government is awaiting test results to determine if a student who arrived in the country this week from China has the deadly coronavirus. 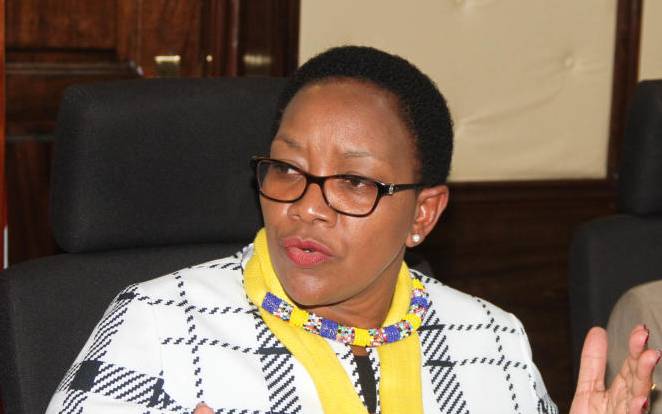 The government is awaiting test results to determine if a student who arrived in the country this week from China has the deadly coronavirus. Speaking during a briefing at the Ministry of Health headquarters yesterday, outgoing Health Cabinet Secretary Sicily Kariuki (pictured) said the government had sent samples collected from the student to South Africa for further tests. The student landed at the Jomo Kenyatta International Airport on Tuesday and was taken to hospital straight away after it was suspected that he was infected with the coronavirus.

He has been in isolation at the Kenyatta National Hospital (KNH) since. “The suspected patient continues to be in isolation at the Kenyatta National Hospital as we await the results of samples we sent to South Africa for a second opinion," Ms Kariuki said. A source at KNH, who did not want to be identified, told The Standard that the student, aside from exhibiting flu-like symptoms consistent with coronavirus, is okay and is being quarantined at the hospital’s Infectious Diseases Unit next to the hospice. The isolation, said the source, was only a precautionary measure. The source said only a few trained experts have access to the student.

Kariuki allayed fears over the government’s ability to handle the virus, saying samples were sent to South Africa to determine the final results beyond any reasonable doubt. “The fact that we sent samples to South Africa does not mean we lack capacity. We have an influenza centre of excellence here in Kenya. In a situation like this, it is good to be certain beyond any reasonable doubt,” she said. Kariuki said the government had successfully dealt with other suspected cases of the virus apart from the isolated patient at KNH: “We have had other suspected cases and we were able to isolate them and run tests. We let them go because our investigations confirmed the symptoms they were exhibiting were not of coronavirus," she affirmed. By yesterday evening, the global death toll from the virus had reached 170, with confirmed cases reaching 7,711, according to The New York Times. An overwhelming majority of the cases are in China where the viral outbreak occurred on December 1, 2019.

Kariuki asked Kenyans who have been in China in the last two weeks to test for the virus since the incubation period is two weeks. She announced a travel advisory by the government, cautioning Kenyans against travelling out of the country unless it is absolutely necessary. She said the government would scale up response according to advisories by KNH. Kariuki said all travellers entering Kenya would be screened, regardless of the country of origin, as opposed to a few days ago when only travellers from China were screened. She said the government had sensitised health workers on the symptoms to look out for while increasing vigilance in medical facilities.