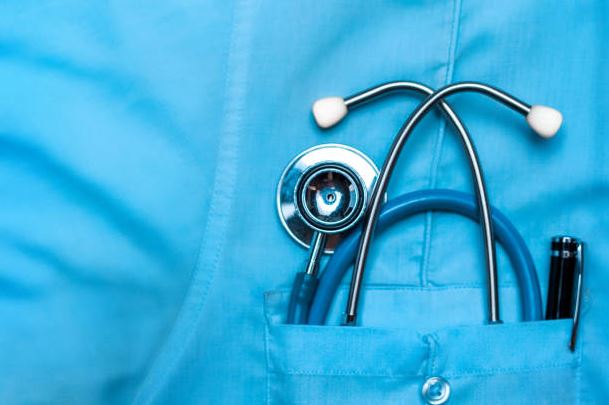 Taxpayers have over the past four years spent their hard-earned money to pay for the leasing of mattresses, baby cots, basins, microwave ovens as well as razor blades in the controversial medical equipment leasing scheme imposed on counties.

Shocking details have emerged over the list of products that were leased to health facilities in the counties with some items such as syringes, bed-side lockers, refrigerators, electric kettles, trolleys, stethoscopes, drip stands and other items that ordinarily ought to have been purchased by the counties or the Ministry of Health.

Investigation by Saturday Standard reveals that some equipment was overpriced, yet many had short lifespan or were even disposable defeating the purpose of a programme originally set up to avoid a situation where counties operate without standard equipment but is increasingly looking like a bottomless pit in which taxpayers could potentially lose billions of shillings.

In one of the agreements, a copy of which Saturday Standard obtained, counties had to pay Sh14 million for a simple operating theatre lamp. For an instruments' trolley, counties were billed some Sh560,000 while resuscitators gobbled up Sh11.2 million.

Counties will be billed Sh1,050,000 for a stretcher while surgical instrument sets are Sh14 million and a linen trolley was billed at Sh280,000 at the end of the period.

Notably, though counties were having these amounts debited from their accounts annually, a significant number of equipment are yet to be delivered begging the question why the billing was happening before the delivery of the equipment.

For the first time, pressure from senators who staged a walk-out on the Health Cabinet Secretary Sicily Kariuki, Chief Administrative Secretary Rashid Aman, and Principal Secretary Peter Tum yielded some results, they revealed the details of the deal with the five companies supplying various medical equipment to counties. 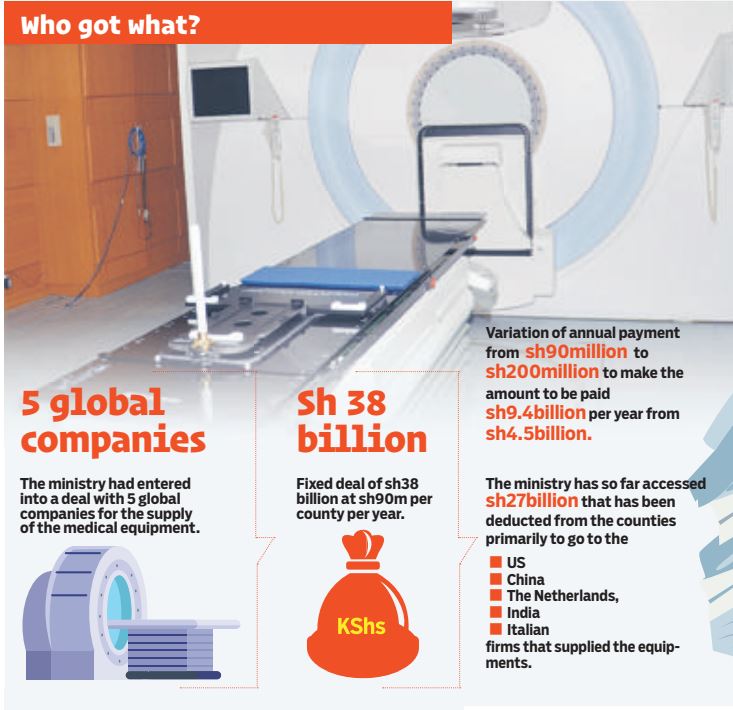 Senators, in a heated House session attended by the CS poked holes on the scheme, questioning the hike in cost from an estimated Sh38 billion to the current Sh63 billion. While appearing before the Senate, Ministry of Health officials explained away the Sh25 billion variance, arguing that they had intended to equip additional 21 hospitals. The Cabinet Secretary also attributed this variance to the fluctuating performance of the dollar against the shilling.

It has also emerged that there are counties which have been consistently billed by the national government yet no medical equipment has been delivered to date.

In Trans Nzoia, no single machine has been delivered despite the county government paying for the same since 2015. Even Bomet where the former Governor Isaac Ruto declined to sign the MoU has received no equipment but paid for the same upfront.

Also Kacheliba, Kabarnet, Baragoi and Garbatula in West Pokot, Baringo, Samburu and Isiolo counties have equipment delivered but they are not operational.

But this success comes with challenges of lack of qualified personnel, a lack of electricity connection and a lack of water dents on one of President Uhuru Kenyatta’s pet projects.

The original scheme, at a cost of Sh38 billion, would see each county pay Sh665 million at the end of leasing period. However, the varied figure where each county is paying Sh200million, will see it pay Sh1.3 billion to the end of seven years.

In 2015, the counties had estimated that if they were to do an outright purchase of all the equipment leased, meeting the US/EU standards, it would cost each county Sh181.6 million at the then prevailing market rates for two hospitals in the same period. They argued that a six year 7.5 per cent Value Service Contract would total Sh41.3 million each bringing the overall cost of the equipment to Sh 223 million over the seven years.

In 2015, then chair of Council of Governors Isaac Ruto went to court to oppose the involvement of national government in what was a purely devolved function. His predecessor then, who is the current Cabinet Secretary for Trade Peter Munya wrote to Ethics and Anti-Corruption Commission (EACC) Chief Executive Office Halaque Wako, raising a red flag over the subject.

Mr Munya had sought EACC involvement to confirm whether the contractual agreements met economic and ethics rules and other laws as laid out in the Constitution.

“This will ensure the Governors are not held responsible for any misdeeds related to this project. It is important to note that the National Government has neglected to make available the main contract with contractors that are providing the equipment and other services during the life of the project,” he faulted then.

“The National Government has however forwarded an MoU to each county to sign. Once the county signs, the MOoU becomes biding and effective. The MoU is similar for all the counties and the list of equipment is the same,” stated Munya.

He complained that the entire process had been undertaken by the ministry without consultation with counties as required by law.

“However due to pressure, the council has agreed to sign the MoU as they await answers to the outstanding issues,” he said.

As he and his counterparts gave in, tenders were being awarded. Among those who got the lucrative deals include Shenzen Midray Bio-Electronics Company of China which dealing with theatre equipment supplied to 96 hospitals at a cost of Sh47 billion, while Esteem Industries of India dealing with CSSD and surgical instruments was awarded a contract of Sh9 billion to supply to 96 hospitals complete with sterilising and surgical sets for all operations.

Others include Bello SRL of Italy dealing with renal and dialysis machines which got a contract of Sh2.4 billion to supply the machines to the 47 counties and two national referral hospitals. Philips Medical Systems of Netherlands secured a Sh3.7 billion deal to supply ICU equipment to 11 hospitals.

While General Electric (GE) of USA won a Sh25.5 billion contract to supply radiology equipment where 98 hospitals are expected to be equipped with X-rays, ultrasounds and other imaging equipment.

The CS explained that the contract for laboratory and health ICT has not been completed. The laboratory contract to cost Sh1.1 billion while HICT will cost Sh4.7 billion with counties paying Sh970,000 annually for five years.

“Last year in October the tendering process of HICT went through and the documents are still with National Treasury and the Office of the Attorney General. Once the information is availed to the ministry, we will proceed to award,” said the CS.

In spite of this admission by the CS, her ministry wrote to Nyamira County introducing an additional two suppliers, Neusofi Medical Systems Company Limited and Megascope Healthcare Kenya Limited for the installation of the computerised tomography CT Scan, which ought to be part of the HICT project still under tendering. Senators questioned why the two were not awarded alongside others.

“The process of procurement delays was not anticipated. The services for the laboratory and health technology was left out to ensure due process is attained,” explained Health PS Peter Tum.

As more details emerge over the now controversial scheme, senators are demanding an itemised schedule showing the actual costs of all equipment supplied, and where they were supplied.

“The document provided is incomplete. It does not state the counties supplied,” said Majority leader Kipchumba Murkomen.