NAIROBI: How did you land the job as the Director for Africa, Technical Cooperation Department at International Atomic Energy Agency (IAEA)?

I was nominated by the Government of Kenya and of course met the requirements. I went through the process like any other individual, where you are engaged by the authorities of the organisation. There were other candidates but I emerged top and was offered the position.

So what is your role in the agency?

My responsibility is to look at the Division of Africa with 45-member states of which 26 are least developed countries. We do planning, programming, implementing and monitoring the technical cooperation programme in accordance with the IAEA guidelines. I also manage the financial and human resources of the division. Initiate partnership with donors and private sector and advocate for peaceful utilisation of nuclear technology. I am also an advisor to the deputy director general of IAEA on trends and priority for Africa.

Our director general Yukiya Amano motto is Atoms for Peace and Development. Therefore we ensure in partnership with members states we use nuclear technology for social and economic development.

Kenya wants to embrace nuclear power to address energy shortage. Is this a viable project in your opinion?

Yes it is a viable project. At the IAEA we do not tell a country what to do, we only give them the technical advice and assist them go through their aspiration. If Kenya decides to adopt nuclear power she will be advised accordingly. It has its own challenges, of course, as you know about Japan case a few years ago, when a Tsunami destroyed a nuclear plant. It has little to do with technology directly. That’s why we emphasize at the IAEA on step-by-step process so that all requirements are met. There are about 19 milestones in three phases. If you are keen and you have the resources, then it will take you about 12 years, or longer. United Arab Emirates is among the new comers and it took them about 10 years. It’s doable in my opinion and I see Kenya is on track, moving from Phase one to two. It requires political support and public awareness and participation.

Developed countries like Germany are gradually abandoning nuclear energy in favour of other safer forms of energy, yet you are encouraging developing ones to adopt it. How do you explain this contradiction?

There is no contradiction. Every technology has advantages and disadvantages. But from where we seat, this is a safe form of technology if you follow all the requirements on safeguards and regulatory infrastructure.

However you must have the right people to run it. You must also put in place adequate safety measures and you must know how to dispose your waste. I know Germany, for example, would like to shut down a number of its plants in a few years to come. However Japan, despite the Tsunami incident, wants to build more. There are 45 new countries actively considering embarking on nuclear power programme.

Do we have the skilled man power in Kenya and Africa to successfully build, operate and maintain nuclear plants?

The answer is we do not have enough. IAEA in addition to every project we emphasize on components of fellowships and training for member countries. I know Kenyans who have gone to Japan, China, France and other countries for training. Capacity building is very key in this venture.

In terms of energy for Africa, the counties that have really embraced this nuclear energy, South Africa is on the top. Egypt, Kenya, Nigeria, Morocco and Ghana are also in the process of acquiring it. The East African Community can decide to come together and have a good nuclear plant and if they produce excess energy, they can always export.

You were the National Commission for Science Technology and Innovation (Nacosti) CEO for years. What structures did you put in place to nurture sciences and technology?

I served at Nacosti from 2008 to 2014. It was during this time that the issue of nuclear energy was discussed. We formed nuclear electricity committee under the advise of National Economic and Social Council, which later became the Kenya Nuclear Electricity Board under the Ministry of Energy. I served in that committee when I was in Nacosti. One area I emphasized on was on the need for the government to embrace technological advancements. It was during my tenure that the government accepted to set aside two percent of the GDP to support science and technology and innovation sector. By the time I left Nacosti, we had trained more than 380 PhDs in different institutions. We had funded conferences in more than 65 institutions. We funded more than 1,400 research projects and about 100 innovators. For the six years at Nacosti, we spend around Sh1.2 billion to support science, technology and innovation.

I adviced the government to set up a Ministry of Science, Technology and Innovation, so that all other research institutions will be anchored here. I also advocated for establishment of science diplomacy.

I urged the government to set up a national research foundation to support research work in the country and the Kenya Innovation Agency, to deal with innovation. I’m happy these are now in advanced stage.

On the fight against against cancer, what support is your organisation extending to developing countries such as Kenya?

In Kenya, cancer is the third cause of death after infectious and cardiovascular diseases, and is responsible for seven per cent of national mortality annually. It is estimated that there are about 39,000 new cases and the annual mortality to be over 27,000.

The Agency, through Programme of Action for Cancer Therapy, helps member states to identify that (cancer) as a priority area of health. What we offer is partnership. I am glad that Kenya is building infrastructure at Kenyatta National Hospital and Moi Teaching and Referral Hospital for radiotherapy.  We also help Kenya and other countries seek support from our strategic donors. In some cases through Technical fund the Agency complements the country initiatives. We offer training, mentorship and installation of machines. We can also procure the machines on behalf of the member states.

You talk science a lot. When and where did the science bug bite you?

I have always wanted to be a scientist. When I was doing my O-levels at Allidina Vishram High School, my goal was to be a doctor. But when I joined Egerton University for my bachelors degree, I studied agricultural sciences. Sciences make me think and makes you more inquisitive. Science is all around us-the food you eat, the water you drink, production of news papers-all is science and the technology.  Later I enrolled for masters at University of Aberdeen, Scotland and PhD in 1995. I taught at Egerton and rose to a full professor at 40 years. I started inspiring other young fellows to look at sciences differently. I remember one time a colleague told me that out of 30 students in Animal Production class, he was only remaining with five. The rest wanted to change to other professions. Nobody was talking about agricultural sciences, they were not fashionable anymore, less pay. We had to explain to the students the opportunities that awaited them out there. It made a difference. Now at IAEA, I am looking at an opportunity to use a branch of science to impact the 46 member states to improve humanity. It’s my mandate to demystify the misconception behind nuclear technology.

How do you spend your free?

I write articles and now in the process of writing a book. I watch movies. I used to play golf but I have slowed down. But most importantly, I am a dairy farmer. I have 20 lactating cows at the Coast. I am also a motivational speaker and spend lot of time with my family too. Recently I took up a position in Umma University as the first substantive vice chancellor. That was an excellent opportunity for me to build what I call inter-faith platform for Christians and Muslims to dialogue and demonstrate that we can live in peace and harmony. Umma is an Islamic-based institution but we have secular programmes. 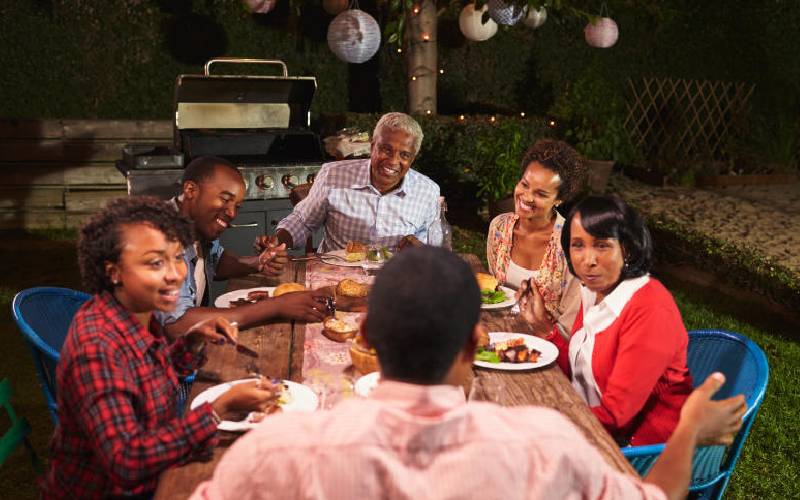