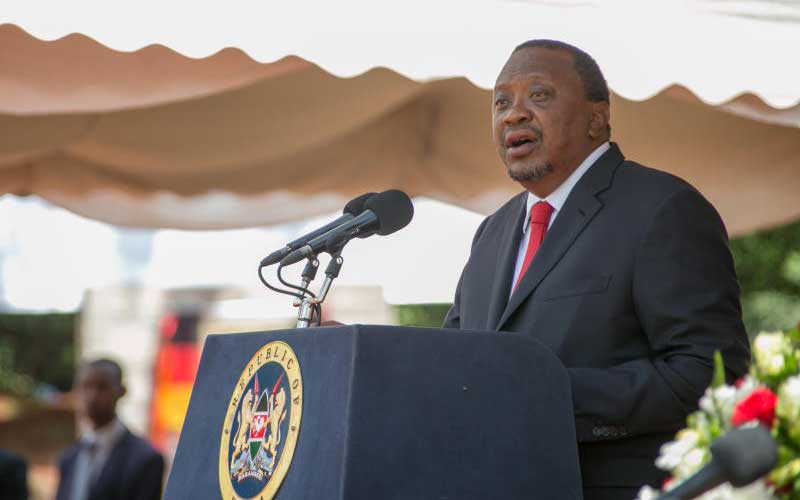 A furious President Uhuru Kenyatta (pictured) yesterday disbanded an inter-ministerial committee over its repeated failures to adequately protect the country from the Corona virus. The President acted just hours after the media and the public piled pressure over the casual manner in which relevant government bodies were handling the global public health emergency. Amid lapses in disaster preparedness and disjointed communication from government, the President, in a terse Executive Order No. 2 of 2020, dissolved the Cabinet Adhoc Committee on Health and the Inter-ministerial Technical Committee on Government Response to the Corona virus outbreak.

The Saturday Standard has learnt that the dissolution of the committee may be as a result of inaction by the group over delays in executing a Corona Virus Action Plan, written and presented to it by a team of experts in January. Multiple interviews with senior technocrats across various ministries show the contingency plan had mapped out the high risk Kenya should be wary of and possibly limit interaction, the different scenarios that could play out in case of infection, response plans to these scenarios as well as a budget line to make all these possible. The dissolved committee had come under public scrutiny after a flight from China landed at the Jomo Kenyatta International Airport (JKIA) on Wednesday, with little to no screening procedures being followed. JKIA, which President Kenyatta described yesterday as a major transit hub in his executive order, remains understaffed and with minimum equipment to help deployed staff screen the hundreds of thousands of passengers transiting through its doors every day. Late Thursday, it was established that not all points of entry were manned and that basic equipment, such as thermometers were barely adequate, a revelation that led Kenyans to question genuineness of efforts the government was putting into place to secure its borders. “Kenya is a major international transport hub, with 70 per cent of international passengers being on transit,” President Kenyatta said. “There is significant threat arising from the potential spread of the Corona Virus to Kenya from countries that have new and ongoing outbreaks of the disease.”

Global emergency Since the World Health Organisation (WHO) declared the outbreak a global emergency, President Kenyatta’s government has come under heavy criticism over the country’s preparedness. “We are shocked at the recklessness with which the government is handling the growing public health crisis posed by the Corona Virus. We do not see neither evidence nor preparedness nor a government actively involved in protecting its citizens from potential harm,” NARC Kenya leader Martha Karua said yesterday. “The government continues to expose our people to the highest possible risks of contracting the Corona virus.” Chief Administrative Secretary for Health Rashid Aman, at a press conference, said the country had set aside 11 beds at the Kenyatta National Hospital (KNH) to deal with the threat of the virus, with little reference to any other precautions.

The country’s only isolation unit has been under construction since early 2018. The isolation unit is a building at Mbagathi Hospital that used to be a maternity wing and has been undergoing a painfully slow refurbishment to convert it into a habitable isolation facility. During its refurbishment period, Kenyans have toyed with disaster as various communicable diseases including Ebola ravage the region. Now, the newly created National Emergency Response Committee has just seven days to make sure the isolation facility is up and running and ready to receive patients, and two weeks to ensure that similar centres are set up in Level 5 and referral hospitals across the country. “There is demonstrable and compelling public interest further up scaling Kenya’s level of preparedness and capacity to respond and contain this emerging global threat,” the President said. New committee As the fallout within government over Corona Virus continues, new Health Cabinet Secretary Mutahi Kagwe, who will chair the new committee was officially handed over the reins of the ministry yesterday after successfully being vetted by the National Assembly. From the comforts of near retirement from politics, Kagwe now finds himself at the centre of one of the world’s biggest health disasters with the sole mandate, as directed by the President, “to immediately take up the role of directing efforts to ensure Kenyans remain safe”. Other members in the committee are Foreign Affairs, Transport, Defence, ICT CSs as well as PS from these ministries and director generals from Medical Services, Transport and Immigration Services. Missing from the list is Interior Cabinet Secretary Fred Matiang’i. The Corona Virus has manifested internationally across multiple continents, with escalating numbers of new cases reported in different isolated countries and through varied travel mediums. Testing kits Earlier, government Spokesman Cyrus Oguna insisted that the country was well equipped to deal with the ongoing outbreak, saying the government had bought testing kits and that they will no longer have to send samples to South Africa for testing as has been the norm. On January 31, WHO declared the outbreak a global health emergency as it rapidly spread outside China. It is believed that many low and middle-income countries such as Kenya lack the tools to spot or contain the virus, raising the fear that once infection occurs in these countries, the disease could spread uncontrollably and that it may go unnoticed for some time. The first Corona Virus case was reported on December 31 in China’s Wuhan Province and has already claimed thousands of lives, leaving tens of thousands more infected.