After spending months self-distancing, out of action, owing to the Covid-19 pandemic, finally, the Harambee Stars captain Victor Wanyama has resumed training with his new side Montreal Impact.

The former Tottenham Hotspurs midfielder took to twitter, with excitement, of being back to the pitch.

The sensation shared a photo of himself in the training ground captioning the picture with ball and love hearts emojis: 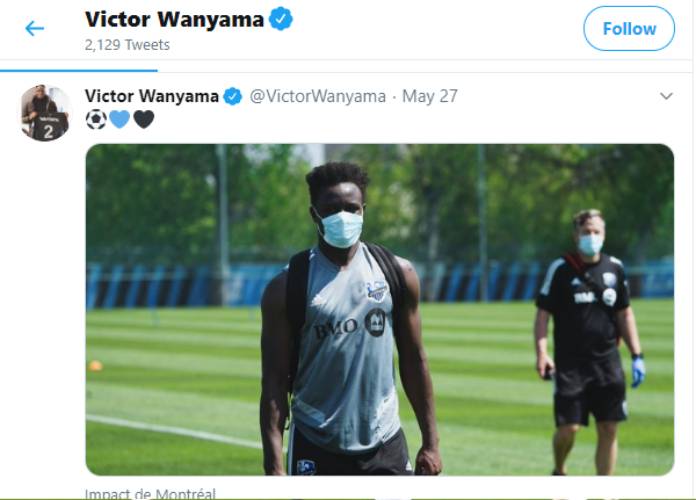 The Kenyan ace is among players in the Canadian league, Major League Soccer (MLS), who were forced to train from their homes after the coronavirus whirlwind hit the globe.

As a result, MLS was halted in mid-march, paving way for the government to devise ways to contain the deadly virus.
Wanyama’s return to training, signals the return of the Canadian league. The gesture, which is a sigh of relief to thirsty soccer fans, could be a confirmation of the statement from the MLS which announced that football return was in the offing.

The league organizers gave a green light to footballers to resume outdoor controlled training for individual workouts. This, however, must be within the strict guidelines of the safety protocols which were put in place in consultation with the medics in the infectious disease department.

“The individual player workout protocol prohibits access to club facilities including but not limited to locker rooms, team gyms, and team training rooms.

Team gyms and training rooms may still only be accessed by players receiving post-operative and rehabilitation treatment, as directed by the club’s Chief Medical Officer," the statement read in part.

In addition, the teams were directed to submit signed documents of how they would ensure no spread of the virus while in training. The statement proceeds:

“Prior to initiating any individual player workouts, every team must submit to MLS a club-specific plan that outlines how the team will implement health and safety protocols.

All plans must be reviewed and approved by the club’s medical staff and local infectious disease expert before submitting it to MLS. Every club will designate a member of the staff to oversee adherence to MLS-recommended protocols and club-specific implementation plan.”

These guidelines will also be scrutinized to ensure strict adherence by the players. Teams would carry the cross if the safety rules are flouted.

“In addition, each club will also be responsible for confirming communication of these protocols to players and team staff,” adds the statement.

Wanyama moved to Montreal Impact on a free transfer on March 4th on a deal that would see him offer his services for 3 years at the club.

The shocking move came after the 28-year old fell in the pecking order in the midfield at the North London based team.

Wanyama revealed that his playing time suffered due to forces above Jose Mourinho in the club’s hierarchy. The effect was that the star spent most of his time on the bench than in action.

“The first thing [Mourinho] told me, he was wondering why I wasn’t playing. I have to be playing. The problem wasn’t with the coach if you ask me. The problem was a little bit upstairs and they didn’t give me a chance,” he said.

He further added that the issues with Spurs’ upper management started back in 2017 when he suffered a knee cartilage injury during a pre-season and missed the first half of the season.

“I was not given the chance to come back,” he laments. ”They tried to frustrate me. They gave me one game after four months, or three months, so it was a little bit tough.”

The celebrated Kenyan player continued with further revelations of incessant hurdles on and out of the field.
”I was frustrated. I wanted to get my happiness back, my football happiness back. That’s when the manager here, Thierry [Henry] called me and asked if I wanted to play. And I said yes, “exudes Wanyama.

Despite all these last-minute bottlenecks, Wanyama still thanked his former team for all the support and opportunity to hone his football skills.

"I want to thank @SpursOfficial fans for all the support over these past years, we have shared great times together from finishing 2nd in EPL to reaching the champions league finals, I will always be grateful for having been able to play for @SpursOfficial #COYS."

The Harambee Stars captain, however, missed a precious milestone of reaching 100 appearances for Spurs, even after making a Sh1.45 billion move from Southampton.

Recently, the Harambee Stars Skipper donated 200 sanitizing kits to aid in combatting Covid-19. The donation which went to Mathare slum in Nairobi is expected to help the slum dwellers who are at great risk of contracting coronavirus.

Some of his recent memorable days in the London side was when his team reached the UEFA Champions League finals after a scintillating 3-2 semifinal comeback at Ajax. Although they lost the 2019 final to Liverpool, the memory of that fete will forever be etched in his mind and that of his fans.

Fans will also remember, with nostalgia, the moments he tore and dismantled midfield running the opponents amok.
His long-range blockbuster away at Liverpool became too hot for the goalkeeper to touch. It was and is still a hot topic in town whenever one sees the macho man.

Wanyama is now more determined than ever, to silence his critics and also enchant his supporters. For him, it is a new page and a chance to write another inspiring story.

Prior to the suspension of football, Wanyama had made his debut in the Concacaf Champions League quarters first leg face-off with Olimpia.

Elsewhere, some leagues are in top gear in preparation for the return of football. Soccer players in the English Premier League are already sharpening their arsenals in training as they spoil for the title fight.

The return of EPL which has now been slated for June 17th is expected to see Liverpool being crowned champions, while the relegation tussle will continue.

Just like the German Bundesliga is on, MLS is also keen on the return, to finish the season to avoid further losses in revenues