People fight for many things. Some fight over major things like a piece of land or for love, while others fight over a football match.

Each fight however small it may seem to one person means a lot to the other.

In the national arena, a major fight, depending on how one looks at it, is in the offing and centres on the tea in your cup.

The genesis of the conflict can be traced back to January last year when Peter Munya was appointed the Agriculture Cabinet Secretary.

Top on the former Meru governor’s to-do list was reforming the various sub-sectors, including tea.

Munya’s push has, however, rubbed some people the wrong way, sparking an all-out war between the ministry and players in the industries.

Things came to a head when the CS sidestepped KTDA and took charge of the election of directors of tea factories.

He said the ministry was implementing the directives issued by President Uhuru Kenyatta earlier, which required the Tea Board of Kenya to help the factories hold elections.

“Key among the directives is that the newly-established Tea Board of Kenya should jointly with other stakeholders and in compliance with all applicable procedural requirements, sanction immediate elections in all tea factories to enable farmers to freely elect their board members within 60 days from the date of the executive order, with the objective of securing transparently managed tea sub-sector,” said Munya.

However, the law firm representing KTDA-managed factories contested both the ministry’s move to hold the elections and Uhuru’s directive.

The lawyers said the High Court in Mombasa had granted an order to stop the elections after the East African Tea Trade Association filed a petition.

This saw the Constitutional Court issue a suspension order that is to be in force until the court hands its final verdict is to give room to KTDA and the National Government enough time to legally battle on who should take control of the sector that has 620,000 registered small-scale tea growers.

The constitutional court sitting in Nairobi ruled that the Executive Order issued by President Uhuru Kenyatta on March 12 touched on issues that had been raised in another case that was filed by Attorney General Kihara Kariuki. The case sought to stop the agency from holding elections last year. 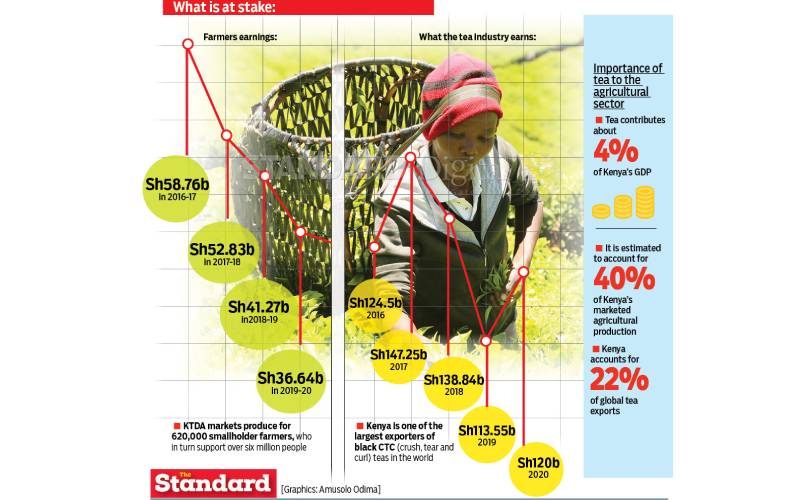 In case there are delays due to unforeseen circumstances, an Annual General Meeting (AGM) should be held at most 15 months after the last one.

Munya said according to the petitions, more than 15 months had elapsed from the last time the factories held AGMs and no new directors had been elected to replace those who had retired through rotation.

This had left the boards without a quorum to conduct business.

Understandably, the amount of money the tea sector generates is huge, with the beverage among the top foreign exchange earners for the country. In 2019, tea exports earned the country Sh117 billion and Sh22 billion in local sales. Farmers produced 458 million kilogrammes of black tea, which accounted for 7.6 per cent of global tea production

Green leaf contributes about 23 per cent of the country’s total foreign exchange, but the country’s farmers have always ended up with the short end of the stick.

In April last year, CS Munya revealed the government’s plan to intervene in a sector that has largely been under the control of private companies.

The CS took the war to the doorstep of the Kenya Tea Development Agency (KTDA) and its subsidiaries.

KTDA is owned by 54 tea companies with more than 600,000 smallholder tea farmers as individual shareholders. The tea companies collectively own 66 tea processing factories.

Experts said the ensuing legal battle between factory directors and the ministry will only serve to further hurt farmers. “If KTDA was serious about reforms, they would have studied the contents of the two task forces that were formed in 2007 and 2016 to investigate issues affecting the sector,” said Timothy Njagi, a development economist and research fellow at Tegemeo Institute.

“The intention of the government, I believe, is not to take control of KTDA. History has taught them better. KTDA should look inward and address its governance issues. The problem of fighting the government in court is that the smallholder farmer will continue to suffer and livelihoods will be affected tremendously; this war in the corridors of justice will hurt the sector.”

Regional forces and militiamen from neighbouring Amhara are taking advantage of the conflict to try and settle a decades-old land dispute.

There is tight security in the home; several roadblocks manned by police officers blocking locals from accessing the home as the funeral continues