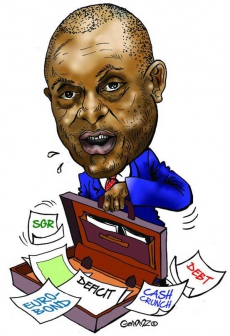 NAIROBI, KENYA: The Cabinet Secretary (CS) for National Treasury Henry Rotich is lurching from one financial challenge to another as the loan that the Government sought two years ago in the most difficult times fell due, but now without enough money to repay it.

CS Rotich who recently revealed that the country would be issuing another Eurobond to repay a syndicated loan of $750 million (Sh77 billion) that was expected to mature in October, was at pains to assure Kenyans that the country did not have liquidity issues.

Mr Rotich was confident that an austerity measure in place and ongoing Kenya Revenue Authority reforms was enough to put the surging budget deficit on checks. The reforms, he says, would reduce reliance on debts.

However, taking a bigger loan to repay an earlier one is evidence that Kenya might be teetering towards a debt crisis.

Suppliers to county governments are also withholding deliveries over outstanding invoices, in a major indicator that the State could be broke. In Bungoma County, for instance, supply for consumables such as newspapers have been cut.

As Kenyans concentrated on the intricacies of the repeat elections, Treasury mandarins had a headache of their own.

While the repayment period for the syndicated loan fell due, the Kenya Revenue Authority (KRA) was short Sh40 billion on revenue target due to massive subsidies on sugar, wheat, maize and milk that saw customs revenue plummet.

The National Treasury was also in hibernation mode - too afraid of the political implications of settling the debt.

The market, which has been getting a raw deal since the government capped interest rates, forcing risk free debt to remain muted at less than 10 per cent on Treasury bill, was also watching, hoping the State would dip into foreign exchange reserves.

But the loan which was maturing at the end of October had to be paid. Treasury went to the creditors to seek a debt roll over to have it repaid in another two years at the same terms.

However much to the Kenyans surprise, 10 per cent, who cumulatively held Sh7.7 billion flatly refused to roll it over. “We cannot reveal those who give us money so the jurisdiction or the countries that wanted an early settlement, I cannot give the details,” said Rotich.

“Those who wanted money upfront we paid them. The rest agreed on the six month extension. So by April, we will either get a syndicated loan or go back to the Eurobond market depending on our maturing obligations,” he added.

This, however, tells of how the market has turned against the Kenyan story that saw the $2 billion (Sh200 billion) Eurobond oversubscribed, as well as an $800 million (Sh80 billion)….tap sale attract investors.

The country has also delayed crude oil export, which means it will not get the huge windfall of dollars from the export of the black gold soon that it needed to comfortably settle the dollar debts it has been raking up.

Kenya’s exports have been shrinking even as it needs more dollars to foot the import bill, let alone paying debt which it has to settle before paying its workers’ salaries and development.

This put the current account deficit at 7.7 per cent of GDP in February from 5.9 per cent a year earlier.

The country’s export values to February fell by 5.6 per cent (mainly coffee, horticulture, oil products, manufactured goods, chemicals and related products) while the value of imports increased by 3.3 per cent reflecting increase in payments for oil imports on account of the rebound in global oil prices.

While reprieve has been coming from Kenyans living abroad and civil societies, the political backlash on NGO’s meant Kenya receiving fewer dollars.

Treasury has noted a slowdown in money from global charities in a recent update.

“Inflows (secondary income) decreased by 6.1 per cent in February 2017 mainly on account of lower income receipts from NGO’s despite an increase in remittance inflows under personal transfers,” the National Treasury stated.

Short on dollars, Kenya’s story has also been dented by budget spendings beyond the country’s means.

The shortfall between the budget and what is collected by the KRA has been growing at such huge levels which make it impossible for the State to do without new debt.

The State insists that it will maintain the gap between what it can raise from taxes and the expected budget at Sh535 billion to achieve a budget deficit of 6.4 per cent of GDP, down from 8.5 per cent in the last financial year.

However, according to the latest Treasury projections, the fiscal gap is expected to be bigger at Sh691 billion which would put it at 7.9 per cent of the GDP.

The government story has been that spending on infrastructure will spur the economy and thus generate more tax revenue to finance the debt.

However the projects which are capital intensive will not be able to translate into higher revenues in the short-term, and will not be fast enough to pay the debts. Borrowing for infrastructure is a risky play.

It only works if there is an obvious use during the life of the borrowing, and there is broader economic cushion around to refinance the loan even if the infrastructure is delayed.

Smaller players have to understand that taking huge projects means a strain on their cash flow despite the project being a lucrative, and make the right moves to keep that finance flowing.

“Debt-financed infrastructure has to either pay-off really fast, or unlock indirect economic activity of such a scale that a delayed payoff is not a concern. Treasury and CBK need to start crafting the right explanation fast to roll-over the bonds and loans taken in the name of infrastructure” said Mr Deepak Dave of Riverside Capital. The government is now in a fix hoping to increase taxes by reforms of the tax laws and cutting down spending.

Treasury says it will roll out a modern Income Tax Act, start implementing a new customs management system and phasing out the Simba system that has been losing money.

The taxman will also seek to make better tax valuations and improve shipment inspection while at the same time mine third party data which will be linked to bank accounts, Integrated FinancialManagement Information System and the Central Bank.

The biggest problem is that the economy has slowed down, most firms are laying off and issuing profit warnings in the last two years - meaning that the administrative actions may not yield the desired results. It is estimated that cutting down spending for Kenya will mean lower growth because the current growth has mainly been driven by government spending and not private sector expansion.

Kenya which is now relying on borrowing funds to pay debt is also facing a double whammy since the cheap money that has been floating in the financial market is finally drying up.

“I do not see a problem when I can borrow at one per cent to pay off an eight per cent loan. The problem with this country is that we think borrowing is criminal.

Kenya has never defaulted on its debts. Look at countries that were forgiven debt like Uganda and Tanzania. They have actually borrowed more than us, and they are at the same level as us even though we did not benefit from the debt right off,” explained CS Rotich.

This may however be a pipe dream, after a decade of cheap money in the international market, creditors are turning off the tap. Last week, the Bank of England joined America in hiking interest rates from 0.25 per cent to 0.5 per cent for the first time since 2007.

This follows the trend by the US which has raised rates three times in the recent past, leaving only the European Central Bank and Japan Central Bank with near zero and negative rates respectively.

The US Federal Reserve has also eased on investing in debt securities to inject money into the economy to support sectors that were reeling in turmoil after the financial crisis.

This, however, would mean that African countries who have been beneficiaries of the cheap money by issuing Euro-bonds will find it hard to raise fresh capital, according to Deepak.