'I too was an envied flower girl'

As Barack Obama descended the steps of the Air Force One on Friday evening and stepped on Kenyan soil for the first time as President of the United States, a little girl waited on the sidelines, her instructions probably memorised. At the right moment, perhaps prompted by her chaperon, she stepped forward and presented a bouquet of flowers to "the most powerful man on earth" and made history as the first person to welcome him to Kenya.

As Obama scooped the bouquet in his hands, he bent down to eight-year-old Joan Wamaitha's level and made eye contact with her while whispering something to her. Then he took her in his arms and gave her a warm hug.

A camera, among dozens of others, captured the moment and the single picture was soon the most circulated among Kenyans on social media.

The comments flowed with many expressing the opinion that the girl was "lucky" and "blessed". Kenyans wanted to know who she was and where she had come from. Some speculated that she was Auma Obama's daughter and most proclaimed that she would have a bright future ahead of her, thanks to her new-found fame.

Then a news story broke revealing her identity. She was a resident of Mama Ngina Children's Home in Nairobi's South C area and she was a Standard One pupil at Mariakani Primary School.

Meanwhile in Ruiru, almost 20 kilometres from where Obama's plane touched down, Susan Wangari, 30, sat watching the unfolding events on television with her six-year-old daughter. There was no TV in her one-roomed house next door so her neighbours were kind enough to let her join them.

As an eight-year-old girl in 1990, she was almost precisely in little Joan's shoes. She had welcomed a visiting dignitary in the same fashion - Nelson Mandela to be exact - and although she has few memories of the day, she is sure of one thing; that it was one of the biggest days of her life.

"I had given bouquets to other visitors before, including Retired President Daniel arap Moi, but I somehow knew this was different. The rehearsal was more elaborate and there was more excitement in the air. I wasn't sure who was coming but I knew it was someone international," Susan says.

Susan was then a resident of Thomas Bernados Children's Home in Lang'ata, Nairobi. She had been living there since she was 7 months old when her mother had been admitted to Mathare Hospital to be treated for mental illness.

"I have a father and other siblings but when they [social workers] visited my home, they found that the environment was not conducive for me because of my age. My father worked far from our home and my siblings were too young to take care of me," Susan narrates from pieces of information she has gathered over the years.

"I lived at the home all my life but the home made it possible for me to keep in touch with my family. It was fun growing up at the home with other children. We were social with each other and we grew up loving each other," she says.
Susan doesn't quite recall how she came to be chosen as the "flower girl" or "a friend of the president" as one magazine from the eighties put it. She remembers that for many years, from when she was in "pre-unit" up to the time she was in Standard 3, someone, probably a government official, would pick her up from the home every so often and take her to a tailor where her measurements would be taken. She would then begin rehearsals for the upcoming role, which she had become quite conversant with.

"They would coach me on balance and how to walk. They showed me how to curtsey and to say something like, 'Karibu Kenya'," Susan recalls. "They gave me a tray so I could practice walking with it."

"Soon, I got used to it and I wasn't very nervous any more. My teachers used to tell me that I represented the school and the home so I did it with all my heart," Susan says.

However, Susan confesses that success didn't always come easy, "The first time, I was so nervous that I peed in my pants. There were lots of cameras and media people poking in around me wanting to know who I was. It was quite a crisis because the visitor had already landed," Susan says laughing but adding that she can't quite remember how it all ended.

Susan says that looking back, she is grateful for the opportunity. "It helped me a lot with my self-esteem. I can tell from my school reports. I was good at poetry, good in music," she says. "I was a pupil at Lang'ata Primary School and the teachers were so proud of me. They said it brought the school glory. I guess my fellow pupils were happy about it as well because I always brought them cake!"

Nearly 25 years later, Susan says that despite the opportunity and the care and compassion she got from the children's home, she wishes her life had turned out better.

"After I left Thomas Bernados, I got a job in the transport industry with a line of buses called Msafiri but the business went under. I got jobs with two other transport companies but somewhere in the middle, I got pregnant and it was all downhill from there," she confesses. "I tried going into business...selling tomatoes and honey...but the businesses failed. Now I've run out of money," she says.

Susan is however not bitter about her situation. "When I tell my neighbours that I was once like Joan, giving flowers to dignitaries, they have a hard time believing me. All I wanted was to tell someone my story so I would not be forgotten. The Retired President Moi knew me by name. I wish I could meet him now," she says.

"When people look at Joan, they think that fortune will come to her automatically. They believe that by virtue of her role, her fate will change and opportunities will open up for her...that she will get a chance to become something big...that she will get sponsorship...," Susan says.

"But that's not necessarily the case unless someone takes the first step. A day will come when she's grown up and she has to leave the home and be on her own. I hope someone will be there for her for moral and financial support," Susan says.

A batch of Kenyan newborn babies have been named in honour of US President Barack Obama's visit to the country -- with some mothers evidently hoping their offspring will be future high-flyers.

By Nzau Musau | 6 years ago

Tom Mboya, the forgotten visionary in the Barack Obama story

By Dann Okoth | 6 years ago 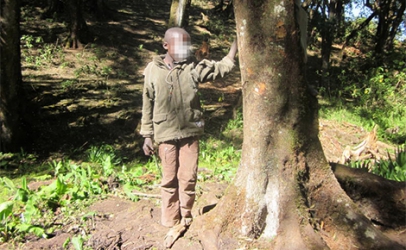 By Fred Kibor | 6 years ago