Nails and metal in your Livestock? Here is how to prevent

Thanks for your weekly very educative articles on livestock health. I am a dairy farmer here in Kabarnet, Baringo County. I lost a very good Friesian cross to hardware disease as diagnosed by my veterinary doctor. I later realised the free ranging I practice and some construction work that was ongoing on my farm might have been the cause for this disease. Why is this disease common and how can it be prevented?

Thanks, so much Benard for the good question. You are right in your observation that Hardware disease is increasingly becoming common, this has been attributed to increased mechanisation of farming (research has reported that 55 to 75 per cent of cattle slaughtered in eastern United States have been found with a hardware disease) and also due to poor animal husbandry. Benard case is a good example, cattle will easily swallow nails and wires whenever they are present in pastures. He kept the cattle in an area where construction was ongoing exposing the animal to metallic objects. Although many farmers would wish to attribute it to malice by jealous neighbours- I will not comment on this though.

What is Hardware Disease?

Hardware disease also known as traumatic reticuloperitonitis is caused by sharp objects that are ingested by livestock in the process of feeding. These sharp objects once lodged in the stomach (reticulum) may pierce the wall through diaphragm to the heart and cause death. The ingestion and lodgment of foreign bodies in reticulum is common in cattle due to indiscriminate feeding habits. The disease is a very painful to the animal and causes wasting.  The anatomical structure of the reticulum makes it a trap of heavy objects ingested by the animal.

Hardware disease may be present and yet produce no damage to digestive and cardiac structures; but their presence is a risk factor altogether. However compounding factors like pregnancy that displaces the rumen and reticulum forward can turn an otherwise harmless metallic object into a fatal object. Other things that cause damage from a swallowed object include contractions, forceful abdominal movements like when a cow moves up or down a steep slope. Hardware disease is common in older cattle than in younger ones.

What are the Clinical Signs?

Poor appetite, depression, slow movement or reluctancy to move, pain at defecation, on auscultation abnormal heart sounds will be heard. Slaughter is always recommended, because by the time it is diagnosed already damage has advanced. For high value or animals used in breeding surgical (rumenotomy) treatment maybe attempted despite a poor prognosis that depends the extend of disease, for how long the disease has been present, age of the animal.

How to prevent hardware disease?

Good husbandry practices like careful storage of metallic objects, replacement of baling wires with baling threads, keeping cattle away from construction sites and use of magnets attached to feed cutting machines are ways of preventing hardware disease.

The Magnet as a preventive measure?

The use of a bolus magnet inserted in the reticulum is an effective prevention technique for hardware disease. The magnet is administered by a veterinary doctor much like a large bolus or pill, with a stomach tube or balling gun.

This magnet has grooves that will pick all metallic objects in the reticulum and subsequently hold onto them significantly reducing chances of them causing penetration. Oral administration of the magnet should be done after one year to 18 months age.

After oral administration, the magnet will first drop into the rumen then move to the desired location in the reticulum following ruminal and reticular contractions.  It is recommended to add another magnet after four years for effective prevention of hardware disease.

(Dr. Othieno is a veterinary surgeon and currently the head of communications at the Food and Agriculture Organization of the United Nations (FAO) Kenya. The views expressed here are not necessarily those of FAO but his own) 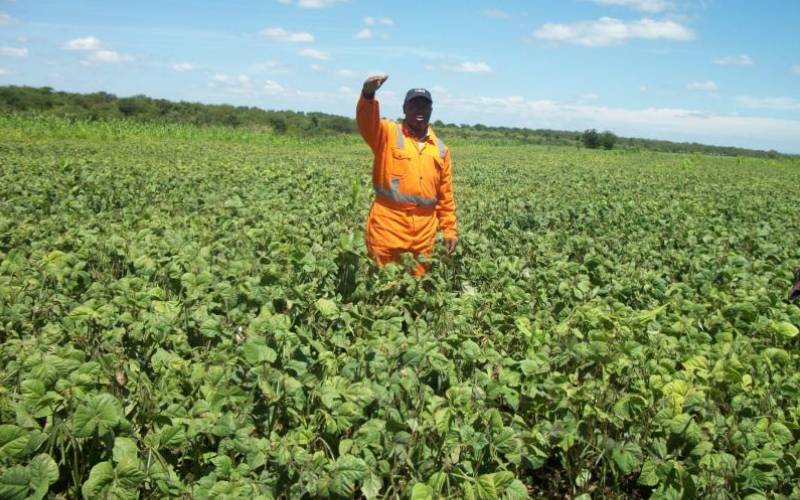 Ndengu farmers see hope in getting cash crop status
Many farmers say they stopped planting the crop because of poor prices and lack of ready market for their produce.
Smart Harvest
By Philip Muasya
3 months ago

Media and its role in food security and climate action
Events
By Njoki Thuo
2 days ago
Everything you need to know about growing green grams
Crop
By Kelvin Ogega
2 days ago
Honey bees feeling cozy in concrete beehives
Livestock
By Kelvin Ogega
5 days ago
Cassava value added products
Crop
By Jennifer Anyango
5 days ago
Farmers trained on disease and tsetse fly control
News
By Isaiah Gwengi
6 days ago
.