For more milk yields, I talk to my dairy cows

“If you want to lead a happy retirement life, venture into farming. It is not only lucrative but also satisfying,” says Joseph Kimetto, a retired teacher.

Kimetto was the first Principal of Moi High School Kabarak years back and has settled into the peaceful and quiet life in farming in Lenginet, Nakuru County and Kericho.

Kimetto was principal in Kabarak between 1979 and 1986 before transferring to Kenya Railways as Director and later worked with the Pyrethrum Processing Company of Kenya.

He ventured into serious dairy-farming in 2016 after he left Pyrethrum Processing Company of Kenya.

At his farm, he has more than 30 Friesian cows. He has a special bond with each and has a name for them.

During the interview, Kimetto calls ‘Sandra’ and one of the cows stops grazing and turns to the direction the voice is coming from.

The cow concentrates and Kimetto engages it in a talk. The cows seem to understand what Kimetto is saying.

Though there is no response, Kimetto is satisfied with the fact the cow is calm and keeps moving its tail as he speaks.

At some point, Kimetto holds the cow by its neck and asks the cow whether it knows the visitors.

“I talk to my cows like I do to human beings and I call them by their names. That was we have formed a bond,” Kimetto says.

According to Kimetto, when he connects to his cows through language, it makes them calm and they produce more milk.

Scientists have been researching how cows communicate and have agreed that cows use individualised calls to communicate with each other.

Kimetto milks 28 of his cows and gets 300 litres of milk per day.

Despite the harsh economic times, he sells his milk at Sh50 a litre. Though most dairy farmers are facing difficult times due to low milk prices, Kimetto has identified his market among his people and nearby centres.

He adds that he earns extra cash by selling heifers.

Feeds is a challenge most farmers face and to counter that, Kimetto has planted hay on 40 acres and also plants yellow maize.

He harvests more than 8,000 bales of hay which when mixed with the yellow maize and cotton seed cake is given to the cattle.

Kimetto says he grinds the whole maize plant before mixing with the hay.

To ensure that the cattle add weight and stay healthy and strong, they are not allowed to leave his compound. He discourages the animals roaming freely because it makes them prone to diseases.

His cows have been victims of foot and mouth disease which they contracted when they used to drink from a nearby river.

“To avoid such instances, I advise farmers to try get water for their animals in their own farms so that they do not get diseases,” he says.

Rono says when an animal is infected with the virus, the first signs of illness appear within two to 14 days.

Some of the common signs of diseases are fever, weight loss and loss of appetite, quivering lips and frothing of mouth. The animals may also develop blisters on teats, dental pad and on the tongue.

There is no treatment of foot and mouth disease, however measures can be taken early during an outbreak.

“It is the responsibility of the government to provide a quarantine whenever there is an outbreak.

Farmers also need to report suspected cases of the disease because it spreads first,” Rono says.

To stay safe, Rono advises farmers to present their animals during vaccination campaigns.

Ultimately, to keep their animals free of diseases, farmers ought to adopt strict bio-security measures.

In line with that, Kimetto says the health of his animals is paramount and he has to be keen.

To keep diseases at bay, he also keeps a record of the animal’s health and monitors their production.

For diversification, Kimetto also grows mangoes on 0.7 acre parcel of land and his plan is to expand it to two acres.

At his Kericho home, he grows avocados.

He learnt of avocado farming through a story in the media that highlighted a farmer with avocados on two acres, from which he earns millions of shillings.

“I only have an acre and intend to do more, we have also registered a society in Kericho which comes and collect avocados from farmers,” he says.

His three children now living in the United States were educated using proceeds of his cows. Farming is rewarding that is why he encourages the youth instead of sitting idle, to venture into it. 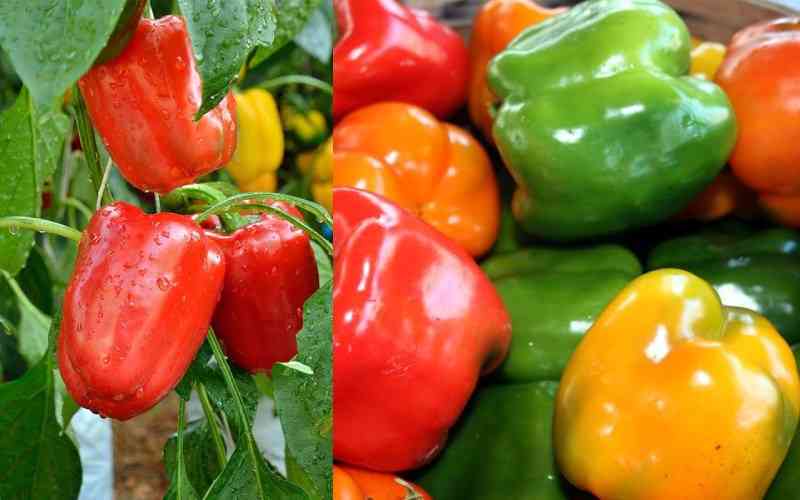 Pest control strategy on sweet pepper farm
Pepper is grown on large scale in many parts of the country because of its high market value.
Crop
By Anne Atieno
Oct. 13, 2022

How technology can boost dairy farming Smart agriculture
The technology comes at a cost but it has handsome returns on investment.
Technology
By Anne Atieno
Jan. 27, 2023
.