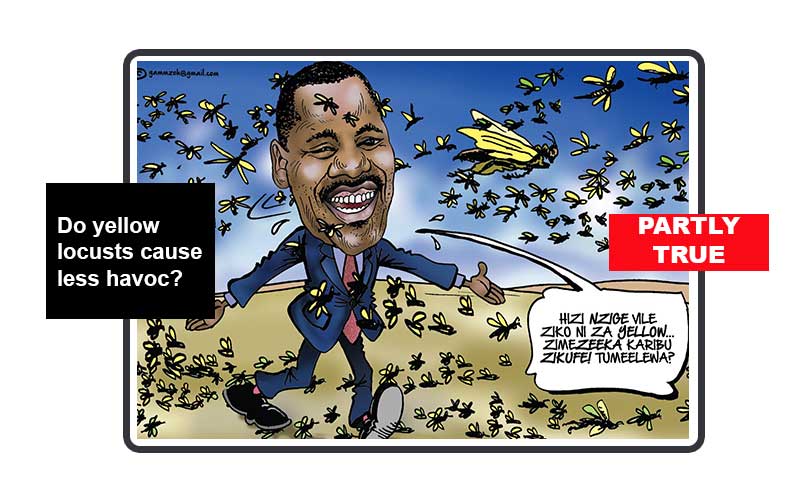 Agriculture Cabinet Secretary Peter Munya on Monday, February 17, claimed most of the locusts ravaging crops and grazing land in Kenya are destined to die of old age and are no threat to the country’s fragile food security.

Mr Munya held that the swarms mostly comprised harmless yellow locusts that would soon die, including due to cold weather.

"Don’t be worried. They are going to die," he said at Gakurune Primary School in Meru, "They are yellow in colour. It means they are old locusts. They cannot harm crops. Their main concern now is looking for a place to lay their eggs.”

The claim set off national debate, including in the Senate, where the minister was accused of trivialising Kenya’s worst locust invasion in 70 years.

A Senate Committee yesterday summoned Munya to explain his ministry’s plan to manage the swarms of locust and prevent them from spreading.

The Standard Digital Fact Check Desk moved in to ascertain if Munya’s claims on the yellow locusts were true.

Categorised by the United Nation’s Food and Agriculture Organisation (FAO) as the most dangerous migratory pest in the world, desert locusts are a species of short-horned grasshoppers.

Unlike many grasshoppers, however, they have the ability to migrate over long distances and also change habits and behaviour.

FAO notes that desert locusts have ‘quiet’ periods also known as recessions, when they can be found in Africa’s arid and semi-arid deserts. However, when there’s a plague, they travel out of their habitat in search of food.

Plagues are defined as periods of one or more years of widespread infestations as a result of good breeding conditions.

As such, the desert locusts have invaded 18 counties in Kenya in their billions. Across Kenya’s borders, they have spread to Uganda, Tanzania, Sudan, South Sudan, Ethiopia and Somalia, which is already reeling from widespread hunger from extreme weather patterns.

FAO warns that if this is uncontrolled, the fast-breeding insects could grow 500 times by June.

They can travel up to 150km in a day and eat their own body weight in greenery, meaning a swarm just one kilometre square can eat as much food as 35,000 people in a day.

Scientists say a locust’s lifespan is about three to five months. It begins with eggs hatching after two weeks (range is between 10 and 65 days), and hoppers fledging and becoming adults after six weeks. Thereafter it takes about a month for them to mature and be ready to lay eggs.

This cycle can be divided into three stages: the egg, the nymph known as a hopper, and the winged adult.

When the environment is favourable, often after heavy rains and cyclones, the locusts come together in the same place – they change their colour to pink (immature) and then yellow (mature) and form swarms, a process known as gregarisation.

This is unlike other grasshoppers, which are largely solitarious (act as individuals).

In Kenya, the locusts breed between January and March.

FAO notes that the race is to contain the locusts before they turn yellow since a new generation often multiplies 20-fold.

It adds that the locusts that arrived in Kenya are immature and maturing swarms, and the goal is to prevent a new generation before the planting season as it could threaten food security.

“We have put in a six-month control action plan as we expect to continue seeing them until June this year,” it says, adding, “Our current concern is the second generation of locusts. Because by the time they hatch, they will be 20-fold the initial number of locusts, and it is anticipated that it will coincide with the initial phases of the planting season. The hoppers are voracious feeders, and we are concerned that they might wipe out the germinated crops.”

We unsuccessfully tried to contact CS Munya to ascertain if this is what he meant when he said Kenyans didn’t have to worry about the old locusts.

Do not ignore the adults

The transformation in the locusts’ bodies also comes with extra muscle mass, thus requiring them to load up on carbohydrates, especially as they are changing into their gregarious phenotype.The black and yellow locusts are attracted to the odour of hyoscyamine, a toxic alkaloid found in plants.

They are, however, not as dangerous as the hoppers (instar stage one and two upon hatching), which FAO describes as “voracious feeders”.

“Once the locusts become yellow, these are adults who are ready to copulate. After the female has laid eggs on the moist ground, they die,” the UN food agency adds.

This confirms part of the statement that CS Munya said on Monday.

The Standard Fact Check Desk has labelled the claim by CS Munya PARTLY TRUE as he was right on yellow locusts naturally dying and being less ferocious than the other growing locusts.

He, however, needed to contextualise his statement and give more clarification and evidence to support the claim. The yellow locusts could wreak more damage if allowed to breed a new generation.