Explainer: Why is coronavirus now a pandemic and what happens next?

After two and a half months since the outbreak began, the World Health Organization Wednesday declared novel coronavirus a pandemic.

This is the highest level classification to describe a disease outbreak under the International Health Regulations.

WHO Director-General Tedros Adhanom Ghebreyesus said COVID-19 (the official name for the virus) had gained a foothold on every continent except for Antarctica.

“In the past two weeks, the number of cases of COVID-19 outside China has increased 13-fold, and the number of affected countries has tripled. There are now more than 118,000 cases in 114 countries, and 4,291 people have lost their lives,” he told a press briefing.

He said that the agency was “deeply concerned” by the worrying levels of spread and severity and the “alarming levels of inaction”.

But what does a pandemic, the worst-case scenario for infectious diseases, mean?

Pandemic originated from Greek words pan "all" and demos "people" and is used by medics to describe infections that are essentially spreading in multiple countries.

The World Health Organization defines a pandemic as “an outbreak of a new pathogen that spreads easily from person to person across the globe.”

A disease is more likely to be declared a pandemic if the virus is brand new, able to infect people easily and spreads from one person to another in an efficient and sustained way.

To meet the classification, a disease must be contagious. This means diseases such as cancer, which are globally widespread but not infectious, cannot be labelled as a pandemic.

The last time a pandemic occurred was in 2009 with swine flu (H1N1), which killed hundreds of thousands of people globally.

According to the USA’s Centres for Disease Control and Prevention (CDC), there have been at least four pandemics of influenza in the 19th century and three occurred in the 20th century. Others include HIV/AIDS and Zika Virus.

There has been no pandemic sparked by a coronavirus before COVID-19. [There are several coronaviruses three recent examples being 2019-nCoV, SARS-CoV and MERS-CoV] 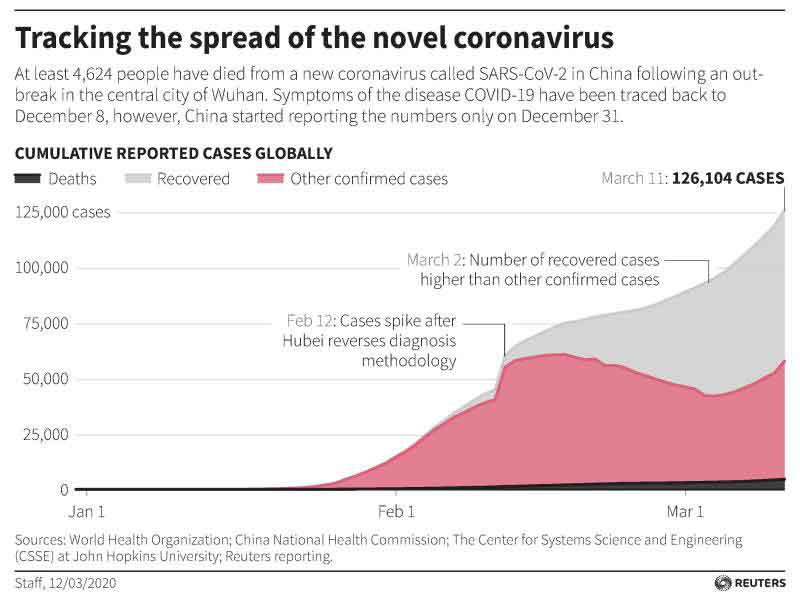 How did we get to a pandemic?

COVID-19 began as an outbreak late last year in Wuhan, China. This is when a small number of cases are reported in one area.

WHO says: “A disease outbreak is the occurrence of disease cases in excess of normal expectancy. The number of cases varies according to the disease-causing agent, and the size and type of previous and existing exposure to the agent”.

When the disease crossed borders in January, it was declared a public health emergency of international concern.

This according to the WHO, meant it was “an extraordinary event” that constituted a “public health risk to other States through the international spread of disease” and potentially required a coordinated international response.

Some of the previous public health emergency of international concern include Ebola, Zika and H1N1.

The disease becomes an epidemic when the cases are reported “in excess of normal expectancy”.

Also, in the Dictionary of Epidemiology, an epidemic is defined as “the occurrence in a community or region of cases of an illness, specific health-related behaviour, or other health-related events clearly in excess of normal expectancy”.

Loosely, an epidemic is a sudden increase in cases of an illness or disease that can be unique to one country or community.

If the spread is simultaneous and sustained across international borders, it grows into a pandemic. There is no threshold, such as a certain number of deaths or infections or number of countries affected to be met for WHO to declare a disease a pandemic.

Is the disease more dangerous now that it is a pandemic?

Pandemics do not translate into an increase in the potency or deadliness of a disease. The concern lies with its spread.

A wider spread effectively does increase the likelihood of fatalities, but the status does not guarantee a death sentence.

WHO Wednesday said classifying COVID-19 as a pandemic did not change its assessment of the threat posed by the virus.

It said pandemic was a word not to be used lightly or carelessly. According to the agency, if misused, it could “cause unreasonable fear or unjustified acceptance that the fight is over, leading to unnecessary suffering and death”.

That notwithstanding, WHO notes, it has not seen a pandemic that can be controlled at the same time.

WHO says it is not changing its advice on what countries should do.

Director-General Tedros Adhanom Ghebreyesus yesterday said all countries could still change the course of the pandemic.

“If countries detect, test, treat, isolate, trace, and mobilize their people in the response, those with a handful of cases can prevent those cases becoming clusters, and those clusters becoming community transmission,” he said.

He added that the challenge for many countries who were dealing with large transmission was not whether they can supress and control the epidemic but it was whether they would.

He went on that the WHO was asking all countries to:

By Vivian Wandera | 17 days ago

Why Jomo Kenyatta International Stadium has no walls
Feedback