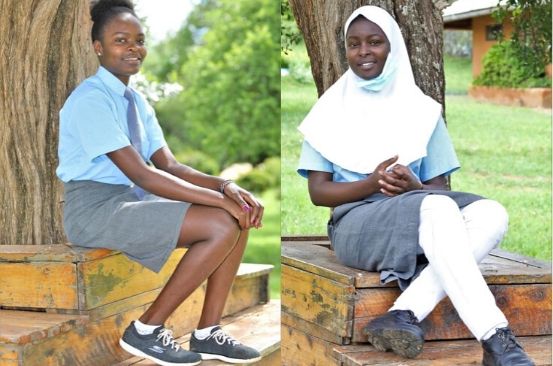 Nearly three months since the government shut down all learning institutions to curb the spread of coronavirus, Asha Siti and Sharon Ravin are still stuck in an empty school.

They do not have a home to go to.

When her classmates were done packing their books and personal items to go home as per the government’s orders, Siti hugged them goodbye and retreated back to the empty school.

The Form Three student at Daraja Academy in Segera, Laikipia County, has known the school as her home since April last year.

Since childhood, Siti’s family of five has never had a home of their own. Her mother has been ill for as long as she can remember and for years, the family roamed the dusty streets of Marsabit in search of food and shelter.

“I grew up in the streets of Marsabit town. My mother has never been herself since I was a little girl,” says Siti.

Siti would still be roaming the streets on Marsabit if a good Samaritan had not rescued her.

She is not alone. Ravin, a Form Four student at the academy also has no home to go back to in the ongoing school lockdown.

Although this is not the first time the two have found themselves alone in school, this is the longest break they have had to endure alone.

Staying inside the empty school is taking a toll on the duo, and Siti says she cannot help but worry about her mother, and friends.

“I didn’t know it would be this long... from the look of things, reopening may not happen soon. It feels lonely, but where do I go? Sometimes I walk around the empty classes and dormitories to feel the presence of my friends. I miss them everyday,” she says.

Siti and Ravin spend much of their time roaming inside the deserted compound, hoping and praying that the government reopens schools sooner. They cannot wait to welcome their schoolmates back, and have a semblance of a family.

But how did they just end up stuck in school when their friends are at home?

Siti, 17, and Ravin, 18, were brought together by an unfortunate twist of fate. The two are not related, but the story of how they ended up in Daraja Academy for girls on the run is eerily similar.

Siti was taken in under a full scholarship in 2018 after her story convinced the school’s management that she indeed needed help.

Three years later, the school is the only place she can call home.

“My mother would take us with her, knocking on door after door for food. We were exposed to all manner of dangers on the streets and, being so young, I could not understand how she watched it all and she could not do anything,” she recalled.

Her escape from the streets was anything but smooth. Siti had also narrowly escaped getting defiled several times.

“I was taken in by a family when I was in Class Four in a school in Marsabit, but I was supposed to be a part time house-help. My mornings before school and evenings were about washing my hosts’ clothes and doing domestic chores,” she recounts.

Her teachers knew about her plight, and one of them introduced her to Daraja Academy. The school became her new home. Her mother did not want to take her back after she secured a scholarship.

“I have made peace with my past. I feel safer at school than at home, but I am worried about other students whose cases are similar to mine or even worse. They had just joined the school a few weeks before the closure,” said Siti.

Her friend, Ravin was rescued from a street family somewhere in Dandora, next to Kenya’s largest dumpsite that is in Nairobi. She, too, cannot go home now for the same reasons as Siti’s. She has no home to go back to.

Back in Dandora, her mother also depends on well-wishers to survive, and Ravin’s siblings are scattered in different foster homes.

For this quiet and reserved teenage girl, Daraja Academy is home. She was recommended by a pastor from her area just before she ended up in Nairobi’s streets.

Amidst the loneliness inside the deserted school, Daraja Academy principal Victoria Gichuhi is the two girls’ mother figure. Until schools reopen, the empty classrooms and dormitories are one vast empty home.

It might be empty, but at least it is safe. “Our policy is that if home is not safe, Daraja Academy is home, and the girls know this,” says Ms Gichuhi.

She also keeps close tabs on those at home during this long break.

“If I learnt of a girl in a threatening situation at home, I would encourage her to come back to school,” says Gichuhi.

Being on full scholarship, Gichuhi said the two girls can remain in school for as long as they wish.

“If they have nowhere to go, we let them stay,” says Gichuhi.

On it is written: “Every year Daraja turns away more girls than it can admit. Until that changes, this seat will remain vacant.”

Man Republic: Why I hated mathematics in high school

Protecting your finances during the COVID-19 crisis

People should wear face masks during intimacy and avoid kissing