Readers Lounge - By The Saturday Standard

Women leaders under the Embrace Kenya caucus have called on Kenyans to foster national unity, peace and development.

The forum anchored by county representatives has been visiting counties with a message of peace and national cohesion to unite the over 45 million Kenyans. Donning their now characteristic white dresses with pink scarfs or flowers, the women said they would not tolerate violence from men.

They also spoke out about the verbal attack on Nairobi County MP Esther Passaris during the Madaraka Day celebrations by Governor Mike Sonko that ended with the woman rep staging a walk out and further verbal assault in subsequent days.

Ms Chege said the men should be warned that the women leaders would continue to be committed to compete on ideas and not physical strength.

“We shall not fight physically, we refuse to be beaten, and we are standing with these two women today. Walk with your heads held high, you shall not bring us down,” she said.

Ms Passaris said that women were 52 per cent of the Kenyan population and it was time to stand up and condemn femicide and gender-based violence.

“The President has implemented two-thirds gender rule in his Cabinet and yet the National Assembly has failed to pass the law. We must not give up in our quest for equal representation,” she said.

Mombasa Woman Representative Asha Hussein said women should be respected and had a crucial role to play in propagating peace and cohesion.

Kanu nominated Senator Abushiro Halake said the over Sh3 trillion budget unveiled by the Executive should ensure that the counties get adequate funding to uplift lives at the grassroots.

Nairobi County Assembly Speaker Beatrice Elachi supported the peace initiative started by President Uhuru Kenyatta and ODM leader Raila Odinga, saying Kenyans were free to do business in any part of the country. Kigumo MP Ruth Mwaniki said the government should ensure that funds allocated to the coffee sector benefit farmers. The MP said there was need for the government to address challenges faced by tea farmers. She said the farmers were disappointed with marketing of their produce following low payments.

“There is need for Ministry of Agriculture and Kenya Tea Development Agency to address the issue to ensure farmers get better payment,“ she said.

There was a brief moment of tension as Mwaniki concluded her speech and was asked by the crowd to pass greetings to Deputy President William Ruto.

She instead said her allegiance was to President Kenyatta and Chege moved in to clarify that President Kenyatta was in charge of the country, saying that those seeking to disrupt the meeting should keep off. Kirinyaga Governor Anne Waiguru said President Kenyatta was a darling of Mt Kenya region and must continue to be respected. “There is need for the community to understand that there are political kingpins who guide their people in the best way. President Kenyatta should be supported by those who would want to succeed him,” said the governor. 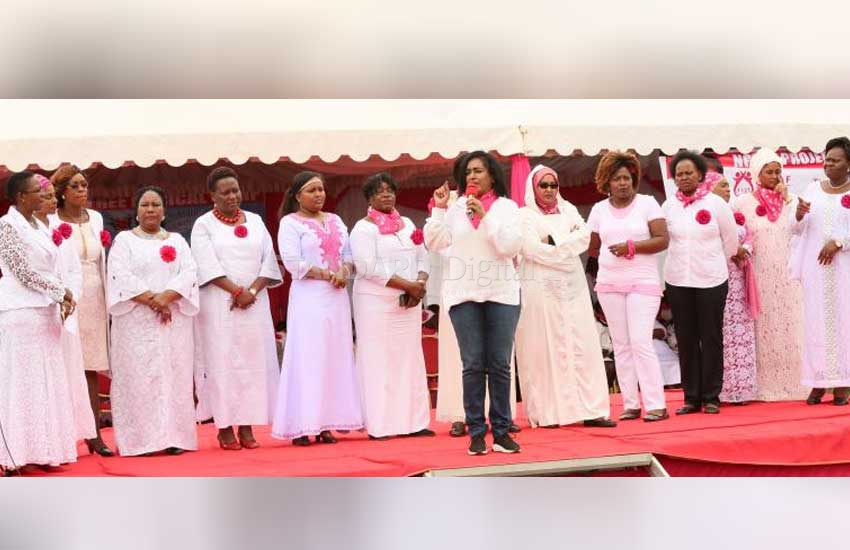 Former Nyeri Woman Representative Pricillah Nyokabi said there was need for all Kenyans to embrace peace for the country to prosper economically.

She said unity between the President and Opposition leader Raila Odinga has brought calm in the country, and this initiative must be supported.

“What has been experienced in the past and tore the country into pieces should not be entertained, ever again,” she said.

Professionals from Murang’a led by Nairobi Institute of Business Studies Director Liz Wanyoike and Nancy Gachoka said the locals should respect their leaders and avoid political incitement. Wanyoike said she has been involved in counseling the youth, seeking support from parents to save their children from engaging in drugs and other anti-social behaviours.

“As a professional counselor I have visited several schools educating the young on the need to respect leaders and avoid drugs,” she said.

The meeting saw distribution of cheques worth Sh11 million to local women groups.

Simple exercises to strengthen your knees
Fitness - By Nina Odongo