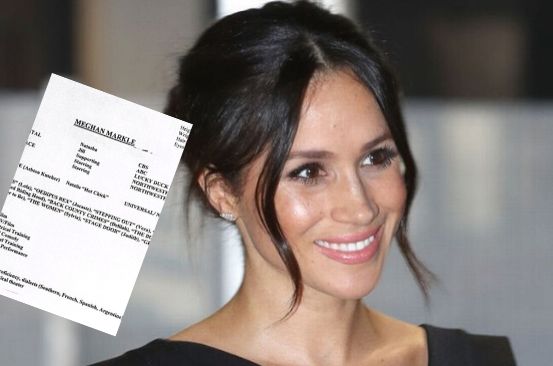 Meghan Markle is known as an accomplished Hollywood actress, a wife to Prince Harry and mother to Archie - but few will know the former royal is kickboxing and martial arts-trained.
The Duchess of Sussex's CV has resurfaced, revealing the former Suits star has plenty of other strings to her bow.
Not only does the now 38-year-old dance, she can also speak multiple languages.
Meghan's old CV gives a glimpse into her life as an up-and-coming young actress, before she got her big break with Suits and a glittering future with Harry, the Duke of Sussex, and baby Archie.
Aside from listing her basic credentials - the 5ft 6in brown-eyed budding actress - revealed her 'special skills.'

Those skills could come in handy for Meghan, who split from the Britain's royal family along with Prince Harry to start a new 'financially independent' life across the pond that could mean a revival of her acting career.

The couple had moved to Canada after dropping their royal split bombshell, but are currently holed up in Los Angeles in an £18million mansion to be closer to American-born Meghan's mum during the coronavirus pandemic.

Meghan, who is thought to have been around 24 at the time she was using the resume, writes that she has ballet, jazz and tap dancing skills, and experience in musical theatre.

Meghan also claims she is fluent in Spanish, and proficient in French.

The passionate fitness and yoga fan writes that she kickboxes too.

That skill was put to the test when she scored the role that propelled her to fame, on US legal drama Suits.

Her personal trainer for the show has previously revealed he put her through her paces - and that she speaks Spanish with an Argentine accent.

Jorge Blanco, who also worked with Chris Hemsworth and his wife Elsa Pataky, told Vanity Fair Spain he trained Meghan in kickboxing and martial arts as she filmed the show.
"I trained Meghan when she was in Toronto during the shooting of the series 'Suits'. We did a little bit of martial arts, a little boxing, and sometimes kickboxing.
"I never really thought she could end up being a princess! I had a great time training with her because she's super nice and speaks Spanish, with an Argentine accent."
Blanco even offered to train Harry and Meghan if they were ever back in Toronto.

Meghan's CV also lists roles she has played before she achieved household-name fame - including her small part as 'Hot Chick' in A Lot Like Love, which also starred Aston Kutcher.

There are also a number of theatre jobs listed, including the part of July/Star to Be in Annie and a role in Richard Harris's 1984 play Stepping Out.

The CV came with a stunning sepia-toned headshot capturing photogenic Meghan wearing a simple black halterneck, and what would become her trademark messy bun.

It remains yet to be seen what Meghan will do next, after the couple's initial forays into their new lives included speaking engagements for wealthy bankers, launching a new foundation, and Meghan's work for Disney's 'Elephant.'

The couple are set to be the subject of an upcoming book they are believed to have collaborated on, called 'Finding Freedom: Harry and Meghan and the Making of A Modern Royal Family'.