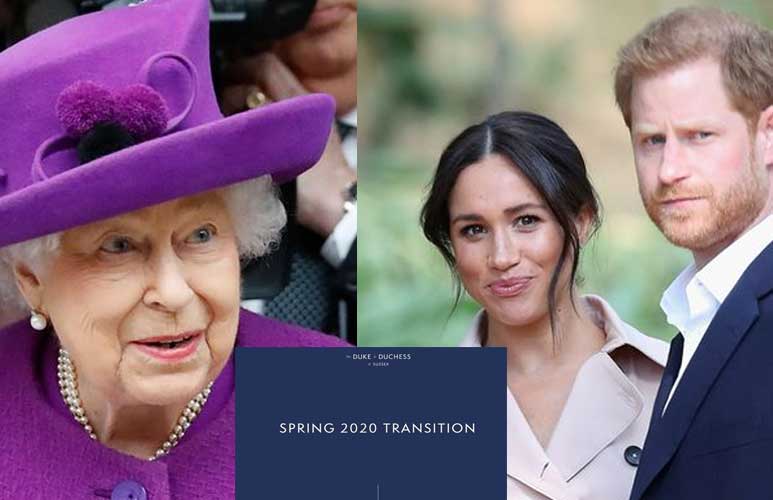 Prince Harry and Meghan Markle's underlying tensions with the palace have been laid bare in their latest bombshell statement.

It comes after the Duke and Duchess of Sussex confirmed they will stop using the word "royal" throughout their branding after they step back from royal duties next month.

In an extraordinary statement released on Friday, Prince Harry and Meghan hinted at the tense negotiations as they detailed the "revised role" they will be taking on in the next year.

They also appear to complain about not being allowed to seek outside employment while remaining working members of the family, as is the case for some other titled members of the firm.

The couple will no longer carry out royal duties as of March 31, although they will still receive police protection because of Harry's military service and Meghan's "independent profile".

They also said they no longer plan to launch their own foundation and have abandoned plans to trademark Sussex Royal, as per the Queen's request.

Reports in the US suggested Meghan had told pals there was 'nothing legally stopping them' from using Sussex Royal despite the Queen's ban.

The Queen called on her senior legal advisers to outline the case enshrined in UK law banning the use of the word “royal” for financial gain, prompting their latest bombshell statement.

It means they cannot use Sussex Royal on merchandising, despite having already spent thousands on doing just that on a range of goods from T-shirts to bandanas and literature. They will also have to choose a new name for their planned charitable foundation, which was due to use the label.

But in their new statement, the couple claim the Monarchy and Cabinet Office had "no jurisdiction over the use of the word 'royal' overseas".

However, the Sussexes said they no longer plan to trademark 'Sussex Royal'.

The statement, published on their official website sussexroyal.com, reads: