According to the Kenya National Bureau of Statistics (KNBS) census data released yesterday, the number of employed women as at August last year outnumbered that of men.

This translated to women accounting for 50.2 per cent of the working population and would burst the myth that men are the sole bread winners in the country.

The numbers of women in employment increase among people in rural Kenya, where there are 600,000 more women than men that are engaged in economic activities.

The numbers also reveal that about half of the Kenyan population is outside the workforce, with KNBS putting the number of people looking for work or who cannot find work at 2.62 million, while another 18.93 million are classified as being outside the workforce – and include housewives, the retired, incapacitated and the too young to work.

“The results show that the economically active population was 22.3 million, comprising the working (19.7 million) and those seeking work (2.6 million). Females accounted for 50.2 per cent of the total working population,” reads the KNBS report. 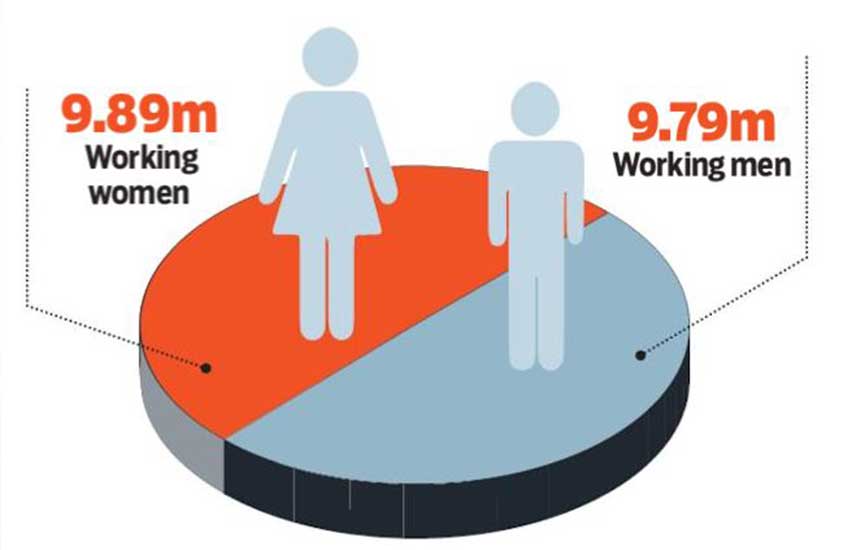 ALSO READ: Ruby on running a business during a pandemic

“18.9 million individuals were outside the labour force during the reference period. There were 10.1 million youth aged 18-34 and 4.1 million youth aged 15-24 in the labour force.” “Persons outside employment is what was referred to as the economically inactive and includes full time students, home makers, the retired, incapacitated persons and those who are either too young or too wold to work.”

It is in the rural areas where the number of women in labour force is glaringly larger than of men. A total of 7.23 women reported to have been working, against 6.63 million men.

A total of 13.8 million people in rural Kenya were in some form of employment, while an almost similar number, 13.29 million, were outside labour. A further 1.28 million are looking for work.

The numbers appear to give credence to claims that women are burdened with the more difficult but less rewarding jobs of running smallholder farms across rural Kenya, while the men in the countryside do little but mill around the trading centres.

They also show there are more men in high paying jobs than women.

In urban areas, however, there are more men in labour force than women. Data shows that of the 5.8 million that were in employment across different urban areas in Kenya, 3.16 million (54.4 per cent) were men while 2.64 million (45.6 per cent) were women.

The major towns in Kenya report a total population of 12.78 million, with more than half the men living there reporting to have been engaged in some kind of employment. “The proportion of males in the urban areas that reported having worked was 50.4 per cent compared to 40.6 per cent of females,” says the report.

ALSO READ: I started my fashion business with stock worth Sh12, 000

I started my fashion business with stock worth Sh12, 000