The secret retreat: Inside Meghan Markle and Harry's new home It's tucked inside the grounds of the Royal Family's secret retreat - but Frogmore Cottage will soon become one of the most famous homes in the world.

Prince Harry and Meghan Markle are reportedly leaving west London and moving into the 10-bedroom home, near Windsor Castle, to raise a family in a quieter setting amid alleged "tension" with Prince William.

The Queen is giving them their own pad on a Windsor estate - Frogmore House - that's been a favourite royal hideaway for more than 300 years.

The Grade II-listed cottage is said to be undergoing a multi-million pound refit, paid for by the taxpayer, before pregnant Meghan gives birth to the couple's first child. 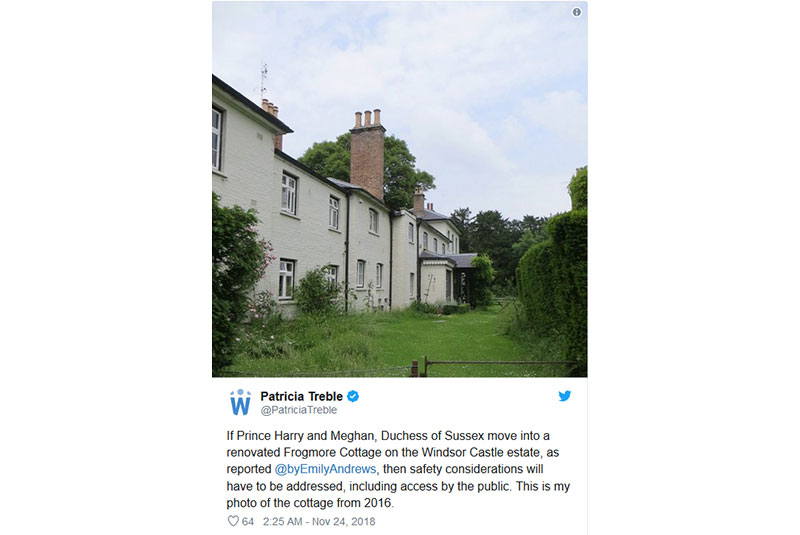 The Duke and Duchess of Sussex, whose due date is in the spring, will move into their main official residence next year once the refit is complete, according to reports.

It is claimed that they had planned to move into one of Kensington Palace's main apartments, next to William and Kate, but there has been a "bit of tension" between the brothers.

It is likely that it will get a full security upgrade to keep prying eyes away. Previously, the public could walk right up to the property, which was surrounded by a small fence with a sign reading "Private". The couple currently live in their first marital home, a cottage in the grounds of Kensington Palace in west London, where Prince William and Kate Middleton also reside.

Frogmore Cottage has more than enough space for the Sussex family and a nursery for their baby - and even a gym or a yoga studio - with 10 bedrooms.

Formerly known as Double Garden Cottage, the home is set within Windsor Castle's Home Park and faces the stunning and sprawling grounds of Frogmore House, which will no doubt become a more popular stop on the Windsor tourist trail. 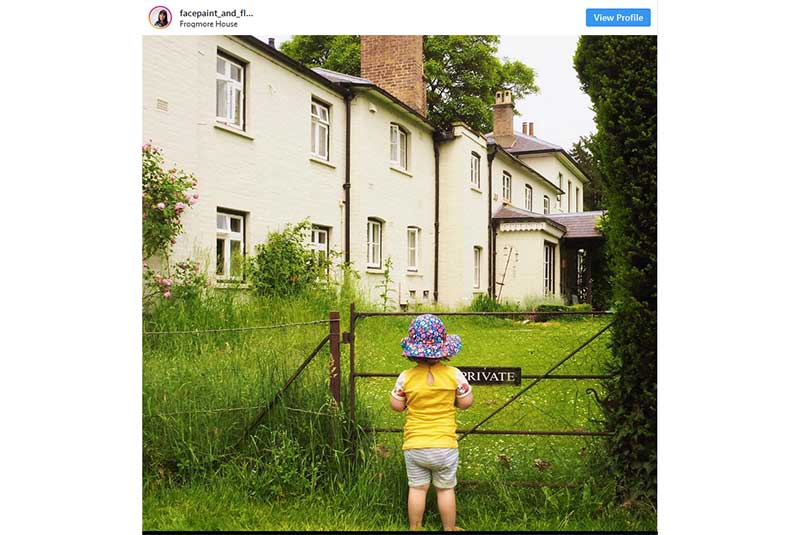 The cottage is currently divided into five units which were home to royal staff, but it will be transformed into a family home with modern amenities.

Frogmore Cottage is set in an area that has sentimental value and many memories for the Duke, 34, and Duchess, 37,

It's not far from Windsor Castle, the Queen's summer residence, and St George's Chapel, where Harry and Meghan tied the knot in May as millions around the world watched on TV.

Their wedding reception, hosted by the Prince of Wales, was held at Frogmore House, which was also where the couple's engagement photos were taken.

Frogmore House is in a peaceful and secluded location, surrounded by 35 acres of lush vegetation and Berkshire countryside.

The estate has its own lake, Frogmore Lake, and is home to the Royal Burial Ground and the tomb of Queen Victoria and Prince Albert. 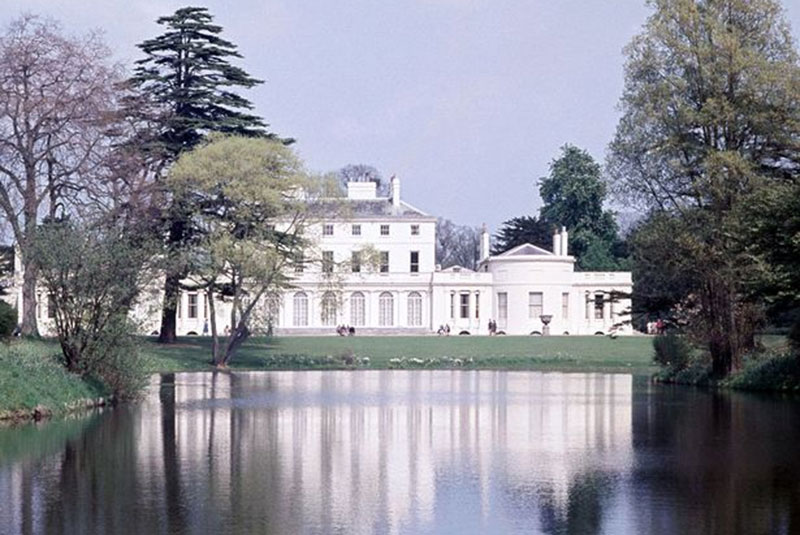 Frogmore House was once home to Queen Victoria's mother, the Duchess of Kent, for almost 20 years. Her remains are also held there, in an elegant mausoleum.

The House - built in the 1680s and purchased by Queen Charlotte, wife of George III in 1792 - is open to the public just one month a year, in August, plus three charity open days.

The sprawling grounds allowed Queen Charlotte to indulge her love of botany, as the garden was filled with many rare and unusual plants.

Tickets cost up to £35 a person through the Royal Collection Trust.

Inside, there are grand and elegant rooms - including one decorated by 18th-century flower painter Mary Moser. Princess Elizabeth, the daughter of George III and Charlotte, painted garlands in The Cross Gallery.

The Britannia Room is furnished with items from the Royal Yacht Britannia, which was decommissioned in 1997.

Watercolours by Victoria's daughters, princesses Victoria and Louise, are still in the house.

Public access is extremely limited because Frogmore House is still used by the Queen and other members of the Royal Family as a private retreat. Frogmore House was built by Hugh May, Charles II's architect, and given a name that refers to the abundance of frogs in the surrounding marsh.

It became a royal residence about 100 years later and has become a hideaway for royal couples and families, the Queen and the Duke of Edinburgh and their children.

Victoria was fond of Frogmore's peace and quiet, and it is said to have been her favourite retreat, visiting during her long widowhood and working on her papers there.

Frogmore Cottage was once home to Abdul Karim, Victoria's "Munshi", or teacher. George VI and the Queen Mother honeymooned in the grounds in 1923.

Harry and former Suits actress Meghan are currently residing at Nottingham Cottage in the grounds of Kensington Palace.

It is claimed that the couple opted for secluded Frogmore Cottage over a flat next door to the Duke and Duchess of Cambridge. 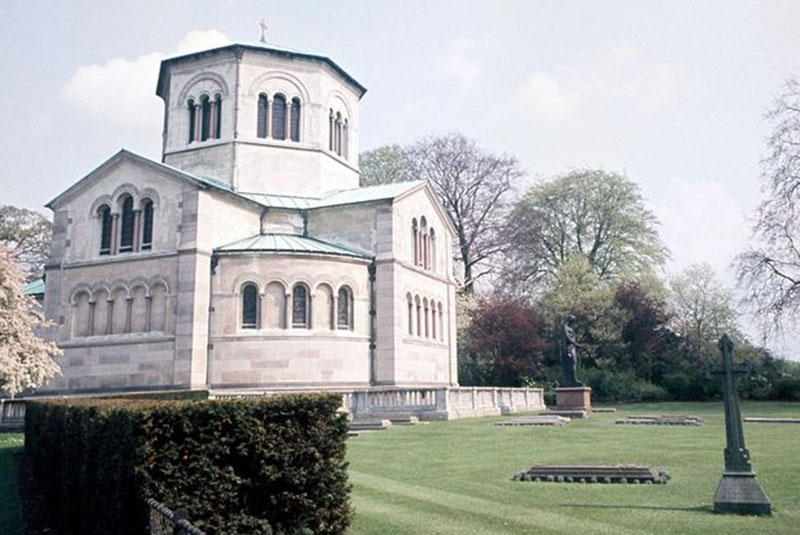 The Sun quoted an unnamed "royal source", who said: "The initial plan was for Harry and Meghan to move out of their cottage in the grounds of Kensington Palace and into one of the main apartments.

"But there has been a bit of tension between the brothers.

"Now Harry and Meghan don’t want to live next to William and Kate and want to strike out on their own."

The couple "need more room" and hope the Frogmore Cottage renovation will be complete before they welcome their baby, the source claimed. Kensington Palace has declined to comment on the reports.

The Duke and US-born Duchess of Sussex will keep their country home in the Cotswolds while they reside in Windsor.

Meghan Markle
Prince Harry
The Duke and Duchess of Sussex
​