Hats off to the unsung heroes in the dating world 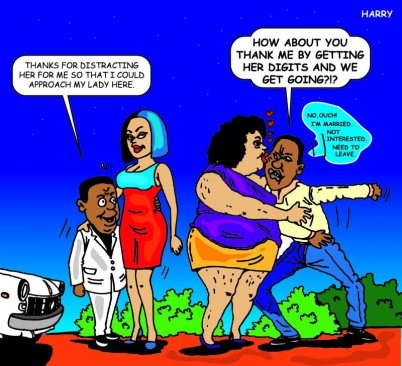 Hats off to the unsung heroes in the dating world

Every man knows that your balls always desert you the day you meet the most beautiful person you will ever want to marry. You may be tall, have balls of steel, and the butchest man alive, but in the presence of your crush, you are totally helpless.

That is how life is structured. Even the most powerful, strongest man has that one woman who totally overpowers him.

It takes a wingman to come to your rescue. The wingman must subdue his lust to the said woman and ensure that he delivers the woman to you. Given, he has nothing to lose; he can always make the first move. It is a risky job. But someone got to do it.

Wingmen protect us from rejection. They advise and guide on how to handle our liquor lest we make fools of ourselves. Often we do. Theirs is a thankless job. They may make the connection, mediate on your behalf, but ultimately the task of winning the woman lies with you.

Wingmen fill in for the confidence deficit that invariably bedevils us in the dating minefield. They reassure us, like DJ Khaled style in music, that we are the best there is in the world. And without them, we may die without ever telling those we love our truest feelings. And that is sad.

We always get buoyed by their boosting of confidence, by breaking the ice and making the crush on the other side of the room human.

Women too, have their wing-persons. Often for the opposite reasons men have: to cock-block men. Beautiful women by design or coincidence have this annoying habit of hanging out with their plumper, darker friends with stinking attitudes.

Men have to deal with this to get through to the beautiful lady. And often, they do a terrible job. The classic route involves sending a wingman to court the less attractive friend, so as to deliver the beautiful woman to the man who is hankering after her. It works, half the time. Unless the friend proves a possessive freak whose whims work against the plan

I understand the insecurity of beautiful women. But by using such a method, sometimes, they end up losing a valuable prospective person over the pettiness of their friends. Women need to tread careful here.

Such friends sometimes are influenced by a jealous trait rather than by a genuine desire to keep players at bay. And nature has it that men tend to ignore them, and they can erect some bottlenecks that are impossible to surmount.

Single parents, I gather, have the best wing person in the name of their children. I recently saw a tweet to the effect that the children act as the best filters. If the woman or a woman accepts the child or treats them respectfully, it means they are good people and good to date. Beat that.

Either way, we need to appreciate the sacrifices of wing-persons and we must all step to role play should the need arise. And be grateful for the job they do always.

Five ways humility is holding you back