The worth of a healthy woman

The worth of a wealthy woman

ALSO READ: What happens to your body when you skip meals?

You know women are in a room when perfume rents the air amidst a cacophony of discussions. The venue is Amboseli boardroom at Hilton Hotel; packed with women from all walks of life.

It is 10am and three speakers are scheduled to take to the podium. When it comes to women forums, who else better than Eve Sisters? While gloomy weather persists outside (it was drizzling and cold) tens of women find warmth interacting with others of the same species. This month's event was sponsored by Kenya Dairy Board.

“I love this forum,” Bella Njeri, one of the attendants expressed her awe at the event last Saturday. But she wasn’t the only one who felt humbled to be in the midst of like-minded peers. Kanini Ng’echuka felt that she couldn’t have been within better space than at Hilton for this month’s Eve Woman chapter.

The theme, “A Healthy and a Happy You”, was meant to address the health of the modern woman. Dr. Supa Tunje, a consultant pediatrician in Kangundo was the first on the microphone and she didn’t disappoint. Visibly young and arguably healthy in her body, Supa took it upon herself to set the record straight regarding the importance of milk in a woman’s diet. She must have struck a nerve as she elaborated the unhealthy eating habits among womenfolk. 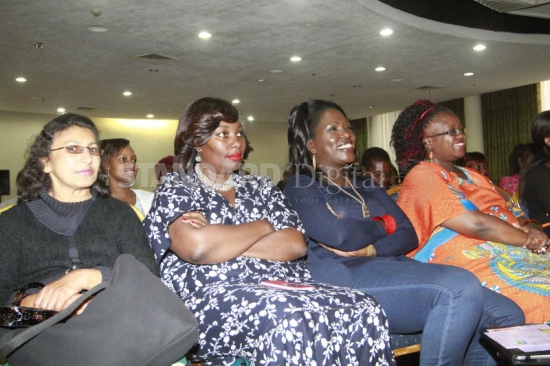 “The soda you drink has a lot of sugar, which is detrimental to your health in the long run. On the other hand, milk is a natural and wholesome drink that offers almost all essential nutrients. Why not take milk instead of the others?” she posed.

“Milk has carbohydrates,” she continued, “proteins, vitamins, minerals and water in varying quantities. It is among the best meals for pregnant women and those inching towards menopause.”

ALSO READ: Four things that cause urine to smell

Svelte in her youthful skin, Supa looked the part for an advocate of good health. She says a healthy woman equals a healthy nation.

She dispelled the myth that plant foods are healthier than animal products. “That is not accurate. Milk and animal products are the only sources of iron which is a crucial component of blood. For us women, when we lose blood during menstruation it is imperative that we get it back. Consuming lots of iron would be the surest way to get your blood levels back to normal,” she said.

But perhaps the most deserving advice came in her last line of comments:

“Everything can be good but if done in excess it becomes dangerous.”

Eva Kamiri, the second speaker, says she reached a point in her life when she didn’t like how she looked. This formed the basis of her presentation.

“After my second pregnancy, I gained weight and went from 65 to 95Kg. I couldn’t climb the stairs; it became a hard task for me. I would gasp for air and my heart threatened to burst out of my chest. I was not happy with myself and I knew I needed instant change,” she told the audience about her struggles.

For women, she noted, how healthy one is, affects many aspects of their lives. And while many would want to disguise their anguish behind smiley faces, what they feel inside keeps eating them up.

ALSO READ: Why we need to touch and be touched

“A healthy woman is a happy woman; it is hard to separate one from the other. And a healthy lifestyle involves activity and nutrition in the right measurements. Without these, or if you are doing them wrongly, you are digging a grave for yourself – and for your family by extension,” she said.

Living in an unhealthy body catches up with one pretty fast, she offered. For her, not being able to play around the house flicked the light bulb in her mind. She realized that she needed to do something to avoid imminent tragedy – lest her children lose their mother through the innocent tragedy of bad choice for a lifestyle.

Currently, she is the administrator of the Facebook group known as “Operation Lose That Pot Belly.” Throughout her presentation, Eva showed before and after pictures of women who went through the programme; the audience gasped with considerable measures of shock; they could only marvel at the tremendous results each achieved – including Eva herself.

Before her breakthrough, Eva admitted to losing money through unscrupulous methods of dealing with weight loss. The first time she joined a programme, she gained weight instead of losing it. Another time, she lost only 4kgs after spending Sh30, 000. Eva believes there are many women in similar predicaments but are yet to deal with their problems fearlessly.

“Many women who are obese or overweight feel sorry for themselves; they have given up and think they can’t go back to where they were. Ideally, we should stop procrastinating. A year from now you will wish you could have begun working on your weight today,” she advised.

At the crux of good health is nutrition. Immaculate Nyaugo, a nutritionist attached to USAid, believes cases of non-communicable diseases, euphemistically called lifestyle disease, can be directly linked to nutritional choices of subjects. She too, advised the audience to take milk instead of soda or any other soft drink for purposes of healthy living.

“You may be rich but the amount and types of food you eat are harming your body. Too much fat is not good for your heart. At the same time, when you consume many calories – more than your body needs – the extra is converted to fat. Obesity predisposes one to other illnesses like diabetes and kidney disease,” she added.

Her thoughts corroborated her predecessors at the podium, echoing calls for proper nutrition and exercise.

Deaths, she said, have occurred at hospitals in the night because a patient overfed and their systems shut down from too much work (digestion).

Presentations or none, last week’s Eve Sisters proved to be an important meeting point for women who want more out of life. Goodies flowed as attendants practiced some healthy snacking (cake, milk and tea).

As official sessions came to a close, the audience grabbed the chance to chat up the speakers in an attempt to siphon some wisdom from their own experiences.

“And isn’t Eve Sisters about sisters building each other?” one lady posed as the audience dispersed.

What happens to your body when you skip meals?

Why we need to touch and be touched

Harness the natural benefits of flaxseed

Why you should deep squat more often