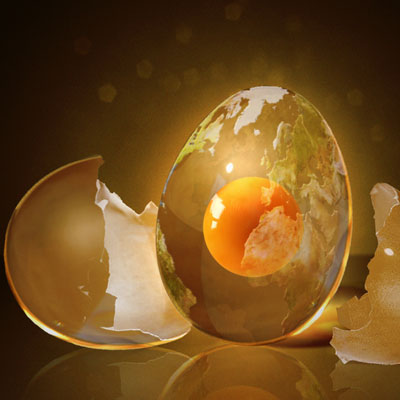 23 Year old Mum Lorraine Donakey finally gave birth to a baby girl after six miscarriages in as many years - thanks to egg yolk.

The 23-year-old gave up hope of motherhood until a pioneering treatment led to baby  Lulu-Rose’s arrival. She said: “Finally having her in my arms is indescribable. When she was born I cried my eyes out.

“Every time I got pregnant I thought it would be different. I spent thousands on baby clothes and equipment for six babies that were never born.“It was to the point where people wouldn’t dare tell me they were pregnant because they didn’t want to upset me. I didn’t find out about my brother’s baby until it was four months old.“Even with the treatment I barely believed that my baby would make it, it was always if she made it.“Now I’ve got Lulu-Rose I feel so lucky. She’s already spoiled rotten.”

The forensic psychology graduate from Liverpool suffered her first miscarriage when she was just 17 and studying for her A levels, discovering just hours before her exams that she had lost the baby.

After hearing about a new treatment available privately, desperate Lorraine found out about Rafet Gazvani, a fertility specialist at Liverpool Women’s Hospital, who was offering the pioneering treatment.

Lorraine has a womb biopsy and was told the reason she kept miscarrying was because of ‘killer cells’ that kept attacking the embryo.

She was treated using intralipid liquid, a mix of egg yolks and saline solution, which suppresses the killer cells and allows the baby to grow.

Lorraine said: “We had to pay to have the treatment privately. Luckily, my mum was able to help out and she put the costs onto her credit cards.

“I didn’t exercise and I took vitamins every day - I would line them up in the morning.”

Thankfully the treatment was successful and Lulu-Rose was born at a healthy weight on January 17 this year. Lorraine is already looking to the future and a little brother and sister for her new baby.

She said: "Having six miscarriages definitely takes its toll, on my body and my mind.“But I know I want more than one baby and now I know the treatment works.“I want other women to know that this treatment is available, maybe it can work for them too.”

Childcare tips on returning to work after maternity leave

My baby has ‘tongue-tie’. Should I be worried?