It has been billed as the social event of the year that will be followed by millions of people all over the world.

Britain’s Prince Harry will today at noon get married to Hollywood actress Meghan Markle in one of the most anticipated weddings in recent times.

Some 100,000 people will line up the streets next to Windsor Castle in Berkshire, UK, to catch a glimpse of the couple on the way to the wedding venue at St George’s Chapel to an invite only event. The rest of the world will have to watch on TV.

A statement from Kensington Palace on Thursday said Ms Markle and Prince Harry wanted “members of the public to feel part of the celebrations too”.

Harry, 33, sixth in line to the throne is a former British Army lieutenant who served for two years in Aghanistan while Meghan, 36, was until the announcement of their engagement in November last year one of the main casts of Hollywood series Suits.

They met less than two years ago on a blind date fixed by a mutual friend whose name they have refused to reveal but Harry has in several interviews said it was love at first sight.

“The fact that I fell in love with Meghan so incredibly quickly was sort of confirmation to me that everything was just perfect. It was this beautiful woman just sort of literally tripped and fell into my life. I fell into her life,” Harryrecently told American CBS News.

Their romance has been compared to that of Harry’sfather, Prince Charles, and the late Princess Diana for breaking the rules of the British Royal family tradition. Like Diana, Markle is a commoner but also a divorcee while Harry was for a long time viewed as the bad apple in the royal family.

This is part of the reason that the ratings for today’s ceremony have hit the roof. Since the announcement of their engagement in November last year, the world has been filled with speculation about every minute detail about their wedding.

And royal weddings don’t come cheap. British publication, the Independent has estimated the costs for today’s wedding to hit Sh4.6 billion without factoring security which may hit Sh4.3 billion due to terrorism fears.

“Despite the fact that the wedding is not being held in central London, the estimated cost is higher due to heightened threat levels in the UK, following a spate of attacks over the past 18 months, as well as the risk arising from Prince Harry’s link to the British military,” said the paper.

There is still speculation about which dress Ms Markle will be wearing but global broadcaster CNN said there is a high chance she will be dressed by Ralph & Russo, a high end British brand that designed the dress she wore for her engagement. It is estimated that the bride’s wedding dress will cost Sh33.8 million.

The splashing of dollars will extend to virtually every aspect of the wedding with the cake baked by London based celebrity pastry chef Claire Ptak of Violet Bakery set to cost Sh1.3 million. The flowers chosen to the taste of the bride will cost Sh6.7 million.

And the spending won’t end there. The Queen will host a first reception for the couple and their guests immediately after the service at St George’s Hall in Windsor Castle and in the evening, Prince Charles will host another reception for 200 close friends and family.

As expected Prince Harry’s best man will be his brother William who will miss today’s FA Cup final between Chelsea and Manchester United. Kensington Palace said Prince William was “honoured to have been asked” and was looking forward to supporting his brother. As the patron of the Football Association of England, the Duke of Cambridge always presents the trophy to the winners.

Meghan’s mum, Doria Ragland, will be attending, but his father Thomas Markle will not. Prince Charles will walk the bride down the aisle - saving the day after a turbulent week.

The US actress asked her future father-in-law to give her away after Mr Markle officially pulled out of the big day due to ill health. In a statement issued through Kensington Palace, Meghan Markle said: “Sadly, my father will not be attending our wedding. I have always cared for my father and hope he can be given the space he needs to focus on his health.”

Part of the package

“I would like to thank everyone who has offered generous messages of support. Please know how much Harry and I look forward to sharing our special day with you on Saturday,” she said.

In Kenya, luxury Windsor Golf Hotel and Country Club, in a partnership with the Standard Group and the Samantha Bridal show, will host a Sh1 million a couple event to commemorate the royal wedding. As part of the package, couples will get a night for two at the hotel and a helicopter ride to Mt Kenya for breakfast.

Lydiah Wambui, one of the organisers told the Saturday Standard that the 20 slots are almost filled up and they are looking forward to today. “It is something we have never done before and we wanted to make something special for this wedding,” she said. 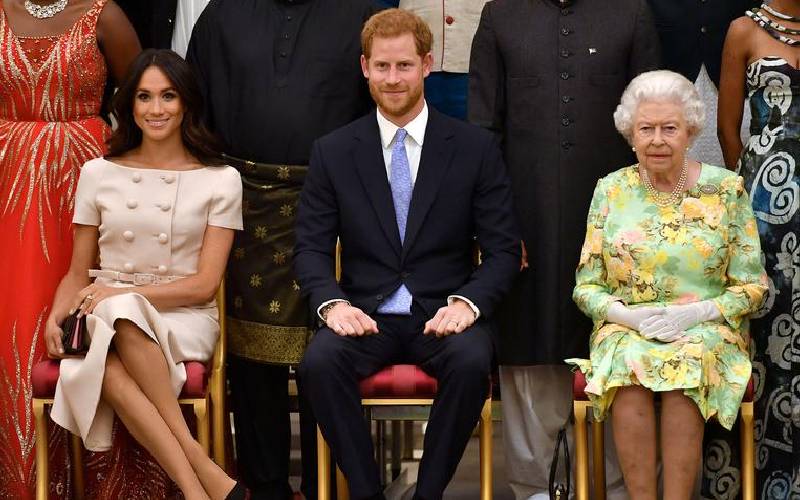 Prince Harry says he made sure queen was 'protected' during recent trip
Harry and his wife Meghan met the queen at Windsor Castle on their first trip to Britain since quitting royal duties in March 2020.
World
By Reuters
2 months ago
.

By Reuters 3 14 days ago
UK condemns court decision to block Rwanda deportation, will not leave convention