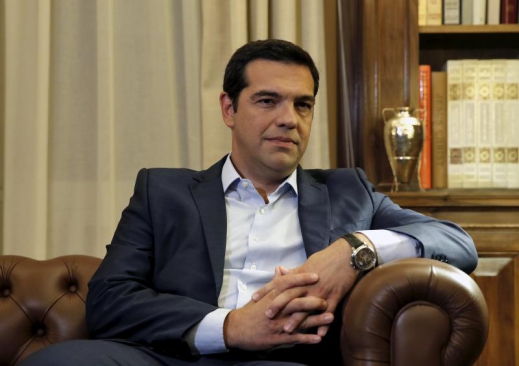 Prime Minister Alexis Tsipras resigned on Thursday, hoping to strengthen his hold on power in snap elections after seven months in office in which he fought Greece's creditors for a better bailout deal but had to cave in.

Tsipras submitted his resignation to President Prokopis Pavlopoulos and asked for the earliest possible election date.

Government officials said the aim was to hold the election on Sept. 20, with Tsipras seeking to crush a rebellion in his leftist Syriza party and seal public support for the bailout programme, Greece's third since 2010, that he negotiated.

"I will go the president of the republic shortly to submit my resignation, as well as the resignation of my government," Tsipras said in a televised address before he met Pavlopoulos.

Faced with a near collapse of the Greek financial system which threatened the country's future in the euro, Tsipras was forced to accept the creditors' demands for yet more austerity and economic reform - the very policies he had promised to scrap when he was elected in January.

"I want to be honest with you. We did not achieve the agreement we expected before the January elections," he told the Greek people.

"I feel the deep ethical and political responsibility to put to your judgment all I have done, successes and failures."

His decision deepens political uncertainty on the day Greece began receiving funds under its 86 billion-euro ($96 billion) bailout programme, five years after a previous government took the first bailout from the euro zone and IMF.

But a snap election should allow Tsipras to capitalise on his popularity with voters before the toughest parts of the latest programme - including further pension cuts, more value-added tax increases and a "solidarity" tax on incomes - begin to bite. This may allow him to return to power in a stronger position without anti-bailout rebels in Syriza to slow him down.

Jeroen Dijsselbloem, who chairs meetings of euro zone finance ministers, said he hoped the resignation would not delay or derail implementation of the bailout package.

"It is crucial that Greece maintains its commitments to the euro zone," he said in a statement to Reuters.

Tsipras had long been expected to seek early elections in the autumn. But he was forced to move quickly after nearly a third of Syriza lawmakers refused to back the programme in parliament last week, robbing him of his majority.

A leading rebel, Syriza lawmaker Dimitris Stratoulis, hinted that his faction might split formally from the party, declaring a "political and social front which will be anti-austerity, democratic and patriotic".

"It will have as a goal to cancel the previous two bailout agreements and the third bailout agreement that the current government voted for, and to replace them with a policy of growth," he said.

Greece's complex constitution has special stipulations for holding elections less than 12 months after the previous vote, meaning the president should first give major opposition parties three days each to try to form a government.

Conservative leader Vangelis Meimarakis said he would have a go, although the arithmetic of the current parliament means his New Democracy party has little chance of pulling a coalition together.

"He is a bit of a fibber. He might be likeable, but he is a bit cunning," he told a news conference. "I feel he is fooling the Greek people, his comrades, and the Europeans ... Did he get a bit too much sun in August?"

Tsipras nevertheless remains popular among his supporters for trying to stand up to the foreign creditors and with the opposition in disarray, he is widely expected to return to power.

A Metron Analysis poll on July 24 put support for Syriza at 33.6 percent, making it by far the most popular party, but not enough to govern without a coalition partner. No polls have been published since then due to the holiday season.

The prolonged standoff forced Athens to shut its banks for three weeks and impose capital controls before Tsipras accepted the bailout under threat of a financial collapse and Greek exit from the euro currency.

The first installment of aid allowed Greece to make a debt repayment to the European Central Bank that fell due on Thursday.

Sudanese President Omar al-Bashir said Thursday he was ready for a two-month ceasefire with rebels to allow national dialogue talks to take place to address the country's myriad problems, offering insurgents an amnesty.