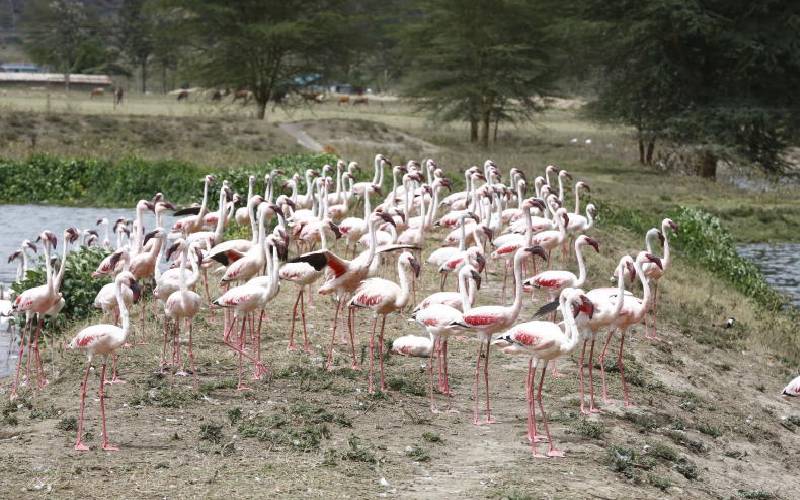 The increasing water levels in Rift Valley’s alkaline lakes has altered the habitat of flamingos, forcing a large flock to shift to lagoons.

According to Joseph Edebe, a Kenya Wildlife Service (KWS) senior researcher, the salinity of water in the lake has reduced as a result of increasing levels.

This, he said, has seen water in the lake becoming fresh, forcing flamingos to find abode in sewerage lagoons.

“Flamingos follow food and wherever they are, it is an indicator that there is food. Flamingos thrive on brackish or saline water and that is why they prefer lagoons, which exhibits the same features,” he said.

According to scientists, the rising water levels have resulted in changes in water chemistry, which has affected availability of food in Lake Bogoria, with observations indicating flamingos present are weak due to starvation.

In the latest census of water birds done in January, it was revealed that there were 6,000 flamingos in Nakuru, of which 4,000 – translating to two thirds – resided in sewerage lagoons. Only a third of the population resides in Lake Nakuru.

The flamingos specifically have found abode in the lagoons where liquid waste from industries is being treated.  Hundreds of flamingos have moved to the sprawling lagoons managed by Nakuru Water and Sanitation Services.

The phenomenon, according to the residents, is rare and was witnessed a few months ago.

“We started seeing the flamingos in the sewage ponds some months ago and they seem to be increasing in numbers. There have also been deaths recorded and we are wondering what might be the cause,” said Gilbert Cheruiyot, a resident.

The death reports of flamingos within the lagoons, the researcher said, was being investigated, with samples having been taken for laboratory tests.

“Water quality monitoring within the lagoons is also being undertaken,” said Edebe.

The effluent to sewage lagoons where the flamingos are thriving is suspected to have deposits of heavy metals. The latest waterbird counts in Lake Bogoria conducted by KWS, National Museums of Kenya and Nature Kenya indicate that it had 300,000 flamingos by January, this year.

However, KWS reports that 1,000 deaths have been recorded.

“In Lake Bogoria, preliminary results obtained from carcasses of flamingos indicate they are not getting enough food. This is due to change in chemistry of water. Results indicated that the flamingos were weak,” Edebe said.

Lake Bogoria, he added, just as Lake Nakuru, has declined in salinity, with the pH levels have declined from 10 to between 8 and 9, which is less salty. The increasing water levels in both lakes Nakuru and Baringo has also pushed flamingos to the edges, where invasive Prosopis juliflora, commonly known as Mathenge, is further interfering with the ecosystem.

The increasing water lake levels, according to bird expert at Nature Kenya Paul Gacheru, has led to declining numbers of flamingos as their food decline.

“But this does not mean disappearance of the birds. This means flamingos are looking for suitable places where they can get food,” he said.

Flamingo populations have, however, been recorded to increase in Lake Simbi Nyaima in Homa Bay County.

Although poor waste management has been linked to decline in flamingo population in Lake Nakuru, County Chief Officer for Environment Muriithi Kiogora has called for multi-sectorial approach to tame the crisis.

“It is true Lake Nakuru is experiencing challenges, starting from the catchment areas. The flamingos that have died within the lagoons might mean that they fed on toxic algae blooms. However, investigations to get to the root cause are ongoing,” Kiogora said.

Uptake of the energy preferred by low income earners declined by 39,720 tonnes even as the paraffin prices dropped to Sh84.60 per litre from Sh101.90.

By Mwangi Maina | 2 days ago