What Nairobi women think of men and their tribes 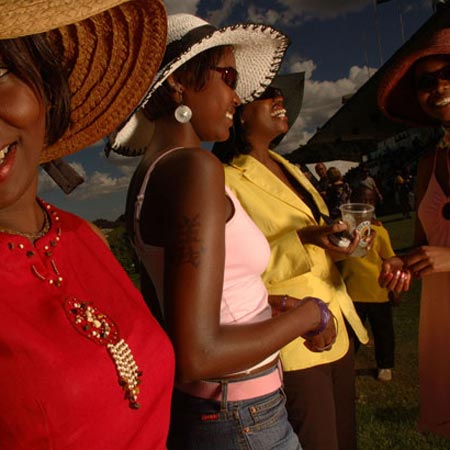 Two weeks ago, The Nairobian, ran an article on what typical tribal Nairobians think about their women.

Today, women respond by revealing what tribal stereotypes say about Nairobi men, which may or may not influence their choice of the future father of their children, anyway. While some of these perceptions might not exactly be gospel truth, others are right on the money; literally.

1. Taita men: The Taita have some of the best, poetically speaking, which is really good when it comes to ‘tuning’ a woman. Women adore the Mwandawiros and Mwang’ombes believing ‘Kiswahili yao ni mambo yote’ and are thus in demand from Kaptagat to Kaloleni. They are not only light-skinned and calm, but also collected when making decisions. They are most women’s dream.

Positive: The Wadawidas are very romantic and know how to tune (sweet talk) women. Even better than the Omondis. Most Taita men are also irresistible lookers.

Negative: Most eat small food rations and are thus ‘pin weights.’ They are “Yes” men, conformist bootlickers who are easily controlled by those in authority. They are ridiculously loyal. Ever wondered why Kibaki and Kenyatta chose Taita men as their aide-de-camp? They love sex and booze (which makes them behave like they are high on cheap Oriental herbs). Taita men are also vulgar and uncouth, spewing unprintables; embarrassing you in front of your girlfriends, when provoked.

2. Luo: ‘Jatelos’ are said to be romantic and extravagant to a fault. They will take you shopping to Dubai and dine you in posh restaurants till the next light skinned interested lass emerges. Image is everything for our Lakeside brothers. Calvin Aristotle Onassis Omondi-McOgego would rather burn quid on a Mercedes without qualms, parking it outside a grass thatched hut in Akala village!

Positive: They are the best players, and not necessarily for Gor Mahia. Not that it is something to clap home about, but if Omondi-McOgego cheats with an ‘arrangement’ you may never know as they hardly give you a reason to. They know how to treat ‘my woman’. They must have gone to the same school with the most sought after men in Africa, the Nigerians!

Negative: Calvin Aristotle Onassis Omondi-McOgego thinks of investing back home in Akala village, but fears chira... being bewitched. They are always whining, complaining and ‘fighting’ for fairness/equitable distribution of resources. Meet ten Omondi-McOgegos in a ‘Luo pub’ with loud Lingala and Ohangla music and each has 20 beers waiting for action while discussing Raila’s chances in the 2017 general elections. They also do not believe in dialogue and would rather ‘throw stone missiles’ to express disappointment, and not necessarily when Gor Mahia loses a match. Omondi-McOgego can be proud even when he has ‘nothing.’ In fact, the Omondis can live beyond their means in Nairobi, showing off, only to retire stranded in the finance department!

3. Maasai: How did the ‘Ndawuos’ and ‘Njores’ make it to number three? See, the thought of a man who kills lions with his bare hands is quite attractive away from the stereotyped ‘charcoal vendors’ clutching a spear in one hand with his red cloth wrapped around his waist or over his shoulders. Foreigners mythically believe the Maasai have a sexually potent ‘Long John Silver!’

Positive: A well groomed Maasai is very handsome. Most get   NGO scholarships abroad so that they can develop their home areas. And they do!  I mean, look at former Narok County governor aspirant, Ledama Ole Kina from Oloombokishi village!

Negative: Stay away lady for sure you will be played. Yes! They are very ruthless womanisers especially the moneyed and good looking. The worst bit about Sempeles is that they will use and leave you as soon as the next beautiful skirt wearer comes their way. The illiterate are hell to deal with and understand.

4. Kalenjin: Ears alert gold diggers, the Kip-somethings have cash. And just like Simiyus, the ‘Cheps’ only live in Nairobi to earn a living. He has a 1,300cc jalopy in Kericho, where his small farm is. Believes Kikuyus are thieves. Drinks beer/choma alone or with the ‘boys from home’ while peppering talk in mother tongue.

Positive: Save for financial stability Kalenjin men are said to be brave, strong, even-tempered and peaceful among themselves, trustworthy, sexually strict, and never neglect their culture.

Negative: They are chauvinists. They believe offering a good house and financial stability for the family is everything but ladies want to be loved and satisfied in ‘other ways’ too. Though they love the mama and totos they tend to have side dishes. They are stingy to their wives. To them, a woman and kids are the same.

5. Luhya: Most gate ‘soldiers’ in Nairobi are Shirandulas. How they manage to attract more than three wives; two in Emanyulia, Kakamega, and a ‘nyumba ndogo’ in Nairobi’s seedy Kawangware  is a mystery social scientists are still working on. Luhya men are ambitious though. Even a 40-year old Omundu strong watchman still hopes to steal his employer’s job before Vision 2030. And a promotion will surely ease the burden of bringing up families besides moving houses from Kawangware!

Positive: Depending on your libido, make sure your bed is strong enough to accommodate these bedroom bullies who according to testimonials, hardly run out of tea and chicken powered steam.  Luhyas do not like leaving evidence around so do not worry about child support when he leaves you. Luhyas are the real Africans. He will always come bearing gifts from shagz; mkarango, ingokho, guavas and sugarcane!

Negative: Always dancing to Rhumba as they discuss their amazement of the Kikuyu fiscal success story. They also love going shagz every other weekend. They eat too much Jimbi. They are very traditional with a grinding domestic mindset...if the wife threatens to run away, they slaughter everyone before unsuccessfully trying to commit suicide!

6. Kikuyu: Their ambitious and hard-working nature dates back to the era of Chief Wang’ombe whose clansmen looted Arab caravans passing through Central Kenya at the turn of the 19th Century. For that reason the Kamandes and Kariukis walk, eat and dream of kamugunda (shamba), matatus and company shares. In fact, they are often too busy minting mullah to invest in another ‘Nguno’ the cow at his kamugunda. They may even neglect Mama Gacheri, the long-suffering wife. To a Kikuyu, a woman is a social trophy during drinking sprees where discussions are pegged on how to import speed governors, and mouse for the Laptop Project for schools. These hustlers from the House of Mumbi can also trim the edges of honesty when opportunity presents itself.

Positive: They are hardworking, but every single cent must be accounted for in their mean budgetary systems. Kamande is therefore the ideal hubby for the industrious woman. Kikuyu men make the best ancestors due to that not so small matter of Old Money from a grandpa who had big financial dreams!

Negative: A typical Kikuyu man’s luxury car is a pick-up, double cabin, and he believes in relaxing in Kanyenya-ini village weeding the shamba and milking ‘Nguno’ the cow - not frolicking on the beach in Mombasa. For this reason, women think the Kamandes are unromantic and unadventurous. Their perfect date is dancing to Mugithi at Jambo Bar&Grill while tearing at roast goat ribs! If you are thinking of assuming the mother-in-law, steer clear of Kamande. Kikuyu men are mama’s boys. So the way to his heart, is through his mother. They are also said to be wanting in the fashion department and the uncultured can be very crude. A must-have in every Kikuyu man’s wardrobe include; Savco and 1.5 Freezer jeans preferably brown, Chicago Bulls T-shirts, an over- sized Kenyatta leather jacket and a ‘Godpapa’ hat whether fake or original. While drinking, a typical Kikuyu will keep squinting at the bill every two minutes!

7. Kamba: They are said to have sexual athleticism that makes them very liberal in bedroom matters. They are also known to sing loudly while drinking as they talk about sex and argue who is better between Ken Wa Maria and Kativui. All this happens in a club in Mlolongo after a good sale of second hand tyres.

Positive: They are very submissive and will do anything just to keep you around. Don’t believe this? Try calling Nzomo, your ‘Kao’ buddy from a bar at some devil hour. He will come running as his girlfriend remains behind dancing to Beyonce’s Single ladies!

Negative: ‘Wakanesas’ are cowards and easily used even if they do not get anything in return. They are also ‘watermelons’ who hardly make firm individual decisions. When drank, a ‘Kao’ can start pulling an ‘Afro Sinema’ skit!

8. Meru:’Vaite Murumes’ ego surpasses reality. It is taboo for Murume to enter the kitchen. One got sacked when a woman was promoted and Mithika was the tea boy... who could not serve a woman boss. A proper Kinoti would rather starve to death than cook. These hot tempered men do not take disappointment kindly. They are famed for either killing or breaking down in tears like a baby after rejection.

Positive: They are not only hardworking but also the best time keepers in Kenya. Ever wondered why there is always a Probox accident along the Nairobi-Thika superhighway. Well, that’s because they were probably racing   Miraa to the airport in time. For them, time and money go hand in glove.

Negative: Murume has a temper that can distill chang’aa or boil porridge. When provoked, he will very easily turn you into minced meat. Attending Washington State University does not count as the accent picked from Muringene-Kutus (and not necessarily when picking miraa) remains. They have an attitude problem. They take everything personally. They are also bossy in a relationship with Mwari.

9. Kisii: Just like their Meru brothers, the Mogakas are hot tempered. They prefer marrying Kwamboka, Kerubo and Kemunto because; they believe women from other communities lack morals. Momanyis, Makoris and Mairuras are also clingy and hopeless in love and do not know how to let go!

Positive: When Momanyi falls in love with a woman he gives it his best. When you break up Momanyi will still pursue you for months, which is an ego boost for the typical Nairobi woman.

Negative: These guys are rude, arrogant and treat women like children. They are also nagging and tend to speak in shrill sopranos when angry. They also do not know when to stop talking. They are too traditional, patriarchal and can shamelessly ask a woman for sex after spending a Sh100 on her!

10. Turkana: They rarely marry outside their community. Even the few who are educated in Nairobi still talk about marrying Msichana wa nyumbani.

Positive: Once a Turkana man tastes the benefits of education he will ensure everyone around him understands. He is not only an asset to you and your children but the community as a whole.

Negative: These men are shady. They sport navy blue three buttoned suits, which they believe matches with ‘Nairobi blue’ shirts and red ties. Truth be told, these brothers are tall, dark but nothing to talk home about in the looks department!

Premium
Eight life lessons from eight interviews
Features
By Jacqueline Mahugu
2h ago
Here is the Kalasha Awards winners' list
African News
By Standard Entertainment
4h ago
Yvonne Adhiambo: My loyalty's only to the story
Features
By Gloriah Amondi
12h ago
100 years: A social club for all seasons
Showbiz
By Kirsten Kanja
12h ago
How trends have influenced Kenyan music
Features
By Muhunyo Maina
12h ago
.