Chilling Details of The Kidney Trade in Nairobi 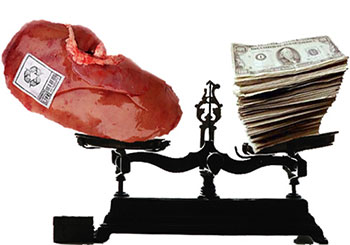 Desperate kenyans are willing to sell their kidneys for money.

Do you know your kidney could be worth Sh12.57m ($ 150,000) in the black market? Before you sell your kidney to get some quick cash, be very worried. Before you get into that flight, to go abroad, where a sponsor has gladly agreed to foot the costs, as well as pay you loads of money, be afraid.

Vulnerable and alone in a foreign country, on top of a surgery table in a backstreet hospital, under anesthesia, they might not only harvest one kidney, they might harvest both kidneys, your liver, your pancreas, your lungs, your eyes, and if there is a ready customer, your heart too. Facing grinding poverty, some Kenyans have willingly offered to sell their kidneys. The spread of illegal organ sales world over has gained momentum, being abetted by the Internet, a global shortage of organs for transplants and, in some cases, unscrupulous traffickers ready to exploit the economic misery.

They will post their details online, seeking customers. The customers will then contact the young money hungry sellers, organise for transport and accommodation to countries like Pakistan and India, where the organ will be harvested, but very few Kenyans ever come back home. The chilling details of sale of human body parts were revealed in a report filed by lawyer Isaac Baraza. “This is what we call victimless crimes. A person will be willing to sell their kidney, and they won’t discuss it with family members of even tell close friends. Once they leave the country to go donate the kidney, the sellers take advantage and not only harvest their kidneys, but also other body organs. Back in Kenya, nobody knows where the young person disappeared to.”

Globally, there is an increasing demand for organ transplants, and this global shortage of transplants makes organ trafficking a lucrative business, although it is illegal almost everywhere in the world apart from Iran. Kidneys are one of the most wanted organs today, making up about two thirds of all transplants. According to the United Nations, around 10,000 kidneys are illegally transplanted every year.

The profits that criminals harvest from illegal organ trade are huge. The average price of a kidney on the black market is Sh12.57 million but the ‘donors’ get as little at Sh200,000 if they are lucky enough to actually get out of the surgery table alive.

Leviticus Awino, a 25-year-old man would sell his for Sh2m. On Facebook, he invites interested bidders to contact him with an offer. Vanslow, 24, wants to sell his kidneys.  “I am selling my kidney because I have financial problems. My blood group is O+ and I am a non-smoker, ” says Okoth.

He says anybody interested in buying his kidney should contact him via Facebook, where he has placed his phone number and email address. These offers from Kenya are part of a global internet network for illegal organ sales.

According to Dr John Ong’ech from Kenyatta National Hospital, Kenya has over six million diabetics and over two million people in need of kidney transplants.

“The kidney is the body’s filter as it cleans 180 litres of liquid everyday day. A human can survive on one kidney but if both fail, your body will fill with harmful toxins and you can die within weeks,” says Dr Ong’ech.

He adds that the main reason why young people are most favoured for organ harvesting is because of the virility. University students and other jobless young men are major targets for the cartels that run the trade.

“A 20-year-old’s heart pumps 10 times more than needed to keep someone alive. The capacity of the heart and other body organs decreases with age, so that’s why young people are the easiest target, lured with promises of quick riches,” says the doctor.

As a medical practitioner, Dr Ong’ech admits organs harvesting, both forceful or with the owner’s consent, is a thriving industry in Kenya. “One person needs the kidney to survive, and the other person needs the money,” he says.

According to Baraza’s report, people may be kidnapped, killed and sold, especially children, for their organs. Other ways for the brokers to procure the organs are through deception or coercion.

There have been cases where a victim will go to a doctor or hospital for an unrelated illness or accident, but the person’s kidney is removed without their knowledge or consent.

“And it is not only kidneys that these guys seek, platelets and plasma (from blood) are also for sale in Kenya. Incase of a kidnapping for body parts, females are favoured because apart from the liver, pancreas, kidney, their reproductive organs can also be harvested” adds Baraza.

There have also been allegations that embassy officials of certain Middle Eastern countries in Nairobi have facilitated overseas commercial kidney transplants.

And the problem seems to be widespread. In 2003, an illegal kidney-procurement network was uncovered in South Africa where more than 100 illegal kidney transplants were performed at St. Augustine Hospital in 2001 and 2002. The donors were recruited mostly from the slums of developing countries and flown to South Africa where the operation was performed. The ‘donors’ were paid between $6,000 to $10,000 but the middlemen were said to have sold the organs for as much as $100,000

The vast sums of money to be made by both traffickers and surgeons have been underlined by last week’s arrest by Ugandan police of three people suspected of involvement in an illegal kidney trade in East Africa. They include a Ugandan military officer, an Indian professor and a university student.

According to the charge sheet, Krishna Institute of Medical Science (KIMS) in India organised, facilitated and made preparations for sending of Mathias Sekyewa to India for the purposed of removal of his kidney.

Police investigations established that upon reaching India, Sekyewa is reported to have had second thoughts about the operation and asked to return home. However, Prof. Vasudev and the medical team allegedly drugged him and extracted one of his kidneys.

Next article
Meru villagers call KWS over 'hiding lion', turns out to be a shopping bag