Living with my darkness: Blinded by robbers

By Christine Odeph | 3 years ago 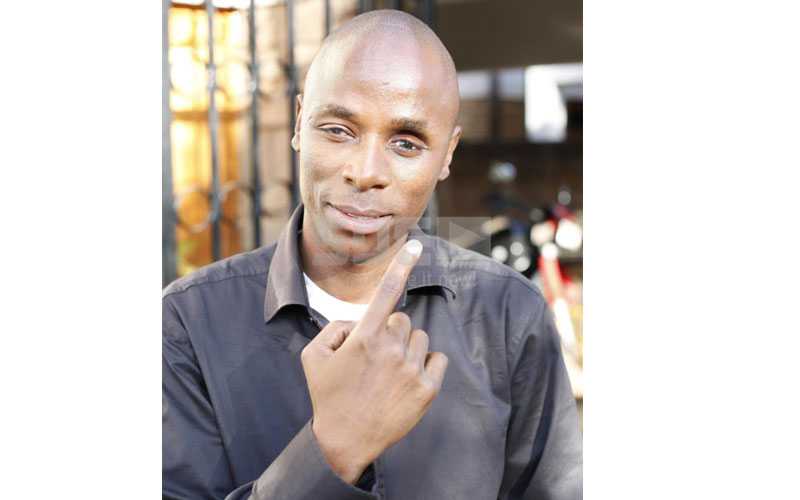 “Know about the Russian roulette?” he asks, seated across me in his tastefully furnished office. “Well, every day I cross the streets of Nairobi, I know that I could be meeting my death,” he adds matter of factly.

Polite, confident and well dressed. He is a gentleman with a brilliant smile, his handshake is firm and he is eloquent. And he dons dark glasses.

For about a minute, Ivan does not utter a word. Finally, he speaks.

“Daddy, can you see me?” my two-year-girl would ask, staring at me and I would wither a little more inside.  I was only 34. And I was angry.  Angry at life. Angry at everyone. And my wife and mother bore the full brunt of it.”

“I did not even realise it then, but I believe that I was severely depressed. The slightest thing would set me off, like having too much salt in my food.  I look back and wonder how they didn’t leave me. I was a pain, but they stuck around.”

His voice is deep; his manner calm, leisurely and commanding. And though I know he cannot see me, I sit up a little straighter. He seems to read my thoughts, because with a little smile on his face, he says, “One of the most interesting things I have discovered, is how invisible blind people are to those who can see. Sometimes people assume your ears don’t work as well; and they talk over you and about you,” he says with a laugh.

If you haven’t guessed it, Ivan is a blind man. He wasn’t always that way. At least not before 11, September, 2014. A day that was unremarkably uneventful until it wasn’t. A day in a life that seems like a life in a parallel universe.   He lived in Kisumu.

He was a proprietor of a successful garage and car dealership. He loved movies, and he loved to travel. And he was completing his academic degree. Just a typical man trying to find his way in the maze of life. And on this day, he couldn’t wait to get home to Melissa, his beautiful wife of four years and baby daughter Ashley.

“Everything is imprinted in memory down to the exact times. I suppose that is what happens when you go through a life game changer-you simply never forget any detail.”

That night, after work, his friend dropped him off a short distance from his house. It was shortly after 8:30pm.  When he was about 100 metres from his gate, he was brutally attacked.

“I was speaking on the phone as I walked, and out of the blue, someone grabbed it from behind,” he narrates. His immediate instinct was to fight back, not knowing that he was dealing with more than one person.

They began raining blows on him. In the ensuing tussle, with one person grabbing his bag, another going through my pockets while the rest were hitting him with metal bars, Ivan felt a liquid splash all over his face. It turned out to be battery acid.

“Looking back, these people seemed to have been waiting for me. Being a small town where everyone knows everyone and their business, they must have been trying to eliminate any chances of me being able to identify them. I believe that I escaped with my life because as they attacked me, I was screaming for help. The noise attracted other people, forcing them to flee.”

Ivan picked himself up, crawled the remaining distance and began to bang on the gate.

They eventually opened the gate and he staggered into the compound, lamenting about the burning and itching sensation in his eyes.

“I was rushed to hospital and I remember struggling to open my eyes.  It felt like there was gum in them and everything was blurry. I had also lost most of my teeth. It took about half an hour or more to get to hospital.”

The hospital insisted on a cash deposit before attending to him and even after admission, there was no ophthalmologist in the hospital.

“It was one of the most frightening nights of my life,” he says, a faraway look in his eyes.

“I remember lying on the hospital bed with my wife beside me and I was trying to cheer her up because she was also terrified. It was crazy.”

The following morning, the doctor came to see him. And after a quick examination, he declared that his eyesight couldn’t be saved.

“I remember thinking that his delivery of the news needed some work. It sounded so…so harsh and final.  I was discharged the same day. There is nothing they could do for me. Ah, and it was my birthday. Such a cruel twist of fate.”

A friend referred Ivan to a hospital in Bomet. A day after his ominous diagnosis, he travelled to Tenwek with his wife. What followed what a lengthy and most times unbearable experience.

“I underwent 13 surgeries over a period of about two years, all the while shuttling between Kisumu and Bomet every two weeks for treatment. Both corneas were extensively damaged. I knew from the beginning that I only had 5 per cent chance of ever seeing again but I held on to that tiny hope. Some of the surgeries were so experimental that they would record while doing them.”

“One of the complications that arose from my new condition was hypertension. So in some cases I could not have surgery under anaesthesia. During my first surgery, a nurse had to do a procedure called ‘blocking’ which involves a very long needle going straight into both eyeballs four times and four times again on the eyelids. You do not know pain until you have had this. My entire body went into shock.  I did not even know that one person could experience such pain and live to talk about it.”

Because of complications, his left eye ‘exploded’ forcing the doctors to completely evacuate the entire eye.

“After surgery I woke up in so much pain. I was grabbing at the bandages in the cavity and they had to sedate me again. That was when I realised that my sight was really gone.”

The road to acceptance

The medical interventions had cost them a lot.

“We had to liquidate our assets, our savings were depleted and my family moved to my mother’s house. Even my business failed without me to run it. And my wife had to go back to formal employment as I found my way back.”

Ivan has about 3 per cent sight left, and can only tell if it is daytime or night-time. In 2016, as he was listening to the news he heard about the Kenya Society for the Blind in Nairobi. He made the decision to move to the capital and begin his rehabilitation.

“I wanted my independence back. I learnt how to use Braille, which took me 9 months. I also quickly realised how expensive disability is for the common man.”

Not one to be cowed by life’s challenges, he uses public means every single day between Nairobi and Kitengela and carries a bag containing extra clothes with him.

“The threat of falling into manholes is part of my life now. Blind people fall all the time; it all comes down to how fast you get right back up!” he says with a cheerful laugh.

On what he misses most about being a sighted person, Ivan says without hesitation, “The independence. A walk that would formerly take me 15 minutes can now take more than one hour. I try to do normal things like making myself some tea, getting around etc., but it is not easy. A person with disability has to plan the day well in advance and in most cases I would need a guide to get around.”

If he got his sight back for a day, what would he want to see? I prod.

“I think this happened to me for a good reason. I have found more purpose in my life while being a person with disability. There is a self-fulfilment and inner peace I have now that I would not reverse.”

Today, Ivan runs a non-profit NGO he started with his friends, the New Age for the Visually Impaired (NAVI)

“We hope to change the lives of persons with visual impairment, granting them equal opportunities in an increasingly competitive world.”

“Sighted people take a lot for granted!  Do not. Savour life and don’t take it for granted. You don’t know what you have till you have lost it. I know.”