By Crazy Monday team | 4 years ago 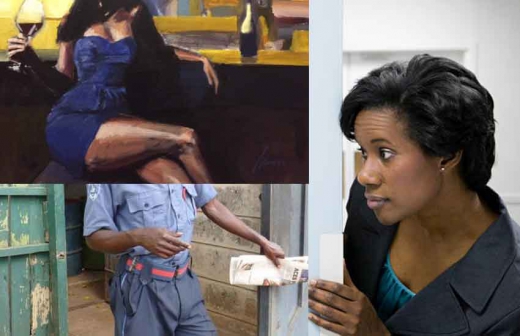 Kenyans have a tendency to look down upon lowly people in society. Take, for instance, watchmen, barmaids, house girls, shopkeepers, drivers, just to mention a few.

The catalogue of disdain and how badly Kenyans treat these low class workers, most of whom are from disadvantaged backgrounds with limited options, is quite lengthy.

Most house girls, for example, hardly share the dining table with the families they work for. Instead, they eat from the kitchen and operate from there, even when the family is having a good time in the living room.

“If only Kenyans knew how much of their little, dirty secrets are with such workers, they would never mistreat them.

Some of the information is scandalous enough to break marriages, to institute criminal charges or to permanently damage reputations,” a personal driver to an MP says, adding that they know who engages in illegal businesses but can’t reveal lest they get fired.

“Some of the things we hear in those phone conversations are incriminating enough to interest CIDs and NIS (National Intelligence Service) guys.

Even the places we take our bosses at night for meetings with people with dodgy characters or to meet their secret lovers would really interest the authorities or wives,” he chuckles.

The spies at DCI headquarters and in the National Intelligence Service think they are on top of things in this country.

It might, however, shock them that the average watchman, shopkeeper, barmaid or house girl has ‘intelligence’ that they have no clue about.

See that bored look on the watchman or on the faces of his ilk when serving you? Let it not deceive you. Those fellows hardly miss a thing. They are hawk-eyed and keen than your average trained and experienced spy.

The mind of that ever-absentminded shopkeeper at the estate gate is a minefield of clandestine information that would put to shame an investigative journalist or cop. These information databases are mostly found in the residential estates, especially areas that teem with humanity.

In Eastlands, Nairobi, for instance, it is common for shops and bars to share the same premises with tenants, not to mention schools and churches.

Now picture the sort of information that a hawk-eyed ‘spy’ can gather in such a place.

The first information archives are the house girls and shopkeepers. They know who is who, what is happening but what would not appear in your daily newspaper — like the couple that fights every night.

The house girls know who has a lazy, silly wife who asks house helps to wash their underwear. They know who denies their spouse conjugal rights and why. They know which couple has noisy sex.

The so-called mama nguo; the women who cook, clean and wash in bachelors’ houses for a fee are so trusted by such men that they are left with keys to such houses.

They know who uses Viagra and other libido-boosting medications for they know such men’s dustbins inside out. They know who wears designer clothes, shoes and all but has rags for underwear.

They, too, are much aware of those braggarts who only project an outward image of opulence but starve or only afford food that no self-respecting dog would ever bother about.

Kamau wa Njoki, a shopkeeper in Nairobi’s Kariobangi North, says he has seen what men and women are all about, but he dare not divulge secrets because that would mean the death of his business because customers would run from him.

He talks of having seen men and women who cheat discreetly for years on their spouses and is familiar with those in well-pressed suits, designer suits, Italian shoes and prance around like peacocks but start borrowing from the kiosk barely hours after payday.

He, for instance, talks of a man who leaves every morning for work, but often sneaks back mid-morning when his wife is away. He needn’t wonder what a man would be doing at home when his fellow men are toiling in town or industrial area.

“I did my investigations and my intelligence has it that the man returns to ‘service’ the house girl. The very girl the woman of the house loudly calls ‘stupid’, ‘disorganised’ and ‘ugly,’” he whispers, amid a chuckle.

On housewives who remain behind when their husbands have gone to toil, he stops short of calling them terrorists.

“Fights, quarrels, petty jealousies, hatred, witchdoctors sneaking in while husbands are away... the things I see in this place are amazing!” he muses with a wry smile.

It’s young men who amuse Kamau most. “They come and engage you in long-winded stories without really saying what they want.

Or they just hung around shifting nervously from one foot to another. But when the last customer goes, they mumble “Ile (that),” while pointing at condoms.

The informer notes that Sunday afternoons, ironically after the church service, are the best selling days for these seemingly precious commodities.

Caleb Oluoch, a shopkeeper in Huruma, notes with disdain that there is this group of people who borrow from him when they are broke, but the moment they get money, they sneak past his shop at night with huge supermarket plastic bags, full of goodies.

“They disappear without a trace only to reappear when their fortunes start dwindling, yet they have not paid even the initial arrears. Others even change routes to avoid being seen,” Oluoch complains.

Another group of secret keepers are chemists who operate within estates. They have seen it all. Apart from people buying unprescribed drugs, there is another commodity that goes like hotcake over the weekends — emergency pills.

Mercy Ndunge, a chemist attendant, says what tickles her most is how men behave when they walk in to buy this crucial medication.

“Most of them are ridiculously shy while others offer wild stories like how they are buying the pills for friends who are going to talk to students about the effects of HIV and Aids!”

She laughs at how fast they disappear the moment they get the goods — lest, perhaps, their girlfriends conceive while they are still talking to her.

Apparently, such chemists know who has procured the highest number of abortions in the estate.

A certain Kendi, who broke up with her boyfriend not long ago, says she rarely talks to watchmen after one of them whispered her life history to her new boyfriend.

For only Sh200, he gave a vivid account of how she lived and the number of male friends who came to visit and for how long they stayed the sleepovers and all.

Fred will, however, forever be grateful to watchmen. Following a series of domestic squabbles with his wife, the watchman called him one evening and warned him not to come home.

“Boss, I have seen some people with madam and they don’t look like good people. Don’t come home tonight,” he was warned.

And sure enough, when he took the precaution of coming home accompanied by two police officers, he found five strangers armed with crude weapons lounging 100 metres from his gate.

The couple has since split. The watchmen, too, know who masquerades as a regular woman yet she is a prostitute. He also knows all those girls who have sponsors in your ‘plot’.

But it is barmaids that take the trophy. They know when you are broke or whether you are a gangster, the moment you walk through the door.

“We meet all manner of people in pubs. Our experienced eyes can easily tell us your HIV status, how many illicit flings you have had in two months and how much you are stealing from your employer,” laughs Alice Omwenga, a barmaid in Nairobi.

She says, the moment a man strolls in the bar, they size him up and know all men who walk around with pistols.

They know other intimate stuff like who is polygamist or whether you own a toilet in the village or you are the type that uses a nearby bush for your ablutions.

They know men who never pay bills, those who always mooch on their friends and those that are certain to die for one reason or other.

Due to experience, they can sniff a ‘clean’ prostitute from a mile off as opposed to one who will lace your drink and rob you dry.

Barmaids are also better placed to get that extra cash to supplement their income because men value the price of silence.

They would hate rumours concerning their constant patronage of the dingy lodgings behind the bar filtering to the wrong people.

A story goes of a man in Nairobi’s Mathare North who slapped a barmaid but what followed made him sober up. He left the pub reeling from a severe tongue-lashing peppered with intimate details of how and why his wife strays.

The man, a father of two, could only thank his stars that his wife was nowhere within earshot as he was publicly torn to pieces.

His ego bruised, he tried to beat her up, but quickly learnt that you can’t touch a popular barmaid. Fellow patrons told him to dare. So don’t think your life is a secret because you sleep with your door shut and barred. ‘Big Brother’ is always watching.