Fear of the delivery rooom: Should men watch their women give birth?

By Crazy Monday team | 4 years ago 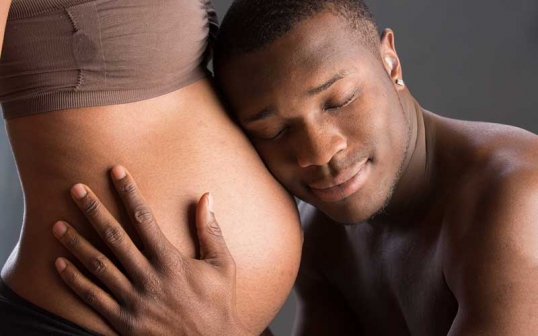 While baby making is an enjoyable joint-activity between a man and a woman, child birth, the painful bit, is normally left to the woman. After all, and holy Book has it, child birth pain is God’s curse and punishment to women after Eve misled Adam into sin by disobeying Him.

Thus, yes, to borrow women’s parlance, ‘we’ may be pregnant, but expecting ‘us’ to experience the pain of childbirth together is pushing the joke a bit too far!

Tales have been told of men who conveniently travel far away from home just a few days before their wives give birth. Some of the reasons men give for fear of being present in the delivery room during their children’s birth are, to say the least, absurd, and if not, plain hilarious.

Philip, a Nairobi-based business man and father of three, proclaims he can never watch his wife give birth, terming the process, “graphic and traumatising to witness”. He says on all the three times his wife gave birth, he was away, claiming that it’s not child birth is team work of sorts which couples must actively be involved.

Hear him: “Child birth is so traumatizing and graphic. In fact, whenever my wife is due, I always go on safari. I don’t want to be around to be asked to tag along or even being coaxed into the delivery room.”

He goes on to add: “I love my wife so much that I wouldn’t want to witness her writhe in pain and suffer. I am reliably informed that women scream on top of their lungs during delivery, and this is something I don’t want to watch.”

James, an IT consultant in Nairobi, not a father though, says he can’t watch his woman give birth. He argues that he fears watching such an experience might turn him off and ruin his sex life with her.

“I feel watching such is so devastating and would make me loose feelings and become less sexually attracted to her. I fear I may stop looking at her as a lover but just a mother,” says James.

Many a men dislike being in the delivery room, arguing that the experience is horrifying, disturbing. And one feels like he is guilty and even imagines that he is to blame for their women’s trauma. Take for instance Moses who says after watching his woman give birth, a man loses interest in her for she stops being sexually attractive.

Hear him: “After watching her in pain and wailing on the delivery table, you sympathize with her and stop looking at her with the sexual interests. Reason being, you fear making same ‘mistake’ (read, making love to her) and consequently landing her in same ‘trouble’ (read, childbirth). And before you know it, your love life dies.”

Moses winds up by sternly warning men against being present as their wives give birth. “For the sake of love and continued active sex life, men should stay away from the delivery room,” concluded Moses.

Interestingly, not all men believe in this school of thought. There is a group of men who are ready to go an extra mile; they will literally stand with their partner at the maternity bed when she is giving birth! Others may not be present in the delivery room but will hover around, impatiently pacing up and down as the operation goes on. Of course, this they do, holding their breath as they wait for good news about the ‘bundle of joy.’

Opinion is sharply divided on whether men should venture into the delivery room. Andrew, a salesman, swears that he must be there for his dear wife in such times. “At the altar, I swore to be with her all through challenging moments. Why did I mean by this solemn promise? I must be with her to welcome our baby to earth,” he says. 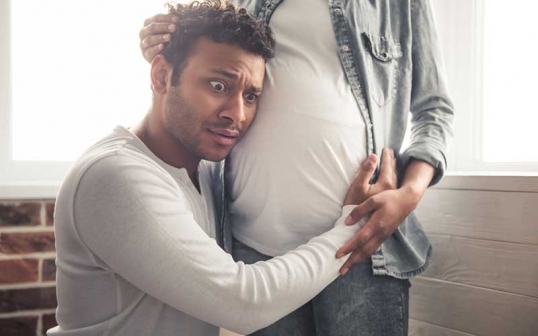 Andrew recalls one occasion, four years ago, when his wife was due with their first-born daughter. “The nurses locked me out of the delivery room. I argued, implored and created a scene until I managed to wheedle them into letting me in,” he remembers with a chuckle.

He says three years later he was back in the same facility for a similar mission. He says that when he showed up with his wife who was due with their second born, he was still in the memory of the nurses. “They remembered me as the headstrong man who forced his way into the delivery room,” he says. Of course, they allowed him in without much ado.

Interestingly, Andrew is in good company. Daniel, a retired high school teacher in Bomet County, when asked his opinion on the matter, he gave one of these writers a peering stare before replying with a tone of finality thus, “you can’t leave your loved one suffer alone in such a circumstance”.

He went on to stress that he was there when his wife of twenty five years gave birth to all his four children! “In these days of naughty quacks masquerading as midwives, a clever husband must be present to ensure no other naughty things happen,” the wizened old man goes on to buttress his point.

David, 48, a veteran driver chose to go by the dictates of his Kipsigis ethnic community regarding this topic. He keeps a safe distance and even takes leave from home during such times.

“The wise old men of my community were never seen near homes for days after the birth of their children. They did this to allow midwives to have all the freedom. Why not me? He poses.

But Mike, 28, a mechanic in Nairobi’s Donholm area, laughs at such ‘whimsical’ ideas. “A husband in the delivery room? That is pushing a joke too far,” he fumes. To him, no proper African man should enter that room.

On the flip side, opinion from women, too, is sharply divided on this matter. Vicky, a community development specialist, avers that even if she had her way, she would still not let her husband to witness her giving birth. She says she fears that him witnessing the sights and sound might compromise his sexual attraction to her.

“I wouldn’t want him to see me in that state. And again, in my Kipsigis Community, men must keep safe distance during birth and weeks afterwards,” she explains.

But to Jackie, a salonist in Bomet town, her man should stand by her during child birth. “I have seen men stay away only to come running with Ribena and Lucozade (energy drinks) when the baby has been born. I don’t like it,” she says with a sneer.

Beautah, a communication student in Nairobi, says her husband was by her side as she labored. “He assisted me a lot till our baby girl came out safely. I doubt if things would have gone so well without him,” she remembers.

She remembers him quarrelling everybody for what she calls flimsy reasons. “He literally turned into a restless busy body and couldn’t be still even for a moment; he went on asking silly unnecessary questions, till doctors threatened to throw him out,” she recalls.

In her subsequent births, she says she convinced her husband not to enter the delivery room. Medics too have their opinion on this controversial matter.

Interestingly, opinion is also divided among medical practitioners. Michael Odent, a leading French obstetrician is on record discouraging men from witnessing births of their children. To him, men’s presence is totally unnecessary and hinders labour thus resulting in interventions. He goes further to point out that there is a likelihood of emotional fall out to men after watching their partners have their baby.

Hassan Nyawanga, a nurse in Nairobi, emphasises the importance of husbands’ presence in the delivery room. Hear the good nurse: “Partner support is very important. In fact, we encourage men to be present, it is just that most men have not been enlightened on their importance during delivery.”

He goes on to add: “During antenatal care, medics encourage men to be present during their wives’ delivery. Most men don’t like being present because of fear, deeply entrenched cultural reasons, shame or embarrassment of male mid-wives operating on their wives. But still men are encouraged to be present.”

Clearly, the jury is still out to as whether men should be present in the delivery room or not. What say you?