Why you shouldn't 'be yourself' at work 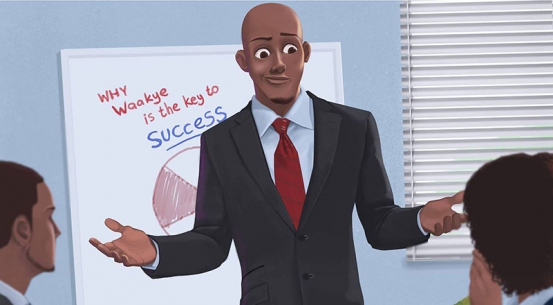 Be yourself' is the defining careers advice of the moment. It's heard everywhere from business leaders in the boardroom to graduation day speeches. It's so common it's even a hiring tool for some companies.

One person striving to successfully heed this advice is Michael Friedrich, the Berlin-based vice-president of ScribbleLive, a Canadian software company. For Friedrich, being himself involves wearing shorts to work, and telling prospective clients he's sleeping on a friend's living-room floor while he finds a home of his own.

Playing by his own rules has worked well so far, Friedrich says. Thanks to the foreign languages, and well-honed intercultural skills picked up while travelling instead of going to university, he's landed well-paying jobs. And, despite his unconventional behaviour at ScribbleLive, he's won a major promotion.

"I don't worry about image in the traditional sense. I am the way I am," says the 44-year-old. "I accept what I'm like and I celebrate it."

But is 'be yourself' good advice for everyone? Just how much of yourself should you reveal to your colleagues? And, are some of us more suited to this ethos than others?

'Being yourself' can backfire in certain circumstances, says Professor Herminia Ibarra, an expert in organisational behaviour and leadership at London Business School and Insead in France.

For instance, her research suggests that people who have been promoted are at risk of failing in their new role if they have a fixed idea of their own 'authentic' personality. Rather than adapting their behaviour to fit their changed status, they carry on exactly as before.

For instance, someone who sees themselves as open and friendly may share too much of their thoughts and feelings, thus losing credibility and effectiveness, she explains.

"A very simple definition [of authenticity] is being true to self," says Ibarra. "But self could be who I am today, who I've always been or who I might be tomorrow."

People can use authenticity as an excuse for staying in their comfort zone, says Ibarra. Faced with change, "oftentimes they say 'that's not me' and they use the idea of authenticity to not stretch and grow".

The ease with which you adapt your behaviour to fit new situations depends to what degree you're a 'chameleon' or a 'true-to-selfer', according to Mark Snyder, a social psychologist at the University of Minnesota. He created a personality test to measure this, called the Self-Monitoring Scale. Chameleons treat their lives as an opportunity to play a series of roles, carefully choosing their words and deeds to convey just the right impression, says Snyder. In contrast, true-to-selfers use their social dealings with others to convey an unfiltered sense of their personalities, he says. The problem with 'be yourself' as careers advice is that chameleons have a bit of an edge, says Snyder. That's because a lot of jobs, particularly ones that are at higher levels in corporations, call for acting and self-presentational skills that favour people who change their deeds to fit the situation.

Other research suggests it's only as you progress up the career ladder that you have the licence, power and opportunity to be authentic. It takes time to earn what sociologists call "idiosyncrasy credits".

"Senior people have tried, experimented, trial-and-errored different versions of self, found whatever works for them, and consolidated a style," says Ibarra.

"They advise students and junior staff to 'be yourself' with good intent, forgetting that it's been a 30-year process."

Part of the danger in simply telling people to 'be yourself' is that they might think that's all they need to do, says Jeremiah Stone, a New York-based recruitment specialist at Hudson RPO.

"It doesn't mean that you go into an interview or a workplace environment and you behave in the same way you would with your mates.

It means that you are engaging authentically with other people, that they get a sense of who you are and what's important to you and what your values are," he says. "It's not bad advice. It's just not particularly useful advice"

Even Friedrich is unconvinced by 'be yourself' as words of wisdom – particularly for younger people. "The advice 'be yourself' – that's starting in the middle. How can you be yourself if you don't know yourself?" he says. "Get to know yourself and find out what makes you happy."